The egotism of an obsessed man has been on public display for nearly three years now, and no, it is not whom you think.

Saturday, October 19, an estimated 1.5 million people marched throughout central London, demanding a second people’s vote on whether the United Kingdom should leave the European Union. Exuberant and cheerful, many occupying Parliament Square and the streets beyond were draped in EU flags and attire sporting its logo.

The crowd, including children, as well as dogs on leashes, were here not so much to vent their anger as they were to celebrate British democracy. For inside the venerable halls of Parliament, ministers were debating yet again the future of the country’s relationship with Europe: whether to approve Prime Minister Boris Johnson’s latest deal with the EU that would clear the way for the so-called Brexit. 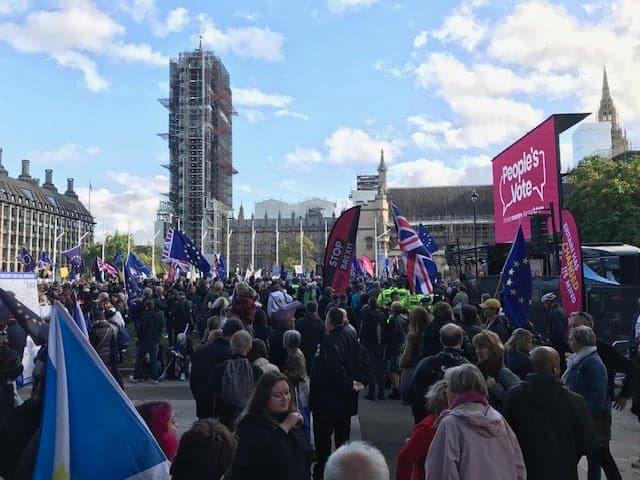 Photo by Lisa Lacher of the London protest

After listening to numerous anti-Brexit speakers, protestors cheered in ecstasy when it was announced that the House of Commons had voted, 322-306, to instruct Johnson to delay Brexit, which had been scheduled to occur, fittingly, on October 31, Halloween.

But hours later, Johnson told the EU leadership he would be damned if he would follow the orders of Parliament.

As lawmakers directed, Johnson, the Conservative who has championed the Brexit that has yet to be, sent an unsigned letter to the EU president, Donald Tusk, requesting a delay in the withdrawal deadline – and just as quickly sent a second letter telling him to ignore the first!

This is politics in the age of Johnson/Trump, when each man feels he has the power to defy convention and disrupt international relations.

Both men have used fear to propel themselves to the highest reaches of power. They have also lied frequently to bolster their cases. One placard Saturday read “They Misled the Queen.” This referred to how, several weeks ago, Johnson had supplied Queen Elizabeth II with what was alleged to be false rosy prospects regarding a post-Brexit Britain. The sovereign reported those remarks, unchallenged, in her ritual Queen’s Speech, thus appearing to give the idea a royal stamp of approval, under false pretenses.

Both men have divided their nations; many protestors told of workplaces, neighborhoods and even families torn by those on opposite ends of Brexit.

Saturday, protestors and speakers alike appealed to reason. They argued that reconsidering Brexit was needed, citing the more frequent reports of higher unemployment, underperforming corporations and fewer jobs, which economists attribute to the Brexit uncertainty.

Jackie Puzay, a Londoner, said Brexit could upset the fashion and textile industries she works in by disrupting the carefully balanced supplier trade among Britain, France and Italy. Thanks to the EU, the countries have enjoyed free-flowing commerce for 40 years.

“Suddenly,” she said, “all of that is in jeopardy” because those countries would have to spend years negotiating myriad import and export deals. “It’s going to be a nightmare.”

Other marchers asserted that Brexit would derail Britain’s scientific research leadership. Mary Corcoran, who was born in neighboring Ireland – an EU stalwart — said her European academic colleagues tell her that if Brexit goes through, new border barriers will mean some other countries’ scientists will have to lead the research project she is involved with. “There’s going to be a serious [negative] impact on research, on science and development,” she lamented.

Protestors also pooh-poohed Johnson’s claim that the EU undercuts Britain’s sovereignty by forcing the country to kowtow to laws and regulations decided in the EU administrative capital, Brussels, Belgium, and not Westminster.

“The whole thing about sovereignty is absolutely cock and bull,” David Archer, a member of the Liberal Democratic Party, which helped organize the march, declared flatly, pointing out that Parliament would still maintain control over all internal matters.

But clearly, the protestors blamed Johnson. “Boris is a liar, cheat, clown, disgrace leading us to disaster,” read one hand-painted sign. Another referred to him as a “bawbag,” which, it was explained, is a Scottish word describing in a derogatory way a certain male anatomic part.

It is also clear that Britain’s Brexit controversy and America’s political upheaval result from how Johnson and Trump expertly inflame provocative issues such as unease with immigration, as well as resentment from those finding themselves sinking lower on the economic ladder.

After Parliament’s vote Saturday, the protestors’ ecstasy dissolved Sunday into the continuing drumbeat of uncertainty. Johnson still threatens to take the United Kingdom out of the united Europe, with or without the approval of Parliament and with or without an agreement with the EU. (Parliament will vote later on a Withdrawal Agreement Bill published on October 21.) The courts may have to decide whether Johnson has yet again violated the will of Commons and what, if any consequences will ensue.

The uncertainty is similar yet different to what is occurring in America. President Trump may face impeachment at the hands of the Democratic-controlled House of Representatives. He may be defeated in the 2020 election. But he also may contest that vote as fraudulent. He has hinted at refusing to leave office once his term ends – then said he was kidding. Few are amused.

But if Saturday’s protests here indicated anything, it is that Boris Johnson has less of an inclination to defy institutional convention than does Donald Trump. Even if no second Brexit referendum is taken, as the protestors demanded, there will be an orderly process: a court decision, subsequent general election and perhaps a transfer of power to Labour. Or Brexit. In Britain, they still have faith in the worthiness of centuries of constitutional convention and tradition.

Top photo by Ira Lacher of the October 19 protest in London published with permission.