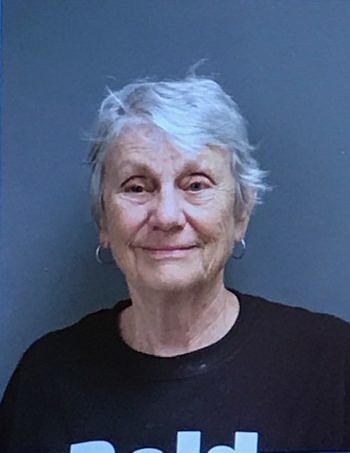 Guilty or not guilty? You decide

Miriam Kashia of North Liberty was one of five people arrested in June 2019 while attempting to enter a West Des Moines venue where President Donald Trump was headlining a fundraiser for the Republican Party of Iowa. The activists were seeking to call out the president’s climate denial to the hundreds of people in attendance. -promoted by Laura Belin

On November 12, I was tried for a simple misdemeanor trespass, along with four others. Our “crime” was for entering a privately owned parking lot while protesting for climate action at a Trump fundraiser in West Des Moines and refusing to leave. We pled “not guilty” based on a clause in Iowa Code that says in essence: if you are justified in trespassing, it is not illegal.

At this writing, the judge has not announced the verdict from the bench trial. I was not allowed to read the statement for my defense that I had prepared for the trial. I am sharing parts of it with the public here, so you can decide: guilty or not guilty?

I am a native Iowan, a retired psychotherapist, who has chosen to commit my remaining time, energy, knowledge, skills, and resources to combating the rapidly emerging climate apocalypse. I hold a lifelong love, awareness and concern about the preciousness and fragility of our Earth. In 2014 I walked for eight months–3,000 miles from Los Angeles to Washington, DC–with the Great March for Climate Action. Then, as now, my goal was to raise public awareness about the looming climate disaster.

Why would I spend my “golden years” enduring the many hardships required of dedicated activists – including costs to my personal time, energy, limited resources, and comfort? Why would I risk arrest at age 76 when I could be living a comfortable retirement?

Because everything I love is at stake. Everything!

And my government is making it worse.

Our government, which is charged with protection and wellbeing of its citizens, is instead protecting and benefiting the fossil fuel corporations. Our two legislative bodies are gridlocked. The executive branch denies climate science, refuses to work on solutions with the nations of the world, and, according to the New York Times, our president has unilaterally voided over 80 environmental protections. We need the judiciary, the third pillar of our government, to dig deeply and act boldly and in accordance with the original intent of our constitution: to uphold the people’s right to protest non-violently with precedent-setting decisions to help avert this crisis before it is too late.

Science tells us if we move immediately and comprehensively, with the knowledge and technology that is now available, we may be able to avert the worst of this calamity, but we only have about a decade to do it. I will be 86 years old by then, if I am still around, and I have some very serious questions to pose:

This is from 11,000 scientists from 153 nations in a statement recently published in the journal BioScience.

We declare clearly and unequivocally that planet Earth is facing a climate emergency. […]

The climate crisis has arrived and is accelerating faster than most scientists expected. It is more severe than anticipated, threatening natural ecosystems and the fate of humanity.

So, given these realities, I reflect back to the question, “Why would I risk arrest?”

Because the historical record of social justice and environmental progress in the United States tells us that the great shifts in public awareness and opinion have happened because people took to the streets and were willing to risk arrest to fight injustice.

In a joint declaration, climate scientists, physicists, biologists, engineers and others from at least 20 countries broke with the caution traditionally associated with academia to side with peaceful protesters courting arrest from Amsterdam to Melbourne. […]

“We believe that the continued governmental inaction over the climate and ecological crisis now justifies peaceful and non-violent protest and direct action, even if this goes beyond the bounds of the current law,” said Emily Grossman, a science broadcaster with a PhD in molecular biology. She read the declaration on behalf of the group.

“We therefore support those who are rising up peacefully against governments around the world that are failing to act proportionately to the scale of the crisis,” she said. […]

“The urgency of the crisis is now so great that many scientists feel, as humans, that we now have a moral duty to take radical action,” Grossman told Reuters.

Life on our planet is imperiled. We have got to act – and quickly. How could I not be justified in peacefully risking arrest to try to stop this from happening?

I vehemently maintain that we were totally justified, under Iowa law, to bring our message to that gathering.

Guilty or not guilty? You decide – when you vote.

UPDATE: Judge David Erickson pronounced all five defendants guilty on November 18. They will be fined but will not receive any prison sentence. Miriam Kashia sent this announcement to her supporters.

And the verdict is:

GUILTY!
The judge didn’t understand our use of the “Justification” defense even though it’s written in the Iowa code.

No jail time. Don’t know yet what my fine will be. I do know that every setback is a step toward victory.

THANKS EVERYONE FOR THE WONDERFUL SUPPORT !!

Innocent yet found guilty – for peacefully fighting for a livable future.

Onward!
Greta: “Never give up!”

Top image: Mug shot of Miriam Kashia following her June 2019 arrest provided by the author and published with permission, along with the two photographs enclosed below. 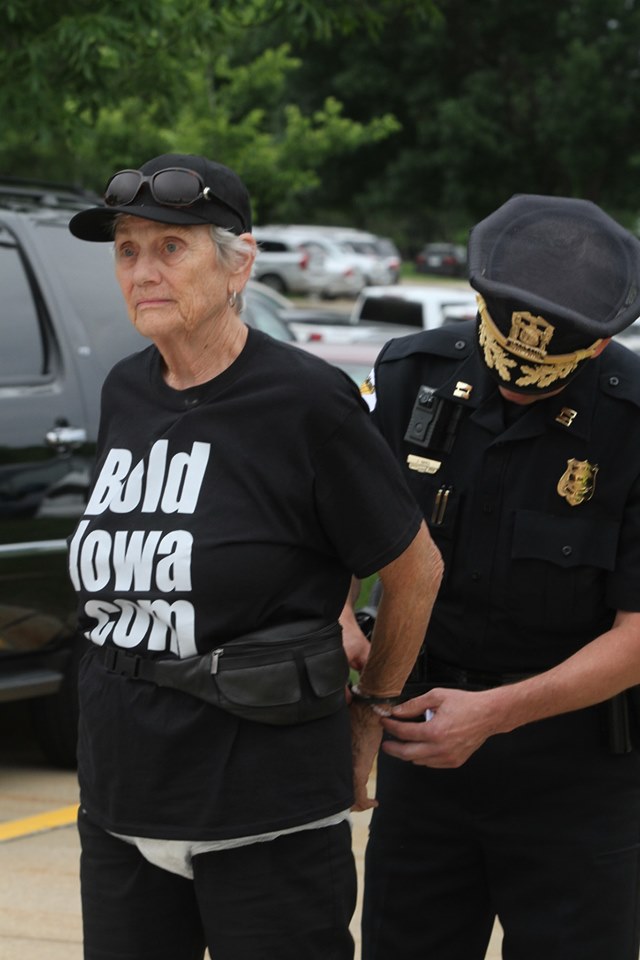 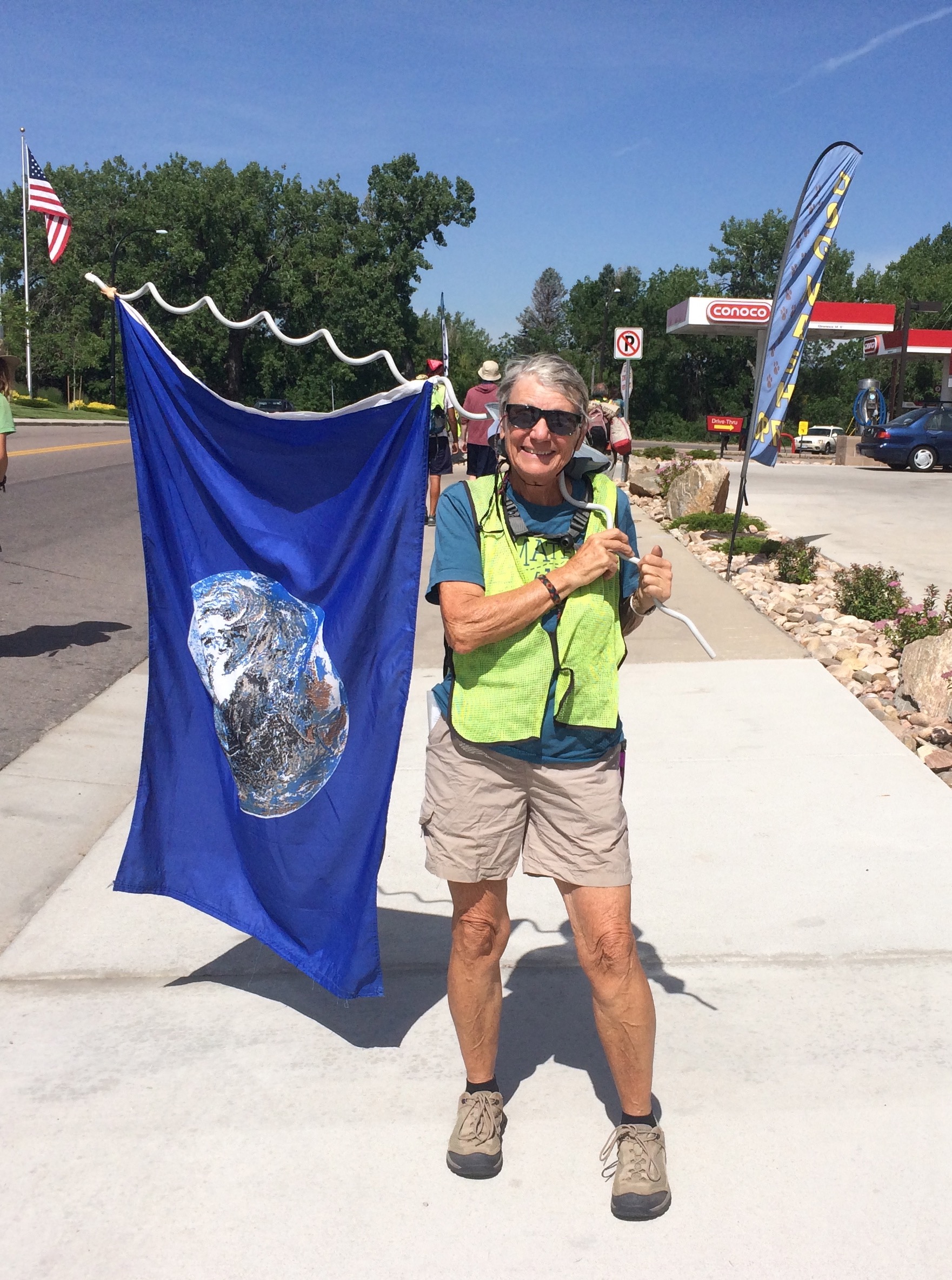 Photo of Miriam Kashia taken in Littleton, Colorado in June 2014 during the Great March for Climate Action