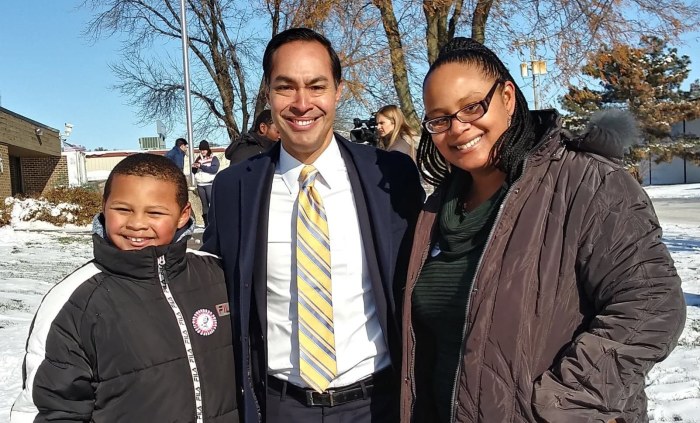 Julian Castro stands up to injustice and discrimination

Right now, in this country and in our home state of Iowa, we have a crisis. Hate crimes are on the rise, we have concentration camps on our southern border and Americans are strapped down by their student loan debt. We need strength to overcome this, we need courage to do what is right, and most importantly, we need a leader who will fight for every American.

Secretary Julián Castro is that leader. He has a plan to make the United States of America a home for all its citizens and put us back on a path of moral clarity. He is the strong candidate we need, a candidate who will stand up for what is right and end the terrible discrimination against immigrants and people of color in this country.

August 12, 2017 was a day that changed my life. I stood on the front lines with other activists and came face-to-face with hundreds of white supremacists in Charlottesville, Virginia. I did not experience that there were good people on both sides but that it came down to two things: love vs. hate.

Experiencing that kind of evil, hatred and violence only fueled my desire to make sure that my son's generation and every generation thereafter never had to grow up in this kind of America. Julian Castro upholds that belief in me.

Last December, I went to the border camp near Tijuana and witnessed firsthand the atrocities this country is committing against our immigrant brothers and sisters. I joined hundreds of other activists and religious leaders to peacefully protest the border crisis, stand up against ICE and say no to the separation of children from their families. When they couldn’t push us back or throw us to the ground, they arrested us and took us into custody.

There are incredible people sitting at the border, people who are fleeing violence and extreme poverty and coming to this country just to provide their families with a better life. The treatment of these migrants is immoral and unjust, and it must come to an end.

We need to stand together against this hate and fight for a better future for everyone. We can’t stand idle while these human rights abuses continue, and we cannot allow ourselves to be silenced. Last Tuesday, I was with Secretary Julian Castro and watched as he escorted an immigrant to his ICE check-in and intervened to make sure his tracking device was removed. This is the kind of direct action we need from our leaders. Direct action that will make a positive difference and change people's lives for the better.

I trust in Julián for the Future, and I believe we can make the United States “For the People” again. This is a vision I am fighting for, because I know what’s at risk. Will you join me?

Top photo of Bonnie Louise Brown with her son and Julian Castro provided by the author and published with permission. The picture was taken on November 12 in Cedar Rapids, when they went with Castro to the local ICE detention center to escort an asylum seeker.