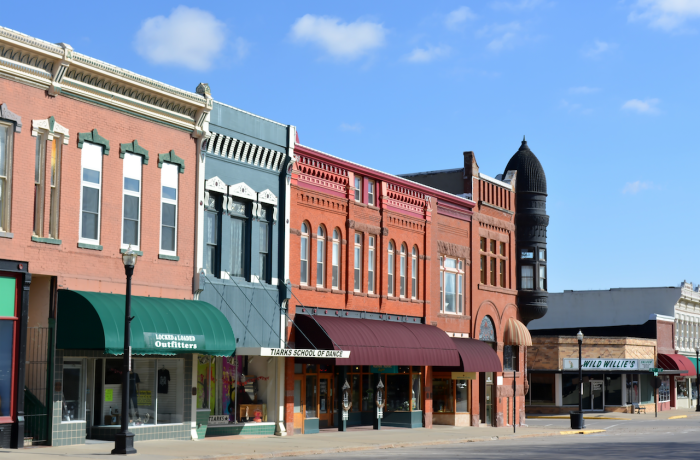 When I was a kid, my mom always warned, “Keep a screen door between you and the Fuller Brush Man.” Back in the day, Fuller Brush salesmen were mobile carnival barkers. They would literally get a foot in the door and then grow roots on the couch until Mom gave up and bought something.

They were fast talkers.

They weren’t from around here.

I am afraid that too many candidates now treat rural America like the Fuller Brush man of old. They barnstorm a small community without ever stopping to hear what makes the heart of rural America beat.

It seems they just want to close a sale and quickly move to a town with more votes and more stoplights. By small community I include tiny towns barely on the map to county seat towns, usually the largest community in the county.

Democrats need to learn from the autopsies of 2016 and 2018 so the party won’t replicate the same errors heading into next year. I understand this may feel like armchair quarterbacking, and people who bled for Democratic wins in the past elections will be defensive, but a clear picture of how the party lost will help it win in 2020.

The great news is some Democratic leaders have learned from the past. For example, J.D. Scholten, who came within 3 percent of knocking off Steve King in the fourth Congressional district last year, has begun his 2020 campaign by visiting towns without street signs. He is holding listening sessions in fire stations and VFW halls.

Another example is State Representative Chris Hall of Sioux City. He recently held meetings in almost every tiny Woodbury County town. I know there are other bright spots from across the state.

I don’t believe, however, that this approach is some magic bullet so rural Iowans will flock to the Democrats if the message or the messenger changes. That’s not realistic.

What may be possible is to win a bigger piece of market share in rural Iowa by listening to voters and tailoring the message consistent with Democratic values. How is that done?

First, the rural message should be clear and simple. It should rest on the four pillars that sustain small towns: access to affordable, quality health care; world-class public education; freedom to farm; and a thriving small business economy. If any one of the pillars falls, the others may tumble, and so it’s critical that any state or federal candidate needs to address all four. There are certainly other issues, but those four should build a sturdy platform in rural America.

Democrats failed on this front in 2016, because consultants told them to run away from the Affordable Care Act (ACA). In 2018, Democratic candidates won because they embraced the ACA and began to talk about universal health care for all, while shining a light on the fact that Republicans had no plan whatsoever.

Health care appeals to all voters living everywhere, but in rural Iowa it is especially critical. If a person lives in a “medical desert” and suffers a serious injury or has a critical illness, being minutes versus hours from medical care is the difference between life and death.

During the 2018 campaign for governor, Democratic candidate Fred Hubbell made the failed Medicaid privatization a focal point of ihs campaign. He ran thousands of television and radio ads talking about the huge problems. He focused most on some of the most vulnerable, disabled, people who would suffer because of a private company’s desire for profit over patients.

The ads might have been well designed, but they missed one angle: the impact on rural hospitals. Rural hospitals have significant numbers of patients covered by Medicaid. They've been crushed because of late or denied payments from the for-profit companies now managing care. A rural voter might not know a person on Medicaid, but they did know what it meant to them if the nearest rural hospital or clinic was shuttered.

While Hubbell was running the Medicaid privatization attacks, Governor Kim Reynolds was running ads about being a small-town girl working at Hy-Vee to make her family budget, which was not a very veiled attack on Hubbell the rich guy from the big city.

The tv ad targeted toward rural Iowa should have been a shot of a closed hospital or clinic, a voice over that indicated why it was closed and a message about what Fred Hubbell would do to get medical care back.

Every Democratic candidate should make public schools the center of rural economic development. They should talk about the need for funding to save rural schools. Without a public school, small businesses die, and the town has to be placed on life support.

Let me be clear. I am not talking about maintaining a mediocre school district just so people can root for a football or basketball teams on Friday night. I’m talking about a quality system that serves the children of the community well.

I grew up in a town of 800 people. The one thing you could get both Democrats and Republicans fired up about is when someone tried to consolidate the beloved school district. Quite a few years later it happened, because chronic under-funding choked the life out of that small school. But it didn’t happen when first proposed, because everyone in town agreed we were better off with our own school.

This should have been a winning issue in 2016 for Democrats since the governor and the Republicans in the legislature refused to fund public schools, and by 2018 had robbed educators of their voice in collective bargaining. It would be a winning message again in 2020.

It is ironic that the Republican Party, including our two United States senators and governor, call any progressive idea they don’t like “socialism,” yet they defend Donald Trump’s tariffs and the need for a special farm subsidy. Most farmers want to thrive without a government handout. It goes against their independent values to rely on government, and this subsidy in no way makes up for the lack of free trade.

In rural Iowa, Democrats need to stop talking about tariffs and call the trade policy what it is. Tariffs are taxes on both production and purchase so both the consumer and the producer are hurt. In 2020, the tariffs should be branded as the “Trump Tax” in every Democratic stump speech.

Businesses in small towns depend on customer loyalty. Not long ago, a Dollar Store wanted to come into that little town I grew up in. It would have provided another place to shop, but the fear was it would run the locally-owned grocer out of business. The town eventually said thanks, but no thanks.

If I were a candidate and wanted rural votes, I’d be a frequent visitor to the local grocery store, the bank, the tavern and the post office. Meet the people and listen and share some ideas. I’d propose tax incentives for new and existing small business rather than give a ways to Apple and Amazon.

The Fuller Brush man is long gone, swallowed up by online shopping and no one to answer the door during the work day. Democratic candidates can’t afford to also fade away because they refuse to be part of the fight to save rural America.