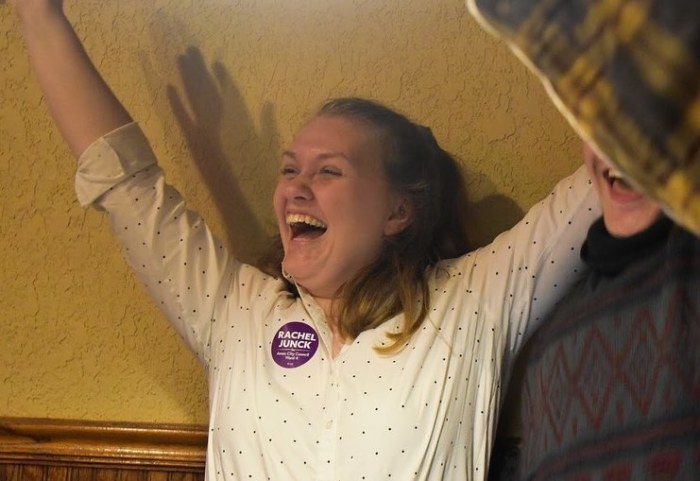 Interview: Rachel Junck on her winning strategy in Ames

Rachel Junck became the second Iowa State University student elected to the Ames City Council this week, winning the runoff election in Ward 4 by 723 votes (55.1 percent) to 589 votes (44.9 percent) according to unofficial results.

Not only did Junck beat a two-term incumbent with strong ties in the business community, her supporters helped push total turnout on December 3 (1,313 votes) higher than the 1,220 who cast ballots in the ward on November 5. Ask anyone who has worked on local campaigns: that almost never happens.

How did she do it? Junck made time for a telephone interview with Bleeding Heartland on December 5.

Q: Students aren't known for voting in high numbers, especially in local elections. How did Junck approach that problem?

"I think the idea that students don't vote comes from the fact that students often times aren't reached out to by people running for office." From the beginning of her campaign, Junck tried to break that cycle by talking to students "about why local government is important in their lives," making sure they were registered to vote, and listening to their concerns. She observed, "they are half the population of Ames, and it's important to represent their perspectives on the council as well."

The strategy depended on reaching students "where they're at": tabling on campus, speaking to different student organizations, having active social media pages.

Junck nearly won the city council seat outright on November 5, falling just seven votes short of the 50 percent she needed. For that reason, "we really hit it hard immediately the day after the election, starting to knock doors again" and let students know that there would be a runoff election.

In those conversations, they emphasized that "every vote really counted," and "I think that's a message that resonated with a lot of young people that might not have known how important it was to vote before."

Q: In persuading ISU students that local government matters in their lives, what issues did Junck bring up?

"I would definitely say housing is a huge one for students, especially landlord/tenant relations," Junck said. Making those better is a primary goal for her on the council.

In addition, "our streets, our parks, everything that's a part of Ames is a part of their lives as well." Students realized that they are half the population of the city, mostly living in Ward 4, but they didn't have a voice on the council.

Q: In reaching students, did Junck find that face-to-face interactions worked best, or were text messages, phone calls, and postcards just as useful?

Face-to-face interactions were the most helpful, Junck confirmed. She noted that "we spent the majority of our funding" on printed materials for canvassers to leave with voters when knocking on doors, as one way to get them interested in the election.

Junck added that "we had a big team of volunteers" to make that happen. "Knocking all of the student apartments in Ward 4 really made a difference."

(Editor's note: Junck raised a little less than $4,000 before the November election, spending more than half on printing. Before the runoff election, her campaign raised more than $3,300; again, the bulk of the expenditures went toward printing. Junck also received an in-kind donation from NextGen Climate Action Committee, valued at $2,966.68 and covering "Canvassing services and related expenses.")

Q: How many volunteers worked on her campaign?

Seven people served on Junck's "core campaign committee," but "countless volunteers" helped too. She estimated about ten people per weekend were out on the doors.

Q: But not during the football game, I hope? (Volunteers in Iowa are often advised to avoid knocking on doors or making phone calls when the University of Iowa or Iowa State football teams are on the field.)

"No, we usually took a break for that."

Q: Had most of Junck's volunteers worked on other campaigns, or was it a first-time experience for most of them?

All kinds of people helped, Junck said. Some were experienced local activists, "but a lot of them had never knocked doors before, and were so excited to get out there and elect a student to the council." Her team tried to match volunteers with tasks they were comfortable with: knocking doors, making phone calls, writing newspaper letters to the editor, or being "dorm captains" helping other students register to vote.

Q: An ISU undergraduate (appointed to a one-year term by the student government) serves on the city council in an ex officio role but has no vote. Does Junck think that student position still has value?

"Oh definitely, I think it's important to always have a fresh student perspective advocating for the issues that they're hearing on campus as well. But I am very excited to be a student with a vote on the council as well and get to work with the ex officio."

Q: Competing against an incumbent, was Junck making a case against things Chris Nelson had done on the council, or was it more about what she wanted to do in city government?

Junck said she ran a "positive, upbeat campaign, talking about my qualifications and my vision for the future."

So I was really making a case for the issues that I cared about, but also wanting to hear from every individual on what they think we could do to improve or change Ames. That's my favorite question to ask on the doors, and it's given me a lot of valuable insight about what the people of the fourth ward really would like to see in the future.

Q: Junck's campaign reached out to voters of all ages, not just students. Speaking to other residents of the ward, what matters came up most often as public concerns?

"A huge issue was affordable housing, and that's an issue that I'd really like to get moving on," Junck said. Many in the community are also concerned about local climate action, which was encouraging because that was a "huge part of my platform."

Q: Does Junck have specific ideas about ordinances or policies to address climate change?

First and foremost, we need to set aside funding for a climate action plan. That way we'll be able to measurably see the level that we're at with our carbon emissions and set goals for reducing it throughout the city.

Something I'd love to see is converting our city fleet of vehicles to biodiesel or electric. That's a huge part of our carbon footprint.

Q: Junck is on track to graduate from ISU with a degree in chemical engineering in the spring of 2021. Has she committed to staying in Ames for the duration of her four-year term on the council?

"Yeah, that's the plan. Ames has always been my home, and I hope it will continue to be after I graduate. I'm excited to be on the council for the next four years."

Q: Was that a concern that came up in Junck's conversations with voters, whether she would stick around?

"Some people asked that question, but a big part of my platform is making Ames a place where more young people want to stay and build their future. Because it is an amazing town to live in, but a lot of our students do go elsewhere, maybe cities with different amenities than Ames has. And I want to make Ames a place where young people would love to build their futures."

Q: Is there anything I didn't ask that is important for people to know if they are trying to build a strong turnout operation for a local campaign?

"I think our operation was great because it didn't just stick to the typical status quo of a local campaign," Junck said. "Instead of going through a list," they reached a broader universe of voters. "We did the work to reach out to everyone" when knocking doors and making phone calls.

"So it's worth it to put in all the work" to contact voters and hear their perspectives.

Q: When she says they didn't just use a list, does Junck mean they were not just reaching out to people who had voted in previous local elections?

"A lot of the student apartments are difficult to have a list for, because they turn over every year. There are new people living there. So we went and knocked all of those."

Q: So were they mainly reaching out to people who had voted in past primary or general elections? Presumably they used some kind of a list, right? Or would volunteers be assigned a street and knock every door?

"We still used some lists, but we had so many volunteers and so many doors that we knocked that we were able to expand them to almost every single door in the ward by the end of the runoff election."

Q: Clearly, given the increase in the turnout from November 5 to December 3, Junck's campaign must have mobilized a lot of people who don't regularly vote in city elections.

"For sure. And that was really cool to see that extra turnout for the runoff election--maybe people that were busy on November 5, or couldn't make it to the polls, saw that it was within seven votes and really took that lesson to heart of how much their individual vote matters."

Q: Talking with older voters, did Junck hear a lot of skepticism about whether an undergraduate has enough experience to serve in local government?

"Definitely." Especially in the summer, when Junck was starting to introduce herself around the community, "a lot of people questioned if I would be able to do it at the same time as my chemical engineering coursework. But I think I've proved throughout the campaign season" that she could juggle those responsibilities.

Receiving the most votes on November 5 helped as well. Being the leader going into the runoff helped people see Junck as "a legitimate candidate and a legitimate city council-elect."