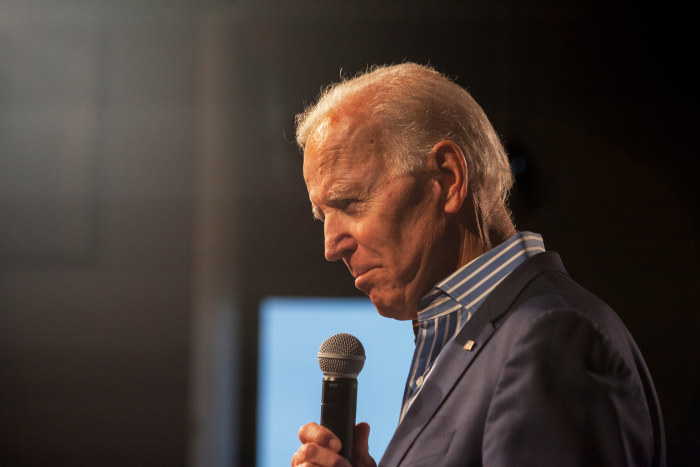 The true cost of incrementalism: defeat

Stacey Walker is a Linn County supervisor who has endorsed Bernie Sanders for president. -promoted by Laura Belin

There’s a popular expression that not paying attention to politics is a privilege. In this time and moment, this is an obvious truth. Only those in the gilded classes are protected from the pervasive social and economic harms that haunt and oppress most Americans. This enormous shield of privilege allows for the bliss that comes with inattentiveness; a sedative that can lull us into ignorance and apathy.

A comparable privilege which I’ve struggled for years to articulate is the one that comes with being able to wholeheartedly support a candidate for president who espouses a politics of incrementalism. An endorsement of this sort of politics suggests an immunity to the social and economic harms I referenced earlier.

The Democrats I know supporting Joe Biden have health insurance. They have good jobs and they don’t have any fear of life or limb when interacting with the police. While this may not seem like much to some, for many Americans this basic sense of security is a Maslovian dream.

More than 30 million Americans are still uninsured or underinsured, and a Harvard Medical School report found that 45,000 Americans die every year as a direct result of not having any health insurance. Forty percent of Americans can’t cover a $400 emergency expense, and the leading cause of death for African Americans aged 15 to 44 is homicide and death by interactions with law enforcement. All of this and we haven’t even began to address the imminent threat of climate change facing our planet.

How can we in good conscience look at the challenges before us and agree that the path forward means taking smaller steps, making minor fixes whenever the opposition allows?

In my view, there is no way a person with a full grasp of these issues could believe that a Band-Aid stops the bleeding from the deep wounds inflicted by systemic harm. America is anemic and she’s hemorrhaging. We need policies that will cure the disease and not just treat the symptoms.

Instead, we have individuals running for the highest office in the land who are trading the demands of poor and working-class people for a failed strategy of political centrism. They call themselves pragmatists because it polls better, but I’ve found nothing pragmatic about making outrageous policy concessions and selling out the most vulnerable Americans in an effort to be liked by the opposition. I’d rather us save lives and have them hate us for it.

The idea that incrementalism is even effective is false. To believe this indicates a poor reading of history and a belief in a political mythology that serves the interests of a small quorum of politicians who exist in very close proximity to the political center.

Nearly every substantial policy accomplishment this country has ever seen was the result of dramatic action. They began as radical ideas and came to fruition by sheer political force, where legislative compromise comes after exhaustive political strife, and not before a candidate has taken office. Rarely does transformative policy – the only kind that will save this country – originate in the political center.

The reason for this is simple. The political center is the best representation of the status quo. If we’ve established that the status quo is not working for most Americans (in many ways it works against them), then we should be able to agree that the status quo needs to be changed. And if we are to change the status quo in a meaningful way – moving beyond triage to a cure – then we need drastic change. This of course means we cannot dismiss the voices coming from the progressive left. We must embrace them. Anything less would be a betrayal of the most vulnerable in our society.

We could expect a centrist president to at best, set the stage for tepid policy offers to be watered down even more by a determined Republican opposition; and at worst, see their lackluster proposals be stalled out completely. In either scenario, the most vulnerable Americans will suffer, and this should be unacceptable to the Democratic Party. This is why the left wing is screaming, and their voices will grow louder as they are met with dismissiveness and derision from the wise and all-knowing members of the Democratic political establishment, who seek first and foremost to protect the institutions that brought them to power.

I am not so far gone into the Gospel of Bernie Sanders for me to freely admit that any Democratic candidate running for president would be a marked improvement from Donald Trump. But I do know full well the harm of low expectations and the dangers of faux progress. Faux progress is what brother Malcolm was getting at when he said that if you stuck a knife in my back nine inches and pulled it out six inches, there's no progress. If you pull it all the way out, that's not progress. Progress is healing the wound that the blow made.

Any Democrat would be a marked improvement, but as former presidential candidate Senator Cory Booker said many times, defeating Trump is the floor. What should come next is a radical transformation of our politics, or at the very least, an attempt. We should seek to heal the wounds and not just jiggle the knife a bit. We owe it to ourselves to try. After enduring four years of chaos and cruelty, we must seek to cure the disease of Donald Trump and his regressive politics.

Now some will patronize the progressive left by claiming that a president who calls for drastic change could never enact such an agenda, forgetting the lessons of history that saw Democratic presidents usher in the New Deal and a Great Society.

But even if this were true, we would never come close to such transformative change with a president who doesn’t even believe it is possible. And that more than anything is a dangerous place for Democrats to be; in suspended belief of their ability to realize a progressive future. If we cannot maintain an ambitious vision for ourselves and our party, we cannot possibly expect to see it for our country.

Joe Biden’s gee-golly incrementalism won’t save us, and neither will Pete Buttigieg’s pop-culture neoliberalism. They are both good men who have served their country admirably, but neither of them are right for this moment. Neither have a politics big enough for this moment; one that is deep enough to address the root causes of America’s illness: inequality, racism, and unfettered capitalism. With Pete admitting his learning curve on issues involving race, and Joe Biden’s history supporting policies that have harmed the African American community, it still is unclear if either candidate understands these issues with the depth and nuance needed to address them in a time where racism itself has become more nuanced and covert.

Last summer, Biden told a group of wealthy donors at a posh hotel in Manhattan that if he were elected, nothing would fundamentally change for them or presumably many Americans. I think we should take the vice president at his word. Much to the dismay of millions of Americans trapped in poverty, or those suffering from inadequate healthcare, or a burning planet, he’s not running to fundamentally change things. His proposition is that he can beat Trump, which admittedly is a damned good one, but it’s not enough.

I understand the appeal of incrementalism. It’s a comforting fairytale, told to the masses to demonstrate the primacy of American democracy. If we don’t need sweeping change often, it’s probably because we got it right. But we haven’t gotten a lot of things right. The mythology of centrism has nearly become softcore propaganda, where proponents believe that any other electoral strategy is either an anomaly and therefore can’t be trusted, or too risky and therefore isn’t worth it. This kind of thinking safeguards the levers of power, and slow-walks the prospects of change.

So far only two leading candidates remaining even seem willing to pull on those levers of power.

Even though mom and dad are fighting right now, both of them are still crucial to determining the future of the progressive movement in America. The failures and successes of Bernie Sanders and Elizabeth Warren at this most critical point in history will become the respective challenges and opportunities for the Squad, the unrivaled future leaders of the Democratic Party.

In this moment of truth, I initially thought it would be prudent to ask my friends in the Democratic Party to respond to a prescient and urgent question posed by the great James Baldwin. He said, “You’ve always told me that it takes time. It has taken my father’s time and my mother’s time. My brother’s and my sister’s. How much time do you want for your progress?”

While I and many others deserve an answer, another question we’ll need to grapple with is how much time do we have left?