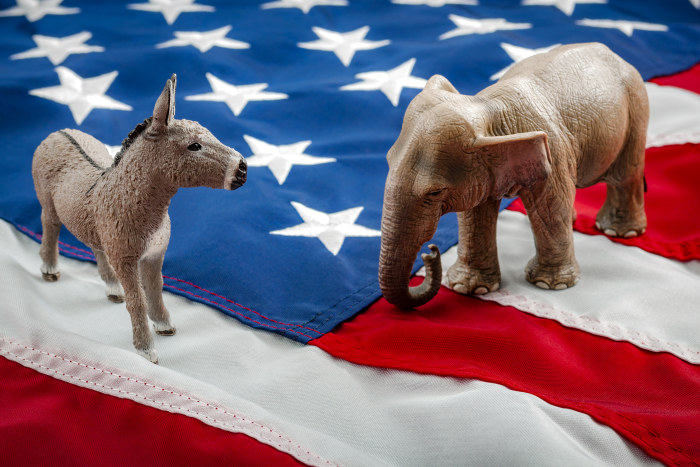 What I learned talking to a Trump supporter for five minutes

TJ Foley grew up in Clive and is a junior at Harvard College studying social studies with a focus on technology policy. -promoted by Laura Belin

On my 18th birthday, I proudly registered to vote as a Democrat. Like my parents and grandparents before me, I believe this nation is better off when we prioritize equal opportunity, economic equality, and collective progress. My earliest political memory is sitting on my Dad’s shoulders at a frigid John Kerry rally in November 2004. I will always carry with me the memory of grandmother’s tears shed the night that Donald Trump won the presidency while losing the popular vote. I deplore this president and regard him as one of the most destructive forces on the planet.

That’s why like scores of other Iowans, I was captivated by last night’s debate at Drake University. This passion drove me to venture down to the campus, hoping to catch a glimpse of the presidential hopefuls poised to unseat our dangerous and unstable chief executive later this year. Much to my surprise, the most impactful part of the evening wasn’t what anything said inside the debate hall, but rather what was happening outside.

As I turned a corner, I came across an assembly of fifteen or so Trump supporters waving flags and holding banners. Overcome by curiosity, I approached one of them and asked him why he had come out on this frigid evening in support of the president, who was holding a rally in over 350 miles away in Milwaukee. Instead of my usual tactic of either arguing or ignoring Trump supporters, I decided to try something new: listen.

I disagreed with almost every word that came out of his mouth. He claimed that taxation was theft, Bernie was a communist, and that a wall along our southern border was “long overdue.”

Although his arguments amounted to little more than a repetition of the president’s normal talking points, I noticed they shrouded an unyielding anxiety. He was anxious about the growing national debt, even though Trump added $1 trillion to it. He was scared about growing crime and unrest—even though crime is often a product of economic inequality and broken schools. But above all, he was afraid that a broken and corrupt political system would leave him behind like it has too many of his fellow Americans.

As he spoke, I realized that this blue-collar retiree shared the same progressive vision of America that I did, even though his policy prescriptions were diametrically opposed to my own. He was right that corruption riddles our government, that our social support structures were broken, and that we continue to saddle future generations with a volatile and unpredictable economic system defined by ballooning debt and sagging potential.

I was startled to learn that the progressive message that I and my fellow Democrats hold dear would assuage his concerns. But before I could make the case that he would be better served by a progressive president, our conversation was cut short by a Democratic campaign operative yelling at the group that they were all “f*cking idiots.”

Much to my surprise, that caused the group to raucously cheer. They were empowered by the operative’s contempt, finding a sick pleasure in his anger. Just like that, the chance to make the case for a stronger, progressive America evaporated into thin air.

Adversarial interactions like these happen every day across social media platforms and in-person conversations. And each time these encounters come to pass, the chasm in our country grows wider and the president’s support grows. I suddenly realized: our contempt for Trump supporters only makes him stronger.

Vignettes of unity and togetherness are always thrown around in politics. Every candidate claims that they will govern by consensus, promising all of us a break from the politically toxic status quo. And despite their best promises, the rancor and discontent within our country grows. This partisan division is the true enemy of progressivism, as it precludes any meaningful discussion of the systematic forces in our country that choke progress and stack the deck against working people.

I propose a simple solution: spend five minutes talking to a Trump supporter. Approach them in good faith and ask why they support the president. More likely than not, you’ll find their answers are permeated by the same anxieties and fears that our progressive policies are best equipped to solve.

I’m the first to admit it is unlikely that you will succeed in persuading them to support the Democratic nominee in 2020. But by having these conversations, we can wear down the wall of contempt that separates us from our republican friends and replace it with a bridge of compassion that will pay dividends long-term political and personal dividends.

I recognize the difficulty this task poses for all of us who are continually disgusted by the actions of this president. Engaging Trump supporters is especially difficult for those identities that have been the subject of the president’s vitriol, and I fully acknowledge the privilege that is embedded in my position. But allow me to be exceedingly clear: I offer no sympathy to President Trump or those who support him for the purpose of inflaming racial tensions, demeaning women, or subjugating gender minorities. Their corrosive brand of xenophobia does not belong in our party.

At the same time, I firmly believe the majority of the president’s supporters gravitate towards him out of fear of a rapidly changing economic system and a political class that is deaf to their ongoing concerns. If we are to truly claim the mantle of progress and live up to our democratic ideals, we must extend a hand and open an ear to all those who suffer from leaders that continue to let them down and write them off, time after time and decade after decade.

I understand that my position may be unpopular. Many will decry it as naïve or misguided. To these critics, I propose a simple rejoinder. For all the evil of this administration, we as must recognize that the forces that propelled Trump to victory in 2016 will outlive his tenure as Commander-in-Chief.  The choice we must make both as Democrats and as citizens of our democracy is whether to deconstruct the social forces that fuel his support–income inequality, political corruption, and the gutting of rural America–or strengthen them by fomenting further resentment for a future demagogue to exploit.

Truly defeating not only Trump but all he represents demands that we overcome the pervasive notion that democrats view republicans with contempt. If we can make that case, we will defeat the president in 2020, and more importantly usher in a new era in our country worthy of our progressive ideals, one five-minute conversation at a time.