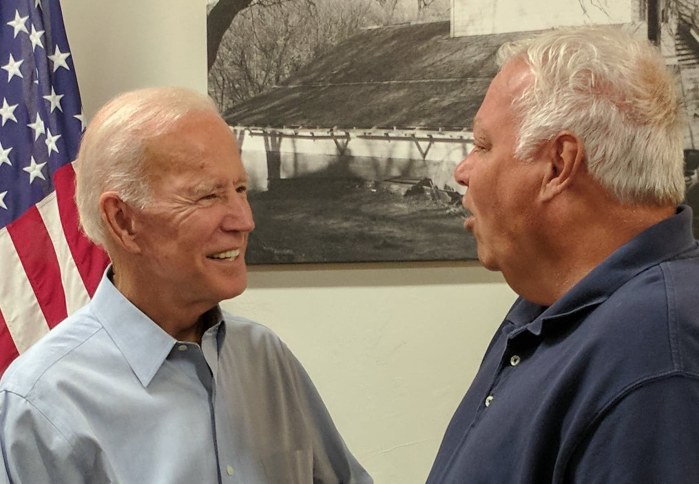 Binge-watching West Wing and why I support Joe Biden

Bruce Lear: The first step to healing is to elect a healer in chief who will return the White House to normal while fixing what this president has destroyed. -promoted by Laura Belin

I know we just finished a full season of Hallmark Christmas movies written to keep the Kleenex industry in business. But for a political nerd, the big-city girl coming home to find Christmas love with the flannel shirted, widowed, veterinarian just doesn’t cut it.

For me, I get emotional when I binge watch a president who never was, in a political world that I wish existed.  That’s why I recently binge-watched all seven seasons of the West Wing.

Without getting into the West Wing weeds, let me briefly refresh your memory. The story follows Jed Bartlet as the former governor of New Hampshire, and an intellectual economics professor who becomes President for two terms.

The fictional Bartlet administration is filled with fast-talking, earnest characters who always seem to speed walk while solving critical problems.  But that’s not endearing enough to make it worth watching a 21-year-old political drama.

Yes, its fiction, but creator Aaron Sorkin took great pains to ground the series in reality.  He did that by using an A-list of political consultants that included Lawrence O’Donnell, Dee Dee Meyers, Marlin Fitzwater, and Patrick Caddell just to name a few.

So, what is the appeal?  For me, the show allows me to get lost in a White House that functions normally.  By normal, I don’t mean perfectly.  The characters have their own agendas and there are all kinds of scandals and even a few conspiracies, but the president and his staff are honest, smart, and transparent.

In short, they have press briefings, diplomatic trips, cabinet meetings, campaign events, and meetings with foreign officials without keeping secrets or hurling insults.  They are adults with all adult foibles, but all the characters have a sense of morality and common sense.

That’s what brings a tear to my eye, because of the contrast with our reality.

In real life, many past administrations had messy and embarrassing scandals, but at least I always knew both Republican and Democratic presidents had the best interest of America at heart–even though I may have disagreed with policy.  That ended with the election of Donald Trump.

What we now have is not normal or OK.  Four more years, and we won’t recognize America.

Trump won the election based on a giant con that told Americans, “Those others, (you fill in the blank), are the ones to blame.”  Let me be clear, I am not blaming the victims of his con, I am blaming the Con man in Chief, Donald Trump.

He sold himself as the man who didn’t adhere to “political correctness,” when in reality he is just rude and narcissistic. To be blunt, if he moved in next to me, I’d be in favor of that wall he talks about going up between our houses.

I am, however, contending that the first step to healing is to elect a healer in chief who will return the White House to normal while fixing what this president has destroyed. For me, that candidate is Vice President Joe Biden.

Other candidates could also do this, but I believe Biden offers the best hope of beating Trump, and also over time, erasing the legacy of “Trumpism.” Biden’s policies will move America forward by bringing the country together.

I know many of my friends will disagree, and that’s OK, but few will disagree that we need to return to a normal leader who will treat all people with dignity even when there is disagreement.  I will support and work for whomever the nominee is, but I believe our best opportunity is with Joe Biden, who can win back states the Democrats lost the last time around.

He might not offer a West Wing Presidency, but he will bring stability to the chaos while moving us forward.  For me, I’ll continue to dream a West Wing fantasy, but I’ll settle for a leader with the strength and the integrity of Biden.

Please join me in caucusing for Vice President Joe Biden on February 3.

Bruce Lear lives in Sioux City and recently retired after 38 years of being connected to public schools.  He was a teacher for eleven years and a regional director for the Iowa State Education Association for 27 years. Top photo of Lear with Joe Biden provided by the author and published with permission.