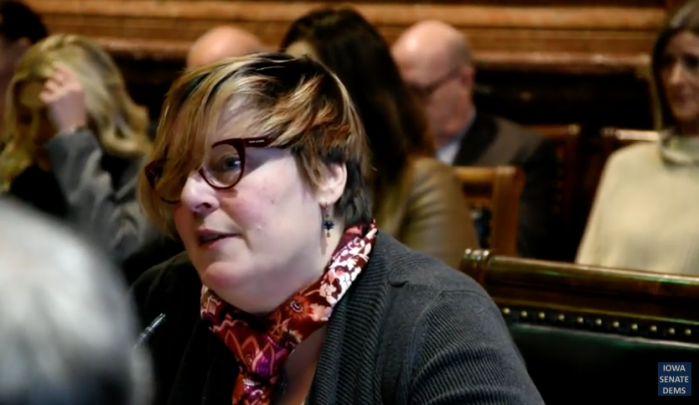 The Iowa Senate Republican majority has proposed amending Iowa’s constitution to state that the document “does not secure or protect a right to abortion or require the funding of abortion.” I believe this is wrong on so many levels. But State Senator Jake Chapman refused to allow me to speak more than two minutes at the subcommittee meeting he chaired, even though I was the only person testifying with a personal story.

I encourage you to watch my testimony, but I hope you will honor my story by also reading the full text of what I wanted to say. I find it disgusting that this issue was pushed out of subcommittee so quickly, and that Chapman clearly has no interest in hearing from Iowans about it. Here is the video:


And my full testimony:

I am here today because of a baby I very much wanted. I had two children and desperately wanted a third. I was 41 years old and feeling like I was running out of time. I was able to get pregnant, but at my 10-week appointment, I was told my baby only measured six weeks. Still convinced this was a healthy pregnancy, I asked if that was a problem…yes, it’s definitely a problem.

I couldn’t believe it, and I waited a week, trying to will my pregnancy healthy, hoping, praying, and soul searching, but after that week, my baby actually measured smaller. I had to make the choice: wait for the remains of that pregnancy to pass on their own at the risk to both my physical and emotional health, or have a medical procedure called a D & C to surgically remove the remains of my pregnancy. I decided to have the D & C, and it was difficult, but it allowed me to move on and be healthy to mother my two kids, as well as it allowed my body to heal and eventually conceive and birth my now four-year-old daughter.

When my bill arrived, it did not say D & C. It said ABORTION, in all capital letters. Despite being a lifelong advocate for Planned Parenthood, I burst into tears, and called the billing office furious that they had labeled this life saving healthcare as ABORTION. But here is what I have come to realize about what happened to me: I did have an ABORTION, and it was just healthcare. It’s not just a Planned Parenthood slogan, abortion is healthcare, and we need to stop criminalizing it and treating it as anything else.

I cannot allow a political party to continue to make women feel horrible about seeking their desperately needed abortion healthcare. It doesn’t matter why a person feels they need to terminate a pregnancy; we should just support and love them through that process. There was no place for a politician in my decision, and at no point did I think I should have to check the Iowa Constitution for permission to control my own health.

I reject the idea that abortion is about ending a life. In my faith tradition, we believe what is written in the Bible: When G-d formed man in Genesis 2:7, G-d breathed into his nostrils the breath of life and it was then man became a living being.” In Job 33:4 it says “the spirit of G-d has made me, and the breath of the Almighty gives me life.” To say that life beings before a baby’s first breath is to infringe upon my religious freedom to believe what is written in the Bible.

I also believe that the proposed amendment to the Constitution will hurt business like mine. Iowa needs to attract workers from outside the state, and having the most restrictive language on personal freedoms will hinder out ability to do that. I am concerned that my children will not want to settle in Iowa if their ability to control their own healthcare is limited by our Constitution.

Like you, I would like to see as few abortions as possible, since surgery is not at all fun and it is expensive. I ask that instead of spending time on what you admit is a long and arduous process of Constitutional amendment, you focus your efforts on things that are scientifically proven to lower abortion rates: improved access to birth control, paid family leave, affordable childcare, and well-funded public schools (yes, I mean more than 2.5 percent). I urge you to vote no, and thank you for hearing my testimony.