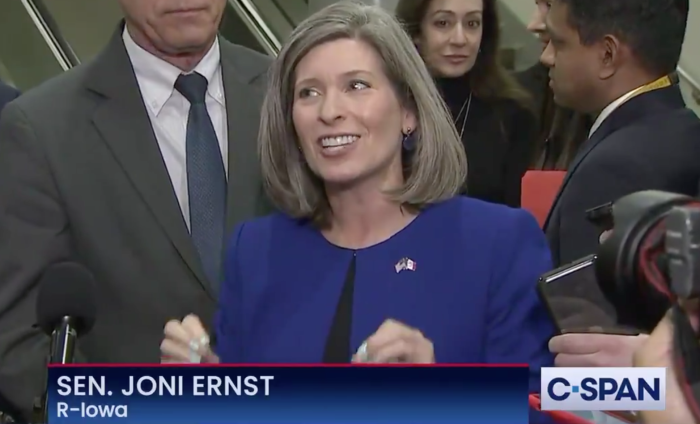 What’s the opposite of statesmanlike?

If there’s a word for that, it applies to Senator Joni Ernst’s latest public remarks about the impeachment trial proceedings.

In her role as Senate Republican Conference vice chair, Ernst has regularly spoken to reporters who are penned in and unable to roam freely around the Capitol seeking comment from senators.

.@SenJohnBarrasso and @SenJoniErnst on the Iowa Caucus taking place next Monday "Will they be supporting VP Biden at this point? Not sure about that"

Ernst started laughing as Barasso told the media, “Everyone was paying close attention for the discussion about the Bidens, but the four people whose eyes were fully wide open were Elizabeth Warren, Bernie Sanders, Michael Bennet, and Amy Klobuchar–all leaning forward, I’ve never seen them all so attentive as when this discussion was on Joe Biden.”

Ernst then broke in to add with a big smile on her face,

Iowa caucuses, folks. Iowa caucuses are this next Monday evening. And I’m really interested to see how this discussion today informs and influences the Iowa caucus voters, those Democratic caucus-goers. Will they be supporting Vice President Biden at this point?

She didn’t blurt that out accidentally. Ernst pushed the same talking point when speaking to reporters off-camera yesterday.

If I were Biden, I’d try to get this clip in front of every caucus-goer. Ernst is deeply disliked among Iowa Democrats, and she just showed that nothing makes Republicans happier than the thought that the impeachment trial might damage Biden politically.

Reporting from a Biden appearance in Iowa City, Katy Tur of NBC News said of the latest Ernst video,

Voters at the Biden event say they saw this. “She gave it away,” one told me. “This is all about hurting Biden in the election.”

The former vice president isn’t drawing crowds as big as his leading rivals in Iowa, and his poll numbers have long been weak for a front-runner. As the many still undecided caucus-goers make up their minds, Biden’s strongest card to play is that Trump doesn’t want to face him in the general election. That’s the central argument of television commercials the Biden campaign and supportive outside groups have been running in Iowa.

Everyone knows the abuses of power that spawned these impeachment proceedings would never have happened if Trump weren’t desperate for a way to bring down Biden. Despite posturing as a big advocate for U.S. military assistance to Ukraine, Ernst is unconcerned that Trump held up Congressionally-approved funding for months, seeking a political favor. She’s doing all she can to change the subject from the president’s misconduct to any narrative that works for Republicans.

It’s a bad look for someone who promised months ago to “evaluate the facts” as a “jurist,” and it may push more Iowans to stand in Biden’s corner next Monday.

P.S.–Biden already used this video to advance his closing argument before the caucuses.

Iowa caucus-goers take note. Joni Ernst just spilled the beans. She and Donald Trump are scared to death I’ll be the nominee. On Feb. 3rd, let’s make their day. https://t.co/FKrqfxDW9L

UPDATE: The Des Moines Register’s Brianne Pfannenstiel noted that Ernst is using this controversy as a fundraising pitch.