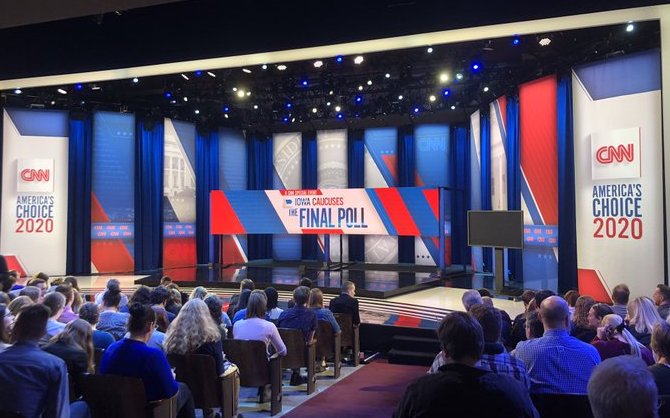 When Mark Blumenthal called the Iowa caucuses “the pollster’s nightmare,” he could not have imagined the disaster that unfolded on February 1, as the Des Moines Register and CNN prepared to unveil the findings of Selzer & Co’s final Iowa poll before the 2020 caucuses.

The newspaper had planned to post its poll coverage online at 8:00 pm, when CNN had set aside a block of time to discuss the results on live television. Instead, a note from the Register’s executive editor Carol Hunter appeared on the website at 8:01 pm:

It appears a candidate’s name was omitted in at least one interview in which the respondent was asked to name their preferred candidate.

While this appears to be isolated to one surveyor, that could not be confirmed with certainty. […]

J. Ann Selzer, whose company conducts the Iowa Poll, said, “There were concerns about what could be an isolated incident. Because of the stellar reputation of the poll, and the wish to always be thought of that way, the heart-wrenching decision was made not to release the poll. The decision was made with the highest integrity in mind.”

According to two sources familiar with the poll, one interviewer at the call center used for the survey enlarged the font size on their monitor, potentially cutting off some names on the randomized list of candidates — including [Pete] Buttigieg’s in the interview in question.

The media outlets couldn’t determine how many interviews may have been affected and whether other candidates may have been left off lists read to respondents in the course of conducting the poll.

Lis Smith, senior communications adviser to Pete Buttigieg, posted on Twitter that the Buttigieg campaign had heard from a respondent and shared those concerns with the Des Moines Register and CNN.

Several pollsters speculated that the problem would be unlikely to affect the ranking of candidates, or was “fixable” if all respondents surveyed by that interviewer were called back to confirm their presidential preference. But with the caucuses happening less than 48 hours after the poll’s scheduled release, that kind of clean-up work was not feasible.

Like most people who follow the caucus campaign closely, I was looking forward to this late snapshot of the Democratic race. I’m devastated for everyone who worked on the poll, including Selzer’s team and the reporters who spent time analyzing numbers that will never be released, writing stories that will never be published.

To those who quickly spread conspiracy theories about the media suppressing good numbers for their favored candidate: shame on you. The Register and CNN had a ton of money and prestige riding on this poll. They would never have scrapped it to avoid giving Bernie Sanders some good press.

Art Cullen of the Storm Lake Times said the incident “raises my estimation of CNN and the Des Moines Register as outfits that strive for accuracy,” adding that “it’s a great moment in journalism.” I doubt anyone involved with this catastrophe will remember it as a great professional moment, but they can be proud to work for a news organization that didn’t gloss over the issue.

The Register could have run the scheduled poll coverage with an editor’s note explaining a minor sampling problem was uncovered, and an internal investigation determined it did not alter the findings in any significant way. They would have gotten plenty of clicks and shares and would not have had to remake the front section of the Sunday paper on short notice.

That would have been a mistake, given how the final Des Moines Register poll sets the agenda for national media covering the caucuses and alters expectations for the candidates in New Hampshire and beyond.

It’s hard to draw a representative sample of Iowa caucus-goers under the best of circumstances. Even with Selzer’s rigorous methods, not every Iowa Poll of the caucus electorate has hit the mark.

One thing’s for sure: every pollster and vendor conducting telephone surveys should study this case and implement safeguards to prevent anything like it from happening again.

Ready for the release of the final @DMRegister/@CNN Iowa Poll before the caucuses!
#iacaucus #weDUpolitics pic.twitter.com/T8dOr78wn6

Where are the freedom fighters? A plea for help from a beleaguered Black man
By swalker06 | 1 Comment