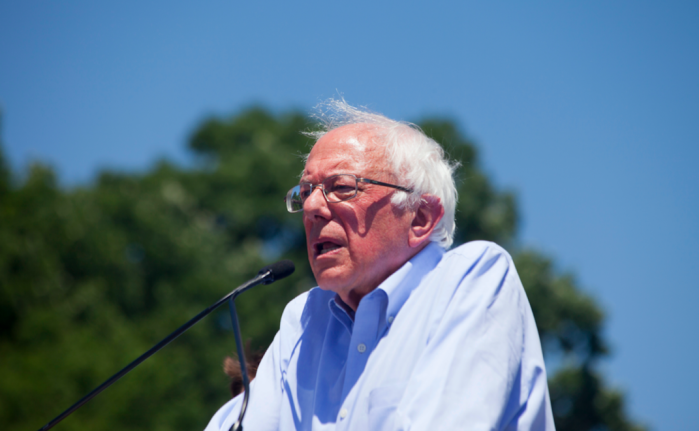 Dan Guild argues that while Bernie Sanders has clearly improved his standing in Iowa, he may be losing the expectations game. -promoted by Laura Belin

Of all the Alice-through-the-looking-glass parts of the American political system, the one I have been completely unable to explain to foreigners is expectations and the Iowa caucuses. It usually goes something like this:

Sane person from another country: “But they got more votes”

Pundit: “But they were expected to win by 10 and they only won by 3, so they lost”

Sane person from another country: “That makes no sense.  So who won?  The person who came in second?”

Pundit person: “No, they got about what they expected.  No, the clear winner is the candidate who finished third.  There is no doubt they won.”

This Catch-22 aspect of primaries is absurd.  But make no mistake: it matters, a lot.

About a month ago I posted a piece here containing a model that predicted the state of the New Hampshire race 48 hours after Iowa.  Since that time, I have had a number of exchanges with Harry Enten of CNN.  He was curious about the expectations part of that model and ran his own, which predicted New Hampshire solely on expectations ten days out as reflected in Iowa polling.  He found for every point you exceed expectations you pick up about .75 points in New Hampshire.

Since then, I revised my own model. I should note his and mine are very predictive (the R squared in his and mine is over .9).

The detail is below, but the key point is that expectations have an enormous effect on who benefits and who does not from Iowa.

Having said this, I want to look at the recent trajectory in Iowa. Bernie Sanders has clearly improved his standing, and I have seen more than a few stories about his “surge.”  But Sanders’ lead is not large, and indeed is nonexistent in some polling.  The danger for Sanders is he may be losing the expectations game. If he fails to win, the lead story may very well be his loss. As I have noted earlier, there is some evidence that candidates who have run twice do not close well in Iowa.

Something else worth noting: expectations affect other campaigns.  Often the leader at this point comes under fire. The best example of this is 2004.  At the race nears its climax, the focus that comes from the expectation of winning may benefit Sanders.  Or it may hurt him.  In any event, coverage seems increasingly focused on Sanders and to a lesser extent Joe Biden.  But neither has much of a lead over Pete Buttieig and Elizabeth Warren.

Take a look at this list and then consider the following table.  In eleven of the last thirteen Iowa caucuses, someone has gained at least 8.5 points in the last ten days.  In short, we can expect a significant move by one candidate, and because this will come late, the expectations game will likely give then an enormous boost both nationally and in New Hampshire.

One feature I think most people do not understand is how the 15 percent threshold tends by itself to create candidate surges.  I will explore the numbers in another post, but candidates under 20 percent often do not match their pre-caucus polling numbers, because they are not viable in many precincts.  As a result, a candidate who had 15 percent of the popular vote might get only 11 percent of the county delegates. Conversely, any candidate over 20 percent will be viable in most precincts, and will gain as supporters from other campaigns move to support them. 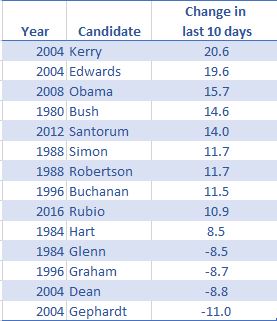 And now to the boring data stuff: the model is based on data from every Democratic election where Iowa was contested since 1980.  The R squared is very high and explains more than 93 percent of the candidate’s post-New Hampshire polling.  Harry Enten’s model included only expectations, and as a result had place more significance on beating your polling ten days out.  My own work includes variables for front-runners.  I think this may more accurately reflect the dynamic when an upset occurs.  Both models perform equally well.

A candidate’s predicted New Hampshire polling after Iowa is calculated by adding the following:

The amount their Iowa results exceeded their polling 10 days before Iowa * .33

Whether they beat a front runner, if so add 6.2

If they are a front runner who loses, subtract -.74, 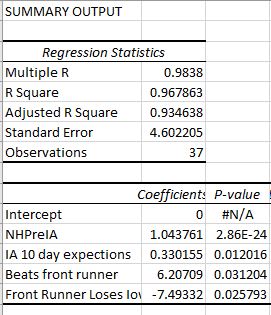