Dan Guild examines what presidential contests since 1980 tell us about the impact of the Iowa caucus results on the New Hampshire primary. -promoted by Laura Belin

Candidates are spending millions of dollars in Iowa right now. But do the Iowa caucuses matter? The state doesn't have many Democratic National Committee delegates and is not that representative of the larger Democratic electorate.

My prediction: if the Iowa caucus results are in line with what current polling suggests, Iowa will matter a lot.

A lot can change during the final month, when many caucus-goers will likely decide, so the race could still be volatile. But this chart is based on the most recent published surveys from Iowa.

That kind of result would completely upend the race for the nomination. Joe Biden's loss and subsequent decline in both New Hampshire and Iowa polling would dominate the headlines. Pete Buttigieg's lead would be another big story, along with the close three-way race between Buttigieg, Warren and Sanders.

At the bottom of this post is a chart that details the interaction between Iowa and New Hampshire since 1980. Some lessons:

2. The initial bounce may not last. George Bush beat Ronald Reagan in the 1980 Iowa caucuses and briefly took the lead in New Hampshire. That held until a dramatic exchange took place prior to a Republican debate, just a few days before the New Hampshire primary.

When that happened, the entire swing from Iowa (over 30 points) unwound in 48 hours. Reagan went on to a decisive win in New Hampshire.

Similarly, Barack Obama took the lead in New Hampshire after he won Iowa in 2008. But that bounce did not last either, and Hillary Clinton came back to win. Something similar happened in the 2008 New Hampshire Republican Primary.

I built this model from my database of New Hampshire and Iowa polling going back to 1980.

This is a summary of how the model is built. R squared is a measure of how well the model predicts the final result. In this case the R squared suggests this model is VERY predictive. Essentially it suggests that really only three things matter in Iowa:

1. Did the front-runner win or lose?

2. If the front-runner lost, who beat them?

3. Did the candidate's results exceed their polling one month before Iowa? This latter result came as a surprise - but the relationship is very powerful.

1. John McCain skipped Iowa in 2008 and did not appear to suffer - something no one else has risked. I wonder if the Biden campaign will ultimately wish they had skipped Iowa.

2. The effect among Republicans is not as pronounced as for Democrats. That is why my model only uses Democratic data.

3. Is Iowa's power declining? There is some evidence from later years that it may be. 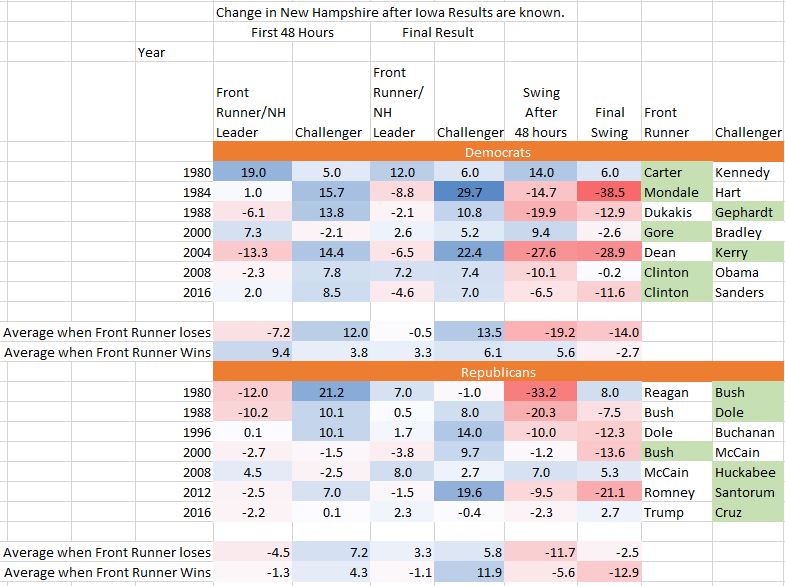