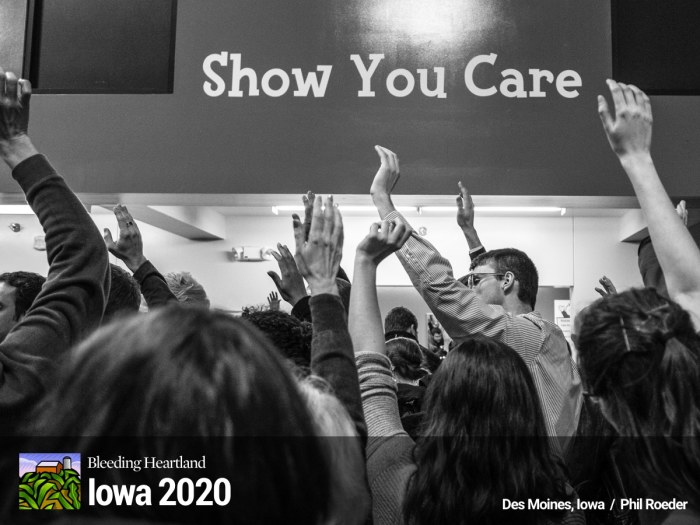 Part 3 in a series on how the Iowa caucuses work

When Iowa Democrats gather to express support for their favorite presidential candidates tonight, the mathematical formula used to determine who gets how many delegates from each precinct will remain the same as it has been for decades.

But other rule changes will limit opportunities for gamesmanship during the realignment process, and reporting three kinds of results from each precinct could downgrade the importance of the final delegate counts.

In precincts with three delegates, the viability threshold will be one-sixth of attendees. In those assigning two delegates, candidates will need 25 percent of caucus-goers present to be viable. There is no threshold in precincts allocated just one delegate. Rather, caucus attendees will break into preference groups just one time, after which the entire group will elect the delegate by a majority vote.

Many precincts will have more delegates to assign than there are viable groups. In that case, larger groups will get one or more additional delegates. Each precinct chair will have a booklet explaining the mathematical formulas used for these scenarios. These examples come from the party's Delegate Selection Plan. 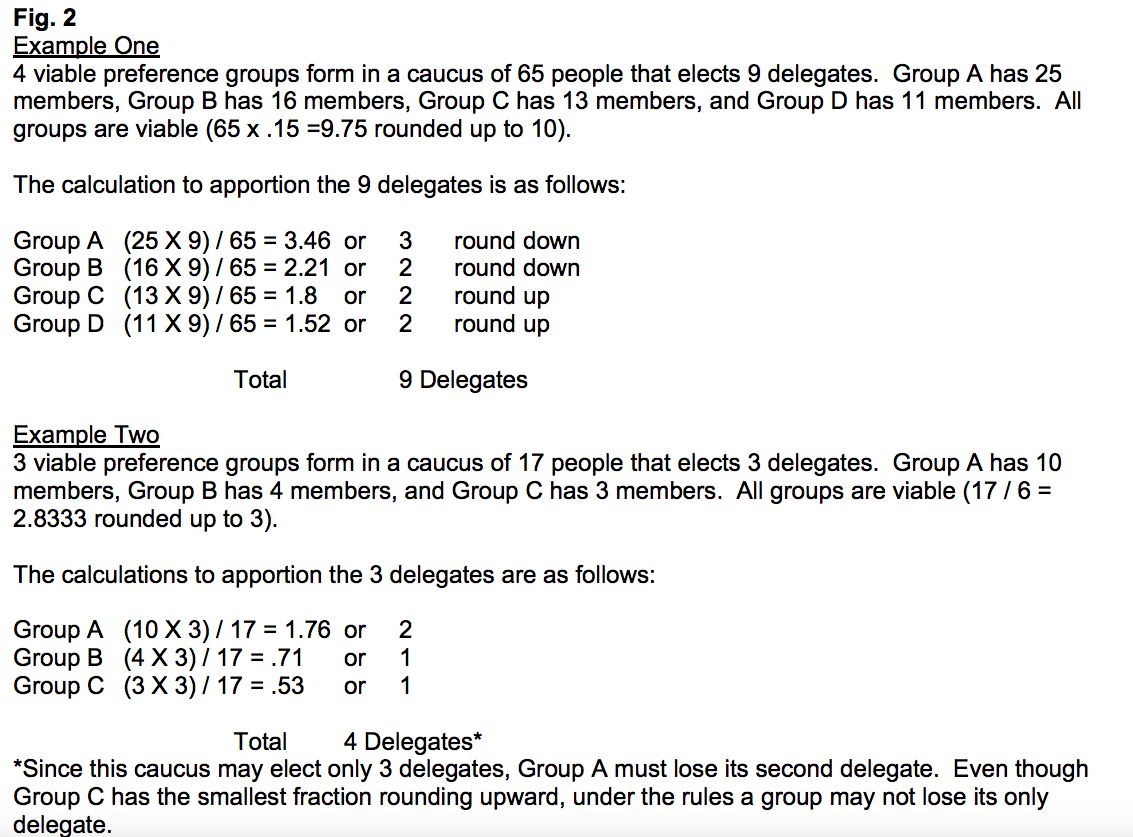 Often two groups of different sizes will receive the same number of delegates, because of rounding up or rounding down. My precinct split its delegates 2-2-2 among three viable candidates in 1988 and 2008, even though the largest group (for Paul Simon and John Edwards, respectively) was substantially bigger than the smallest group (for Bruce Babbitt and Hillary Clinton). Those smaller groups were just large enough to round up to two delegates.

The potential to change a delegate count by moving a few people from one candidate to another during realignment created lots of opportunities for experienced caucus-goers to game the system. I gave some examples in this post from four years ago.

After the first division into preference groups, caucus-goers will count how many people support each candidate and report back to the chair, who will announce the results. Those supporting candidates who did not hit the viability threshold will have a chance to realign. They can either join one of the viable groups or join others backing non-viable candidates to hit 15 percent if possible, either for one of the contenders or for "uncommitted." (As history buffs may recall, "uncommitted" gained the most delegates in the 1976 caucuses; Jimmy Carter "won" by finishing second.)

Under a new rule the Iowa Democratic Party adopted for this cycle, "a viable candidate cannot lose support at any point in the caucus process. A candidate's support can only change if they receive additional supporters in the realignment."

This change should make realignment go a lot more quickly, since most caucus-goers will likely go for a viable candidate in the first alignment. A relatively small number of people in each precinct will be in play. In my precinct in 2016, the small group of Martin O'Malley supporters spent some time trying to persuade those backing Sanders or Hillary Clinton to help them become viable. That kind of scenario won't be possible tonight. People in non-viable groups will either make a second choice or go home.

ONE UNUSUAL SCENARIO COULD BE MORE COMMON THIS YEAR

In rare cases, a precinct caucus may have more viable groups than there are county delegates to assign. As mentioned above, the viability threshold is 15 percent in most precincts. Given the large field of well-funded candidates, four of whom are polling at least in the mid-teens, there could be quite a few precincts where five candidates are viable. It's theoretically possible for six candidates to reach that 15 percent mark. Yet not all precincts elect that many delegates to the county convention.

In that case, there will be a second realignment. Those backing the viable candidate with the smallest group in the room will get to make a third choice: join one of the larger groups or go home.

UPDATE: A version of this scenario played out in Josh Hughes' Warren County precinct, which had two delegates. Warren got one, and Biden and Klobuchar were tied with eleven caucus-goers, exactly the viability threshold. A coin toss gave the second delegate to Biden.

HOW IMPORTANT ARE THE DELEGATE COUNTS?

The Iowa Democratic Party is encouraging news organizations to focus on delegate counts rather than the raw supporter numbers for each candidate, which will be publicly available for the first time this year. The Associated Press has agreed to consider only delegate counts when declaring the Iowa caucus winners.

But knowing how many Iowans showed up for each candidate is more valuable information, to my mind. The old way of reporting made support for non-viable candidates invisible. I'm interested to know how many people preferred each option, even if not all were able to elect a county delegate.

Moreover, it will take many more caucus-goers to elect a state delegate equivalent in urban or college town precincts and counties than in most smaller counties. So looking only at delegates may not provide a representative picture of Iowans' preferences.

I'm excited that we will be able to see supporter numbers after realignment as well as before. That will provide clues on which candidates are better positioned to unite Democrats going forward.

In my mind, everyone's voice should carry equal weight, no matter where they caucus. So if there is a mismatch between tonight's "popular vote" and the delegate counts, I will consider the winner to be the candidate who inspired the largest number of Iowans to stand in their corner.

Top image: Caucus-goers in Des Moines precinct 61 raise their hands to be counted on February 1, 2016. Photo by Phil Roeder, available on Flickr.