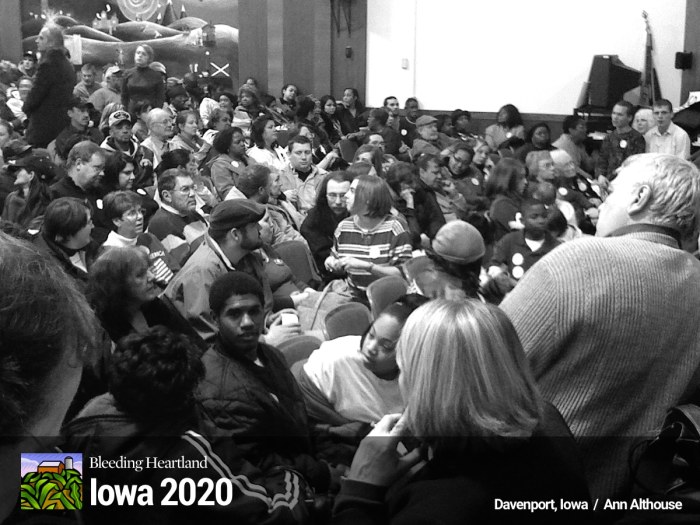 An ending -- and a betrayal

The Iowa caucuses are done.

Frankly, I don’t see how the national Democratic Party has a choice. We took their Lamborghini out on the road Monday night, ignored every single road sign, and ran a beautiful machine headfirst into an ever-expanding sinkhole.

Every cycle, critics, the latest being former Cabinet secretary Julian Castro, railed against Iowa’s first-in-the-nation status because the state is too white and too rural to represent America. Even so, we respond, we bring neighbors together to discuss who’s the best candidate and report the results to the nation. Someone has to go first, and it makes sense that the first state be a centrally located area, with low prices to buy media, and an ability for candidates to make their cases to people so they can persuade others.

Well, that’s gone. Thanks to Monday’s utter clusterbleep of reporting results — they still weren’t available at 9 a.m. Central time Tuesday — the clamor to end the caucuses is inexorable. And, as someone who has helped lead my precinct’s caucus since 2004, I’m forced to agree.

Let me make clear: The volunteers did their best to run the state’s 1,700 or so caucuses. But we did it despite the fact that for years, the Iowa Democratic Party has handed us a machine that was ill-designed and ill-conceived.

Democrats don’t just vote; oh no. To show we’re not frivolous about results, the party insists on viability thresholds and recounts, forcing working parents to stay late with their children.

To show America that in Iowa, high technology isn’t confined to the latest tractors, the party designed iPhone apps to tally and compute results, and automated phone lines to report them. Both crashed Monday, putting the result on hold, like a full jetliner waiting for hours on the tarmac.

Let me make my position clear, as caucus secretary for Des Moines precinct 62: our team and I have nothing to feel ashamed about.

Our team started planning for the 2020 caucuses months ago. We noted the challenges of a new, vast and unfamiliar venue — the Drake Knapp Center, a place for watching Division One college basketball, not for hosting neighbors to discuss presidential politics. We recruited enough volunteers to efficiently register 849 caucus voters, as well as 400 observers and media, without any long lines, and got them into their seats. We established preference group seating areas that made it easy to count heads. We gaveled the caucus to order on time, and made the counts quickly, efficiently and accurately. We counted the votes, tallied them correctly, assigned delegates, and reported the results to the party, and all this between 7 pm and 9 pm. So did many precincts in Polk County.

One precinct 62 resident, Cevriye Horn, summed up the feeling of most participants this way: “Our caucus ran beautifully.” But she also added: “I was so proud of our first-in-the-nation status, and today we’re mourning for its probable loss.”

Yes, we, and dozens of our neighbors, told us we did it right. But the party did us, and hundreds more teams like us, wrong. We learned that the vaunted app malfunctioned badly, apparently because of bad coding and inadequate testing, and that the automated phone line to report the results crashed. The party, which had promised that the results would be available that night, was caught with enough egg on its face to feed breakfast to Paul Bunyan and his blue ox, Babe, for a year.

But while Democrats throughout America will justifiably point to Iowa and demand an end to this farce, Democrats throughout Iowa should demand a reckoning from their party leaders. This is, after all, a party that has shown complete ineptitude at fielding a competitive slate of candidates, turning Iowa from a reliable battleground state into a smug Republican stronghold. And now, betraying the tens of thousands of Iowa Democrats who gave up their time because they believed in the process and were proud of it.

The betrayal isn’t just to our psyches. The caucuses have been credited with bringing millions of dollars to our state and communities — $11 million to Des Moines alone, according to one estimate. We will never get that money back. Candidates, who relied on the results to springboard their campaigns, will never trust us again. But worse, the Iowa Democratic Party has been justifiably humiliated before the world. And it will take a long time for it to recover–if it ever does.