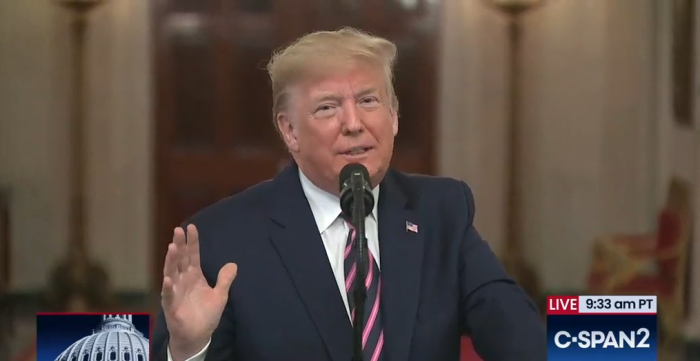 Ira Lacher ponders: What if President Trump had to take the citizenship exam? -promoted by Laura Belin

Donald J. Trump has proved himself so incredibly ignorant about history, geography, civics and almost everything else that some have speculated he wouldn't even be able to pass the test that prospective American citizens have to pass.

What do you think? Some of the real questions (and his very possible answers) are below:

What is the supreme law of the land?
▪ What I say it is.

What does the Constitution do?
▪ Who knows? Nancy Pelosi shredded it. Or maybe I did -- I forget.

The idea of self-government is in the first three words of the Constitution. What are these words?
▪ I am king.

What is one right or freedom from the First Amendment?
▪ I have the right to smear the press as enemies of the people.

What did the Declaration of Independence do?
▪ Freed me from having any regard to decency, dignity and decorum.

What is freedom of religion?
▪ I'm free to make Christians think I know a single word of the Bible.

What is the economic system in the United States?
▪ Get all my money from daddy, squander it often, go bankrupt more times than anyone can count, lie about my wealth, and refuse to release my tax returns.

Name one branch or part of the government.
▪ Mar-a-Lago

What stops one branch of government from becoming too powerful?
▪ I go over to someone who doesn't agree with me, like Susan Collins and Lamar Alexander, and whisper in their ear that I know where their grandchildren go to school.

What are the two parts of the U.S. Congress?
▪ Mitch and McConnell.

The House of Representatives has how many voting members?
▪ Only the Republicans. The others are evil scumbags.

Who does a U.S. Senator represent?
▪ Me.

We elect a President for how many years?
▪ As long as I live.

If the President can no longer serve, who becomes President?
▪ I don't understand the question.

What does the President’s Cabinet do?
▪ Shamelessly fawn over me when the TV cameras are on.

How many justices are on the Supreme Court?
▪ The ones appointed by Republicans.

Under our Constitution, some powers belong to the states. What is one power of the states?
▪ Whatever I say, goes.

What are the two major political parties in the United States?
▪ The fundraiser bashes I give at Mar-a-Lago and Bedminster.

What is one responsibility that is only for United States citizens?
▪ To worship me.

What do we show loyalty to when we say the Pledge of Allegiance?
▪ I'm changing the wording on that one.

Name one state that borders Canada.
▪ Whatever it is, I bet that Mary Louise Kelly can't find it on the map.

Why does the flag have 50 stars?
▪ There should only be one -- you're looking at him.

What is one promise you make when you become a United States citizen?
▪ Regardless of anything I say and do, anyone I insult, how many lies I tell, and no matter how I make you feel completely embarrassed to be an American, you promise to worship me like I was Vladimir Putin. Do I pass?

Top image: Screen shot from the C-SPAN video of President Donald Trump's February 6 statement on his acquittal in the impeachment trial.