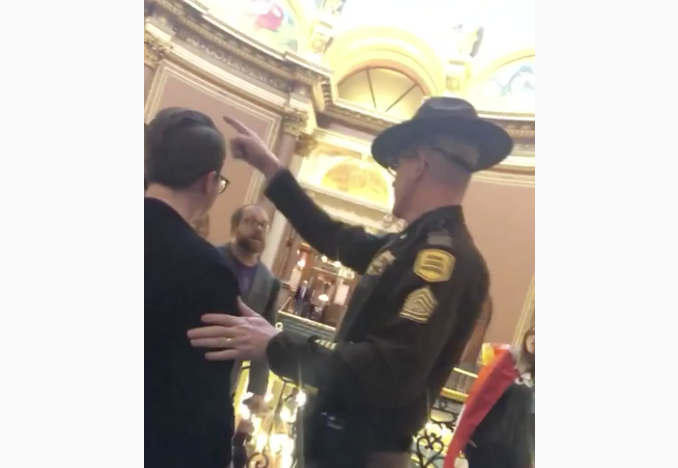 Iowa lawmakers have never enacted a "bathroom ban" targeting transgender people, but some State Patrol officers took it upon themselves to enforce that non-existent policy at the Capitol on March 12.

Security guards forced a large group of students to leave the building because some of the teens had used restrooms conforming to their gender identity.

The LGBTQ advocacy group Iowa Safe Schools had brought some 250 students to the Capitol as part of an annual event to teach young people about lobbying. The group's executive director Nate Monson told Bleeding Heartland his staff had been hearing throughout the day that some of the troopers were telling kids they "couldn't use the restrooms they identified with." He was trying to handle the situation when four state troopers "stormed over" to tell students wearing different kinds of rainbow capes that they they had to leave.

Iowa Safe Schools later provided this video showing part of Monson's exchange with a trooper who appeared to be in charge and identified himself as Sergeant Underwood. Sergeant Tyson Underwood was promoted to the position of Assistant District Commander at the state Capitol building in 2017.

The Iowa Civil Rights Act has prohibited discrimination on the basis of gender identity since 2007. Monson was explaining that the law applies to "public accommodations," but Underwood asserted, "Not in restrooms." He repeatedly instructed the group to "leave now," pausing briefly to tell Monson, "That is not a public accommodation, sir. That is not a gender-neutral restroom. It is a male restroom."

"Go, please," Underwood repeated to the group gathered near the railing. "This is not a request. I'm asking you to leave now." He told one young person, "I am okay with your cause, but you cannot go in the men's restroom as a female." At the end of this clip, he said, "You need to leave now, please. Leave, leave, or else you will be arrested. Leave."

Iowa Safe Schools also provided this video of Underwood speaking to two students. (I edited the file to crop out one of them, who did not want to be identifiable.)

I am not going to allow some underage female, possibly, to get touched or fondled or whatever else that could possibly happen in there.

Your civil rights will be respected, but when it gets to some type of sexual activity, which is possible, I'm not going to allow it.

So don't even go there, do you understand me? I'm not in the mood. I'm not going to put up with that type of argument. Your civil rights will be respected, but not in that instance.

Speaking to Bleeding Heartland later outside the building, a trans male student who did not want his name published said he was told to leave one of the bathrooms on the ground floor. "I legally identify as a male, and they kicked me out." He was wearing a little bit of makeup and was told to wipe it off and use the other bathroom.

Other students said they were told they could use a gender-neutral bathroom on the building's third floor. The confrontation involving Monson happened in that area.

Monson estimated that about 150 students who had come for the lobby day were still at the statehouse when the group was escorted out of the building in the early afternoon. He speculated that the state could face many lawsuits for violating the youths' civil rights.

Several Democratic lawmakers, including Senate Minority Leader Janet Petersen, House Minority Leader Todd Prichard, and State Representatives Jennifer Konfrst and Liz Bennett, came outside to express their support for the students still gathered near the building. Bennett told Bleeding Heartland that when she met some of the students inside, in tears after being told to leave, she initially thought there might have been some miscommunication. She described what happened as a "severe mishandling" by security. Bennett said Petersen has requested an incident report.

I had a lot of questions for the State Patrol, such as:

At approximately 12:30 p.m. today, the Iowa State Patrol and Capitol Security received citizen reports of multiple people occupying one of the male restrooms in the Iowa State Capitol. The concerned parties expressed concern because the occupants included both adult and minor females.

On three separate occasions, Capitol Security requested the adult and minor females discontinue the use of the male restroom and directed them to the gender-neutral restrooms located in the Capitol should they so desire.

The group refused to comply with the requests and were escorted from the Capitol by members of the Iowa State Patrol without incident or arrest.

I had several follow-up questions, such as:

Dinkla replied, "Thank you for your inquiries. The Iowa State Patrol has released their statement. No other information is available at this time."

Someone needs to inform the State Patrol that regardless of any "citizen reports" they might receive from folks who have hangups about trans or gender-nonconforming people, Iowa's civil rights law prohibits discrimination on the basis of gender identity. Capitol Security should focus on potential threats to public safety. It's not their job to tell young people wearing makeup or rainbow capes that they can't use the bathroom.

Courtney Reyes, executive director of the LGBTQ advocacy group One Iowa, later condemned the guards' actions in a written statement.

Iowa law states that Transgender Iowans have the right to access restrooms that match their gender identity. For these troopers to violate these children’s rights is unconscionable. To double down and eject them from the Capitol for asserting their rights under the law is unimaginable. We call on the Iowa State Patrol to issue an apology to these students and commit to training to better inform them of the protections afforded to LGBTQ Iowans so that this never happens again.

Monson is calling for more serious consequences than an apology. He wants the troopers involved to be fired.

Most of the students I spoke with outside didn't want to be quoted by name, but they were upset about how they had been treated. The affront to their dignity overshadowed good news from earlier in the day, when a Senate Judiciary subcommittee comprised of Republicans Zach Nunn and Brad Zaun and Democrat Kevin Kinney advanced a bill that would ban the so-called gay or trans "panic defense" in criminal trials. The Iowa House unanimously approved that bill last week.

I'll update this post as needed with additional comments from state legislators or other officials.

P.S.-- According to a Facebook post by Democratic State Senator Claire Celsi, earlier in the day on March 12, some Republicans told a group of the students with Iowa Safe Schools "that they could not come into the Senate chamber." However, Democratic leader Petersen "intervened and invited the kids in." Groups of young people routinely visit the legislative chambers. I've never heard of efforts to keep them out before.

UPDATE: Bennett posted more about what she witnessed on Facebook. Excerpts:

At one point, Minority Leader Prichard, in a very calm manner, attempted to speak with two troopers because there were still at least two kids missing and still in the building. One teacher said all of her students were missing. No teachers or Iowa State Schools staff were allowed back in to round up remaining students. Leader Prichard attempted to de-escalate as the troopers became agitated. One trooper walked away, and I witnessed the other say, "You need to show some RESPECT." He kept his hand on his taser for the rest of the conversation. I was a little scared, honestly.

If two representatives, including the House minority leader were spoken to this way, I cannot imagine how the kids were spoken to and how scary that must have been. [...]

Leadership has requested an incident report and I will be reviewing this. I will be requesting a meeting with Public Safety and the Governor. This occurrence indicates that law enforcement working in the Capitol have not been trained on civil rights and this is unacceptable. This should NOT have happened today and I will do everything in my power to make sure it never happens again.