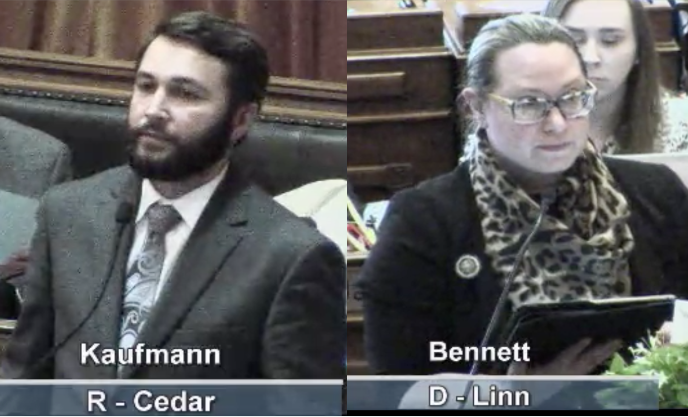 Iowa House members voted 95 to 0 on March 5 to prohibit criminal defendants from claiming any violent crime was justified because of emotions related to discovering the victim's "sex, sexual orientation, or gender identity."

House Judiciary Committee chair Steven Holt introduced the bill later renamed House File 2503. The initial draft applied to those charged with causing the death of another person. An amendment drafted by Republican State Representative Bobby Kaufmann and Democratic State Representative Liz Bennett broadened the scope to cover anyone accused of a violent crime.

The debate on House File 2503 begins at 4:25:20 on this video. Floor manager Kaufmann's opening remarks lasted less than 30 seconds. He explained the bill

prevents a defendant from using a person's sexual orientation or gender identity as a mitigating factor in murder.

Defendants in Iowa and many other states have attempted to mitigate a murder by claiming they were enraged or shocked by a person's sexual orientation or gender identity.

What an unspeakably asinine defense. That concludes my opening comments.

Offering the amendment he and Bennett drafted, Kaufmann noted that defendants in Iowa and elsewhere had used the excuse, sometimes successfully, after brutal assaults or murders. Following brief remarks by Bennett, House members approved the amendment by voice vote.

Bennett's remarks in favor of the amended House File 2503 are worth watching in full:

She recalled six LGBTQ people whose murderers later claimed a version of the gay or trans panic defense: Matthew Shepard, Brandon Teena, Marco McMillian, Gwen Araujo, Angie Zapata, and Islan Nettles. As recently as 2018, Bennett said, James Miller of Texas was acquitted of murder and manslaughter and sentenced to ten years probation on a lesser charge after killing his neighbor, Daniel Spencer.

With that verdict, a Texas jury was willing to absolve a killer of personal responsibility for his actions because his victim was gay. That sends the message that gay people's lives aren't as valuable as others, and that gay people deserve to die.

Bennett then recalled Kedarie Johnson, a gender-fluid teen from Burlington, Iowa. Two men murdered Johnson after discovering the teen had male genitals. Though they were convicted of murder, they attempted to use a panic defense. Bennett asked the chamber for a moment of silence in Kedarie's memory.

In his closing remarks on the bill, Kaufmann called Bennett's comments "spot on."

It's ridiculous we have to do this, but we do. This isn't just a hypothetical. People have been acquitted of murder. They've been given probation. They've been given lesser sentences. All because they successfully used a defense that someone was gay.

The Iowa House sent a message today that violence against the LGBTQ community is unacceptable. This bill will ensure that LGBTQ youth who are victimized will be protected from the cruel defense that their perpetrators harmed them because of who they are. This bill could not have happened without the bipartisan support of Representatives Liz Bennett and Bobby Kaufmann. Representative Kaufmann is a tireless ally to the LGBTQ community.

Since this bill cleared the lower chamber on a Thursday afternoon, and little legislative work happens most Fridays, House File 2503 has not yet been assigned to an Iowa Senate committee.

UPDATE: An Iowa Senate Judiciary subcommittee comprised of Republicans Zach Nunn and Brad Zaun and Democrat Kevin Kinney unanimously advanced this bill on March 12, according to a statement released by the LGBTQ advocacy group One Iowa.

LATER UPDATE: The Senate Judiciary Committee did not take up this bill before the legislature suspended its work due to COVID-19, or when lawmakers returned to Des Moines in June to finish their 2020 work.