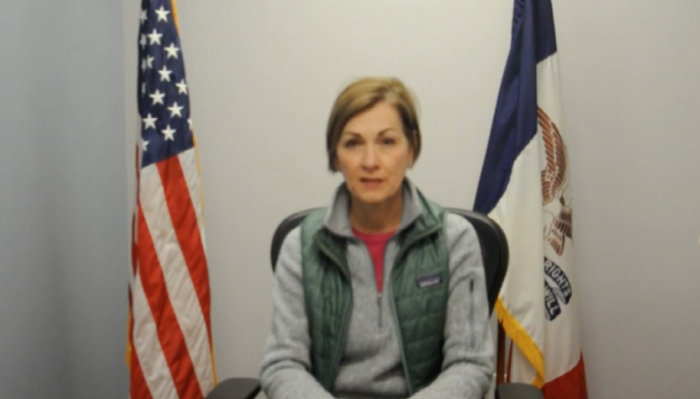 Testing has been primarily restricted to Iowans whose symptoms were severe enough to warrant hospitalization, those who tested negative for influenza and were “in close contact with a person confirmed to be infected with COVID-19 in the 14 days prior to illness onset,” or those who have symptoms and recently traveled to an area with a high rate of infections. A number of Iowans have complained they were unable to be tested, despite showing symptoms suggestive of coronavirus (see here, here, or here).

A Kaiser Family Foundation report estimated that 1,002,750 Iowa adults over age 18 (about 41.2 of Iowans in that age range) are “at higher risk of serious illness” if infected, either because of their age or underlying health conditions.

A review by American Progress, published on March 14, put Iowa among nineteen states that “have taken no action or provided little guidance” on how to slow the spread of the virus.

House and Senate Leadership has made the following decisions:

1. March 16 will be your last day of employment unless otherwise notified by the Chief Clerk, Secretary of the Senate, or your elected official. So please remove any of your personal items by the end of the day.
2. You will receive normal pay through April 21.
3. If you feel ill, that you are a risk to yourself or others, or do not need to be in the Capitol on March 16 – then please do not come to work. All committees and subcommittees are being cancelled.
4. On March 16 there will be health screenings for all persons (questionnaire and temperature reading) entering the Capitol. Therefore, you must enter the Capitol through the south entrance. We recommend that if you come to the Capitol tomorrow, you do so between 8:00 and 11:00 in order to help facilitate the flow of traffic. The building will be open to lobbyists and the public at 11:00.

“All scheduled events, tours, and receptions at the Capitol have been canceled until further notice,” Clark Kauffman reported for Iowa Capital Dispatch.

In a videotaped message released Sunday, Reynolds sounded defensive, saying the IDPH “has been following CDC [Centers for Disease Control] guidance and applying it to the rapidly changing situation.”

As I said just last night [March 14] at our press conference, I’m committed to following evidence-based guidelines to make the right decisions at the right time. And now is that time.

Unfortunately, we know now that we have substantial community spread across our state, which takes us to the next level of response.

Based on this information, I’m recommending that all Iowa schools close for the next four weeks to help mitigate the spread of COVID-19.

The Des Moines Public Schools, the state’s largest school district and the first to extend its spring break because of coronavirus, announced on March 15 that the planned closure will run until April 13, rather than March 30.

The governor’s reluctance to act before community spread was confirmed likely increased the number of Iowans who will fall ill. Tomas Pueyo explained in this Medium post why even “a one-day difference in social distancing measures can end exploding the number of deaths in your community by multiplying more cases and higher fatality rate.” Preliminary evidence from Italy shows that swift action by local authorities “flattened the curve.”

Many Iowa houses of worship canceled scheduled services this past weekend, but many more probably would have done so if Reynolds had urged such steps on Wednesday, Thursday, or Friday.

Des Moines Mayor Frank Cownie declared a state of emergency in Iowa’s largest city on March 15, prohibiting “all gatherings of 250 people or more on public property or right-of-way,” including the St. Patrick’s Day parade. A Des Moines resident who had worried about the planned parade shared with Bleeding Heartland the message received from City Council member Carl Voss on Sunday. Excerpts:

That hasn’t happened yet in Iowa, which cascaded into local decisions without a statewide declaration of a public health emergency.

Instead of waiting for a statewide declaration (preferred/customary), Des Moines chose to follow a cautionary route.

How many other cities missed an opportunity to cancel St. Patrick’s Day events?

Facilities like public libraries and community centers should all be closed for the time being. Owners of private spaces that bring large numbers of people in close proximity should be responsible as well. That includes Iowa casinos, especially since many gamblers are in the age group at elevated risk for complications from COVID-19. Unfortunately, the Prairie Meadows casino in Polk County remains open at this writing. The facility has reduced some of the services provided, but President and CEO Gary Palmer said on March 15,

“We don’t want to completely close down for the heck of it because how are people going to eat and pay their bills? We want to keep it going as long as we can and as safe as we can here, but we are also prepared to close at any moment at any time if that’s what it comes to. Not a problem for us. We are ready for that,” said Palmer.