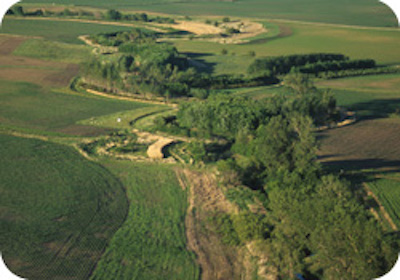 Paul W. Johnson wrote this piece in 2017, when Republicans in the state legislature passed a budget bill that defunded Iowa State University's Leopold Center for Sustainable Agriculture and eliminated it from the Iowa Code. Governor Terry Branstad signed the bill and left in place the sections redirecting funding away from the Leopold Center to the newer, corporate-friendly Nutrient Reduction Center at ISU. But he item-vetoed the section that would have removed all code references to the Leopold Center. Consequently, the center still exists but with no funding for research and education on sustainable agriculture. -promoted by Laura Belin

“Conservation means harmony between men and land. When land does well for its owner and the owner does well by his land: when both end up better by reason of their partnership, we have conservation. When one or the other grows poorer, we do not.” -Aldo Leopold

That is why we established the Leopold Center for Sustainable Agriculture in 1987.

“It is the individual farmer who must weave the greater part of the rug on which America stands. Shall he weave into it only the sober yarns which warm the feet or also some of the colors which warm the eye and the heart.” -Aldo Leopold

“The landscape of any farm is the owner’s portrait of himself.” -Aldo Leopold

“Once you learn to read the land I have no fear of what you will do to it or with it. And I know of many pleasant things it will do to you.” -Aldo Leopold

One hundred years ago our nation recognized the importance of multiple use in our national forests. Since then our forests have been managed for timber, wildlife, recreation, and water management. It was an idea that has worked well. The Leopold Center applied this visionary concept by promoting multi-functional, sustainable agriculture research at Iowa State University.

The state of Iowa and Iowa State University gave the world Norman Borlaug and the green revolution. Look at what it’s accomplished. We recognize our native son every year with the World Food Prize.

Thirty years ago the state of Iowa also launched the other half of a healthy agriculture with the Leopold Center. Don’t let this idea die and cede it to Wisconsin or California. Don’t let the naysayers trick us into thinking that we can’t afford a few million dollars a year to assure the future health of our private lands.

A few years ago, we gave an Egyptian company (now Dutch) more than $100 million dollars in grants and tax breaks to build another nitrogen plant in Iowa. And now we say we can’t afford a couple million dollars a year to maintain our Leopold Center, the world premier center for promoting the health of our agriculture lands.

We need a renewed vision of what Iowa’s future will be – Norman Borlaug and Aldo Leopold. Wow! What a great state we could be. Please, Iowa legislature, governor, and Iowa State University, give our future a chance. Restore full funding to the Leopold Center along with adequate funding to the new Nutrient Reduction Center at ISU. Make Iowa great again. Yes, we can.

Paul W. Johnson of Decorah is a preacher’s kid, former Peace Corps Volunteer, former state legislator, former chief of the U.S. Department of Agriculture’s Soil Conservation Service/Natural Resources Conservation Service, former director of the Iowa Department of Natural Resources, and a retired farmer. He served in the Iowa House when the legislature created the Leopold Center for Sustainable Agriculture in the 1980s.

Top image: Photograph of a riparian buffer taken from the Leopold Center's website page on the Agroecology Research Team.