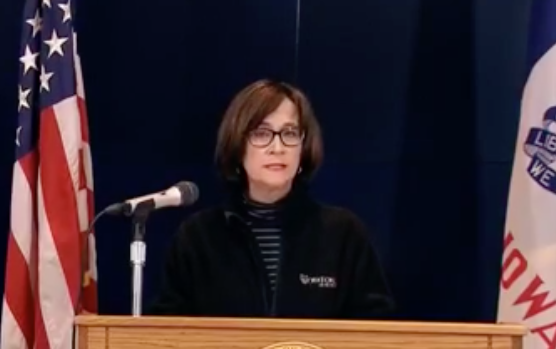 The novel coronavirus (COVID-19) outbreak is causing massive economic disruption as many workplaces close and consumers scale back their normal activities. Economists are predicting a “sharp increase in the unemployment rate nationally.”

The state agency that handles Iowa’s unemployment payments has been receiving as many new claims in a day as they would normally receive “in a busy month.”

We are seeing an unprecedented number of claims. We are going to coordinate with the governor’s office and release those numbers next week, once we’ve been able to catch our breath a little bit. But it’s pretty staggering to see the number of claims that we’re receiving.

Essentially, what we’re receiving on a daily basis is what we would receive in a busy month.

Townsend declined to provide a ballpark figure, saying, “We’d rather release the numbers when we have accurate numbers, and we’re going to coordinate that with the governor’s office for release next week.”

In response to a follow-up question, Governor Kim Reynolds and Townsend both denied Trump administration officials had instructed them not to publicize specific unemployment figures. The New York Times reported on March 19,

The email, which was shared with The New York Times, noted that the reports were monitored closely by financial markets and should therefore remain embargoed. “States should not provide numeric values to the public,” wrote Gay Gilbert, the administrator of the department’s Office of Employment Insurance.

In her prepared remarks, Townsend emphasized that Iowa Workforce Development is “working very hard to lessen the financial impact of a temporary loss of income due to COVID-19-related layoffs.” She assured Iowans who have been laid off, need to self-isolate, or must stop working to care for family members or because of school or day care closures, “You can receive unemployment benefits, provided you meet the other eligibility requirements.”

The agency has waived work search requirements for COVID-19 claims as well as for unemployment claims that predated this crisis, Townsend added. They have also waived work availability requirements for the COVID-19 claims. She said their goal is for Iowans to receive payment within seven to ten days of filing for unemployment benefits. “Fact-finding interviews for those claims have also been waived, although employers will be notified when a claim is made,” according to Townsend.

Iowa Workforce Development has a phone line for those needing assistance (1-866-239-0843), but Townsend warned wait times are long due to “an inordinate amount of calls.”

Iowa Workforce Development field offices are open. People need to schedule an appointment in advance in most cases, but job-seekers “who need proof of ID for an unemployment claim” can show up without an appointment, bringing the necessary documents.

The application form for an Iowa unemployment claim is here. Iowa Workforce Development posted videos in English and in Spanish explaining how to file online.

At the same March 20 news conference, Reynolds said she is “not considering” a shelter-in-place order, like the one California’s governor issued March 19. She repeated advice she has given at all of her recent public appearances, such as: if you’re sick, stay home, wash your hands frequently, and cover your cough.

The state of Iowa has a new website devoted to information about the coronavirus epidemic. At this writing, Iowa has 45 confirmed cases, though many doctors and patients have complained that stringent testing criteria exclude many who reasonably suspect they have COVID-19. Jason Clayworth and Barbara Rodriguez provided examples in this Des Moines Register article on March 18. Excerpts:

Jennifer Killion, an Ames doctor, is concerned that testing criteria used in Iowa are too narrow to properly detect the spread of coronavirus in the community. Proper detection will help identify those who are infected and prevent spread to vulnerable populations, she said.

Doctors in Iowa can order private tests on patients who are ill, but that takes additional steps and results take about five days, she noted. Testing is also constrained by limited supplies and personal protective equipment, Killion said.

“If we mostly only test hospitalized patients, my concern is at that point — because they usually need hospitalization a week into it and since only 10 to 20 percent need hospitalization — you could be looking at 100 cases in the community by the time you diagnose that one patient in the hospital,” Killion said.