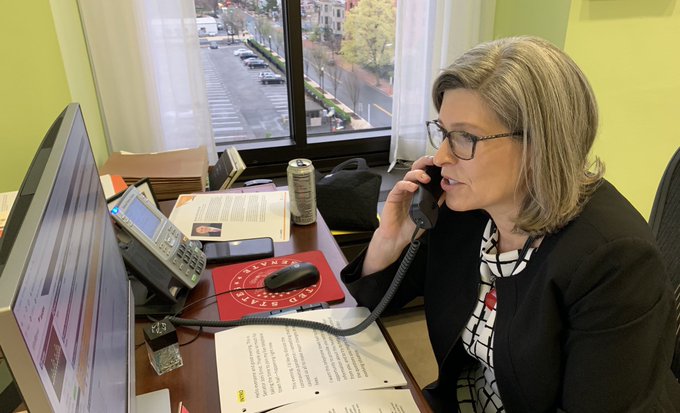 Joni Ernst: Not "prudent" to end social distancing by Easter

U.S. Senator Joni Ernst told constituents this evening it “would not be prudent” to discourage social distancing by Easter and that Americans should follow the advice of medical professionals.

Ernst’s staff organized the March 25 telephone town hall focused on the novel coronavirus (COVID-19) epidemic. The target audience was older Iowans, and many of their questions were directed to the senator’s guests on the call: Dr. Brooks Jackson, dean of the University of Iowa’s Carver College of Medicine, and Brad Anderson, state director for AARP.

An Iowan who listened in provided this recording to Bleeding Heartland.

Around the 36:40 mark, a caller identified only as Bruce referenced President Donald Trump’s comments indicating he’d like to see most of the country “back to work” by Easter, which most Christians will celebrate on April 12. My transcript:

Bruce: My question is, the president yesterday called for a lifting of quarantines and isolation come Easter. On the other hand, I’ve heard professional medical people say that’s not prudent. What is your stand on that? Do you agree with the president, and if not, what are you going to say?

Ernst: Yeah, absolutely. I’ve been asked about that a couple times. And I think that that would not be prudent to lift quarantine and discourage the social distancing, especially if it goes against the advice of those coming from the CDC [Centers for Disease Control] or those that are medical professionals.

So as much, you know, I appreciate the president’s optimism and trying to get our economy back to normal, first and foremost we need to make sure that we’re protecting our population, especially our vulnerable population.

So I don’t know that we can end the social distancing, the, you know, shelter in place that a number of cities have, or states have. I do think that we’re going to have to rely on Dr. [Anthony] Fauci [director of the National Institute of Allergy and Infectious Diseases] and the CDC to determine when it is safe for people to start engaging in more normalized behaviors.

And so I would say, let’s let those medical professionals make that determination, and as soon as we are able, we will get this economy up and going. You know, America is very strong. We will recover as quickly as we can. But we need to make sure that we are safe in doing so.

So we’ll wait, we’ll see what Dr. Fauci’s advice is, and hopefully, you know, sooner rather than later, but let’s make sure we’re being safe about it. I don’t want to rush into anything and then have more people affected after that. So I would say, let’s slow down a little bit, and let’s take care of our population.

Ernst rarely contradicts the president in public and has been a reliable vote for his agenda. She is also very popular among Trump supporters in Iowa. Early polling suggests that Republicans and white evangelicals largely approve of Trump’s handling of the epidemic. Many in those groups think the media have blown the coronavirus threat out of proportion. For weeks, Fox News personalities “played down the danger of the deadly coronavirus,” and some prominent conservatives have suggested it isn’t worth disrupting the economy to slow the spread of COVID-19.

In contrast, Dr. Fauci has called for “aggressive” steps to reduce transmission of the virus. He has even contradicted Trump’s misstatements at some media briefings.

Against that backdrop, it’s commendable for Ernst to stress the importance of listening to medical experts, specifically citing Fauci. We don’t need churches filled on Easter Sunday with worshippers who think social distancing is only for liberals, or that praying in large gatherings is a way to express their pro-Trump identities.

At other times during the March 25 town hall, Ernst and her guests encouraged all listeners–not just those showing symptoms of illness–to avoid leaving home unnecessarily to protect themselves and others from COVID-19.