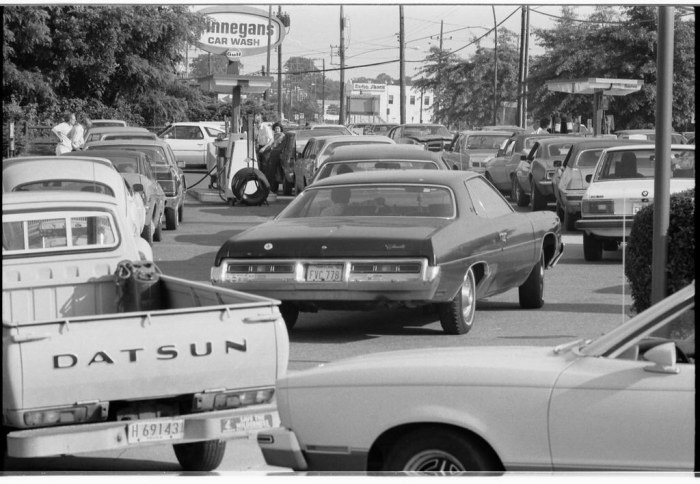 Dan Guild examines opinion polls from 1979 and 1980 for clues on how the COVID-19 crisis could affect President Donald Trump's approval. -promoted by Laura Belin

The White House predicts between 100,000 and 200,000 Americans may die because of novel coronavirus (COVID-19). Ten million people in this country have lost their jobs in two weeks. Ian Bremmer noted that an estimated 3.5 billion people were in lockdown because of the pandemic, which probably makes it the most widely shared experience in human history.

The only parallels to be found are in history books. World War II. The "Spanish Flu." Plagues have changed human history. The Black Death played a role in ending feudalism. Further back in time, a plague changed the course of Western civilization when it took the life of Pericles during the Peloponnesian War.

Perhaps the smartest observation anyone has made lately came from New York Governor Andrew Cuomo, who said getting back to the old normal would be impossible.

In a post published here two years ago, I asked if anything could make Trump popular. In that article, I noted that events have a way of changing political destiny in unpredictable ways. Certainly, the COVID-19 epidemic's timing was unknown (though as with most crises, warning signs existed beforehand). I wrote about the crisis with Iran in 1979 and 1980, noting President Jimmy Carter's brief rise in support.

Since then some others have written good pieces comparing Trump to Carter and the bounce he received during the Iranian hostage crisis; I liked Kyle Kondik's analysis at Sabato's Crystal Ball. But I think those articles miss an important lesson that Carter teaches.

Consider the following passage from a TIME Magazine article in July 1979:

Americans last week began getting an unpleasant taste of what lies ahead. Gasoline lines, which once seemed a temporary California phenomenon, were snaking through the suburbs of Washington and streets of Manhattan, and by last week had spread all up and down the Eastern seaboard. Seven states—Connecticut, Florida, Maryland, New Jersey, New York, Texas and Virginia—and the District of Columbia had to begin odd-even allocation. Independent truckers, who charge that rising fuel prices are depriving them of a livelihood, started a strike that soon led to food shortages, scattered violence and threats of worse to come.

Carter began 1979 with an approval rating of 41 percent in a CBS/New York Times poll and 51 percent according to Gallup. On January 16, the Shah of Iran was overthrown, and the subsequent revolution among other things sharply reduced oil exports from Iran. Gasoline cost $0.63 a gallon at the start of the year. By July 1979, it was $0.91 and in July 1980, it was $1.22. That sharp rise triggered inflation and then a recession. It also created a pervasive sense in the country that things were out of control.

The result: on July 11, 1979 a CBS/NYT poll found Carter with a 26 percent approval rating - only 2 points higher than President Richard Nixon's approval rating when he resigned. Incredibly, in the poll Carter received only 16 percent when matched against Ted Kennedy among Democratic respondents.

Carter's political position in 1979 was unquestionably the weakest of any first-term president since Herbert Hoover. He gave a national address on energy on July 15 of that year. The inaccurately labeled "malaise speech" (he did not use the word) helped briefly; Carter's approval rose from 26 percent to 37 percent. But the bump was short-lived.

More than any other, the oil crisis defined Carter's presidency.

Militants stormed the U.S. Embassy in Iran on November 4, 1979. The USSR invaded Afghanistan in late December of that year. The chart below shows the public reaction. But the bounce Carter received can be misread. Part of the reason it was so large was his approval was so bad before these events. In retrospect, Carter never got much over 50 percent approval. 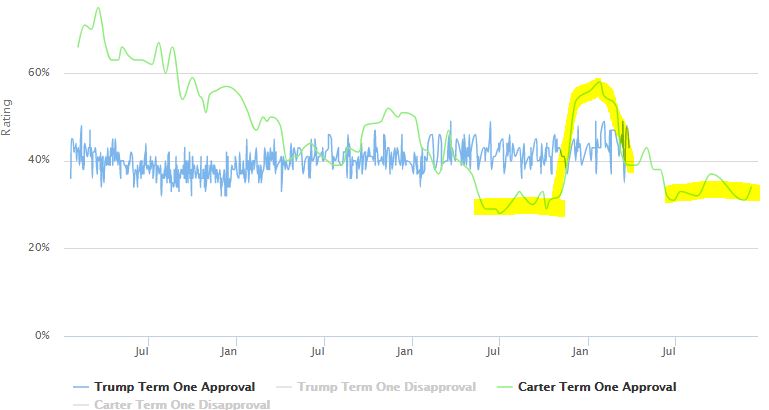 The area in yellow traces Carter's approval from the start of the gas crisis, through the rise resulting from the Iranian hostage crisis and the Soviet invasion of Afghanistan. In the end, Carter's approval just before the 1980 general election was about where it had been in the spring of 1979.

So what lesson does the Carter presidency hold for us? One is that we live in sharply polarized times. Trump is not popular, but his popularity has never reached the depths Carter's did. For that reason, I think comparisons of Carter's bounce with Trump's bounce from COVID-19 are overdone. Polarization limits not only how popular a president can become, but also how unpopular they can become.

But the other lesson is not to judge an event's impact in its immediate aftermath. The gas crisis of 1979 was more than an economic event - it gave rise to a sense that Carter was being overwhelmed by the situation. Once accepted, that impression proved impossible to overcome.

If the public begins to perceive that Trump is overwhelmed by this crisis, his approval numbers may follow the path of Jimmy Carter's in the first six months of 1979.

Top image: Warren K. Leffler's photograph of a line at a gas station, June 25, 1979. Public domain from the U.S. News and World Report Magazine photograph collection, donated to the Library of Congress.