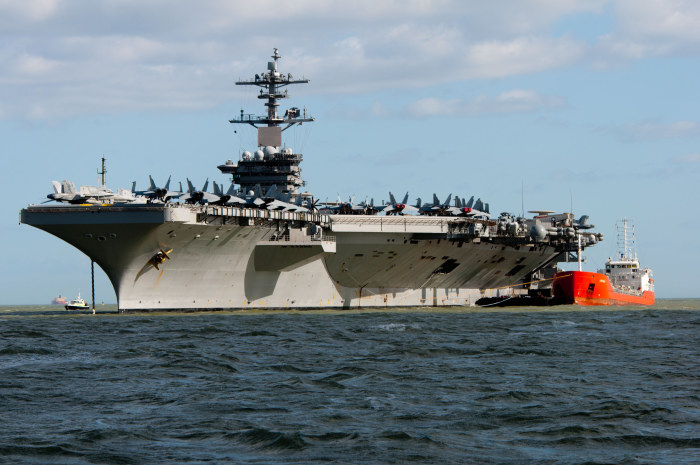 James C. Larew: “Be it remembered as the date and place when the gap between the nation’s leadership and its citizens became too wide to close.” -promoted by Laura Belin

On April 2, 2020, the effective command of Acting Navy Secretary Thomas B. Modly, and the administration for which he had cowardly acted, died.

Only a day earlier, already informed of the dire straits faced by the crew of the novel coronavirus-infested USS Theodore Roosevelt, Modly had defended Captain Brett E. Crozier’s efforts to secure more effective action by a tone-deaf Defense Department, slow-to-move in the rapidly-changing pandemic environment.

In Crozier’s vessel’s tightly-quartered conditions, already, at least 100 of the more-than 4,000 crew members had grown ill.  Without success in securing their evacuation, when working through normal channels to protect his sailors, Captain Crozier had written a four-page letter that was widely-distributed, whether by him, or by others, including into the hands of the press.

After outlining the seriousness of the problem facing his crew, Captain Crozier had pleaded: “This will require a political solution but it is the right thing to do … We are not at war. Sailors do not need to die. If we do not act now, we are failing to properly take care of our most trusted asset – our sailors.”

It made sense that the acting secretary, at first, had seemed to defend Captain Crozier’s efforts to summon the attention of the military’s leadership to a very serious problem.

After all, Modly himself, the product of a Naval Academy education, had been steeped in the Navy’s most cherished customs and traditions, ones that venerated public service, as summarized in its motto: “Non sibi sed patriae!” (“Not self, but country”!)

Until now. Until this moment. In the midst of the most serious pandemic in over a century.

Under this president, who is no Teddy Roosevelt, the words of the Navy’s motto have been reversed in order: “Not country, but self!”

In this administration, speaking truth to power limits the shelf life of any “acting” official.

In this presidency, many of what were once stable, Senate-confirmed, institutionally-buttressed positions have been reduced to pockets of “acting” jobs, assuring the president’s ability to terminate, without political recourse, persons like Modly, who may otherwise, at least on occasion, be inclined to disagree with an administration’s harmful whim or misguided notion.

All persons and officials, whether uniformed or not, except Trump family members, who stand in proximity to this bone-spurred president are diminished in stature, if not completely disgraced.

To see once-dignified administration officials lined up at press conferences, like frail birds on a sagging telegraph line, glancing at their shoes rather than to look directly at a president who rambles errantly as he threatens viciously, is a common, almost daily, experience.  In the end, few of those officials survive with their reputations intact.

Only history—or, perhaps, sooner, a Congressional investigation—will reveal by what rippling chains of communication the president and his minions saw to the immediate and summary termination of Captain Crozier’s command of his nuclear-powered ship. According to one account, the acting secretary told a colleague on April 1, “Trump wants him fired.”

Suddenly reversing his initial supportive posture, Modly announced on April 2 that he was relieving Captain Crozier of his position.

A few hours later, having been relieved his command assignment, Captain Crozier solitarily walked along the ship’s deck towards the long gangway that would carry him to the Guam shore, below.

Solitary, but not alone.

As he approached the gangway’s gate, and as memorialized by crew members’ video images, the ship’s bell sounded and its whistle blasted. A loudspeaker’s voice announced: “Captain, United States Navy, departing.”

And, once below, standing on solid Guam ground, Captain Crozier pivoted, and waved modestly to those still aboard.

In an otherwise dreary moment of an otherwise awful pandemic, in a troubled democratic nation headed by a hapless leader, this will be a moment, an image, that will survive the ages.

Be it remembered as the date and place when the gap between the nation’s leadership and its citizens became too wide to close. When the indifference of a democracy’s leadership to even its most loyal citizens—its warriors—became too brazen to ignore. And when a decisive majority of Americans resolved that to recapture the nation’s soul they must democratically remove their president from office.

James C. Larew is an attorney in Iowa City. He served as general counsel and chief of staff for former Governor Chet Culver, a Democrat.

Top image by Alex Moore Photography of the USS Theodore Roosevelt anchored in the United Kingdom on March 26, 2015, available via Shutterstock.