The misleading math of rural coronavirus

Richard Lindgren: “Surely, you may be thinking, this virus mostly impacts urban hellholes like New York City. Unfortunately, you are likely wrong.” -promoted by Laura Belin

Fifty-one cases of novel coronavirus (COVID-19) come out of one rural nursing home in northern Florida. A funeral in a small Georgia town is a key source for 150 cases of COVID-19 and eleven deaths.

The math of how the coronavirus emerges in rural America is different from how it has hit New York City. If red state governors like Iowa’s Kim Reynolds don’t figure this out, their actions may cause more problems than solutions.

For the country as a whole, and especially in the cities like New York, the novel coronavirus initially traced an almost perfect high-growth exponential curve in both the numbers of confirmed cases and deaths. Our various attempts at abatement have brought the case growth rate down from an extraordinary 34 percent per day through mid-March down to below 10 percent daily growth as of this writing. Deaths continue to grow in places like New York at over 13 percent per day, which is a doubling of deaths nearly every five days.

Although based on a much lower starting number, Iowa COVID-19 deaths have also grown over the last week at a daily exponential rate very close to that of New York State. So how come it does not feel the same as the horror we are seeing from New York City hospitals?

At this writing, eighteen Iowa counties have yet to see a confirmed case of COVID-19, although recent data from Topos.com has flagged several Iowa counties, as shown above, as showing higher-than average daily percentage growth in confirmed cases.

Iowa is both early on that exponential curve and at the same time simply lacking in sheer volume of cases, which somewhat exaggerates daily growth rates. However, the long-term decline of beds and services in rural hospitals all over the state will not play well in the coming months. These counties will be hit in their own unique patterns.

A better model for rural counties

If you are in one of the unshaded rural counties in Iowa or elsewhere in the country, it is understandable to be frustrated with the social and business consequences of lockdown orders. Surely, you may be thinking, this virus mostly impacts urban hellholes like New York City. Or you may think that your community’s efforts have been so very successful that it is now time to resume normal life. Unfortunately, you are likely wrong.

What is the difference between the dark-red shaded Winneshiek County, Iowa (the top-right dark-red county) and say, Decatur County, down south on the Missouri state line, where I spent a lot of years? The answer may well be “Nothing.”

We have seen this seemingly random pattern before. I have written in the past about the stochastic nature (randomness with an underlying probability distribution, like rolling two dice) of mass gun violence. You can try to pin these tragic events on your pet one cause, but instead there are multiple causes with correlation, and on top of that remains a statistical randomness very close to the predictable probability pattern of how many people won the lottery drawing on any given day.

So, for sparsely-populated areas, I suggest that you think of the coronavirus as a shooter on a high perch with a “high-lethality” weapon, firing off in random directions. The odds are that he won’t be pointing at you today, but he is pointing at someone, and maybe not for any particular reason. In the case of the virus, transmission may be as much a function of chance as it is intention or carelessness.

Furthermore, it is the tightest gatherings of people that are more likely to be hit by this “shooter” than are scattered people. In this analogy, nursing homes, church gatherings, and tight manufacturing facilities like meatpacking plants are the most likely targets to be the first victims of this virus in rural America communities.

Implications of the “mass shooter” model

Ezra Klein at Vox.com has written an excellent summary of the major plans being floated for re-starting our social and business economy, and he has an excellent discussion of this piece on Matt Yglesias’ recent Weeds podcast entitled “How Does This End?” Note that none of these is “the federal government’s plan,” because apparently there is none. These plans each have benefits and drawbacks. The primary problem with most of them from my narrow perspective is that they do not address the “random mass shooter” model that I have suggested above which will continue to threaten rural communities.

My spouse is a medical high-risk target of this virus, so this gets personal with me. As long as there are asymptomatic “mass shooter” folks infected with coronavirus out walking the streets, we are not going anywhere. The risk is simply too high.

Similar risk also remains high for those “community gathering places” in rural America. Most of you may never personally know a person who dies from this virus, and that impacts the decision-making of too many people who do not understand the math.

But every day you will hear in the news about one more nursing home, one more religious cluster, one more close extended family that will bear the awful brunt of this killer. And unfortunately, like many pundits, you may not really care about them until it hits your town and your family. We may sadly become inured to these deaths, just as we have of the regular incidents of gun violence that continue to plague this nation more than any other western democracy.

Of the several plans I have researched, the plan by economist Paul Romer hits both my quantitative and “home-front” brain (Twitter thread here or similar Washington Post editorial plan here). Until we have an effective vaccine, Romer says, we need a huge federally mandated and enabled program to ramp up the testing of millions of people every month. This necessarily starts with the front-line medical workers and other people who interact daily with the public.

All these plans would require a massive investment in testing technologies and public health personnel. But given the trillions of dollars of business and personal losses we have already suffered, we should have already had a similar structure in place to secure that economy. We have been very lax with threats to public health, squeezing those resources almost to death over the past few years.

Until we see somebody go after those “mass Coronavirus shooters” or get an effective vaccine on the fast track, the geriatrics in this house, Miss Matilda Beagle and myself, will just be sitting here watching the birds on the pond out back. Unfortunately, a lot of people have it much worse than us, and we need to get smarter about this.

EDITOR’S NOTE: This map from the Iowa Department of Public Health shows the number of confirmed COVID-19 infections in each county, as of April 12. 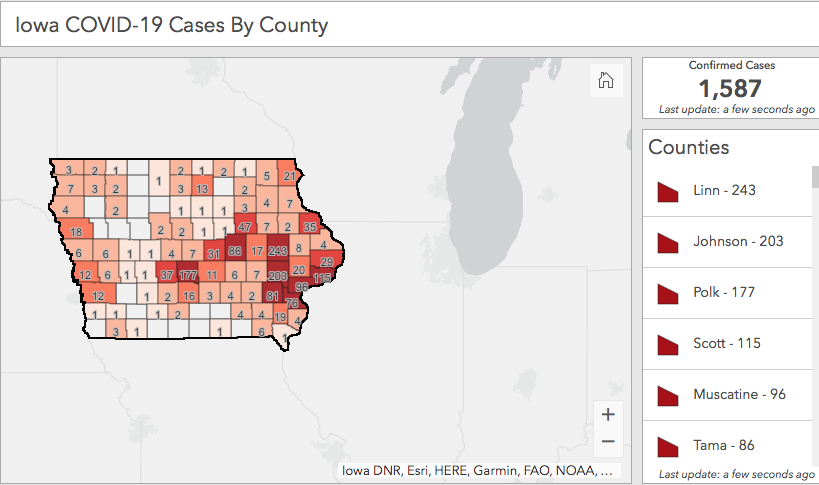