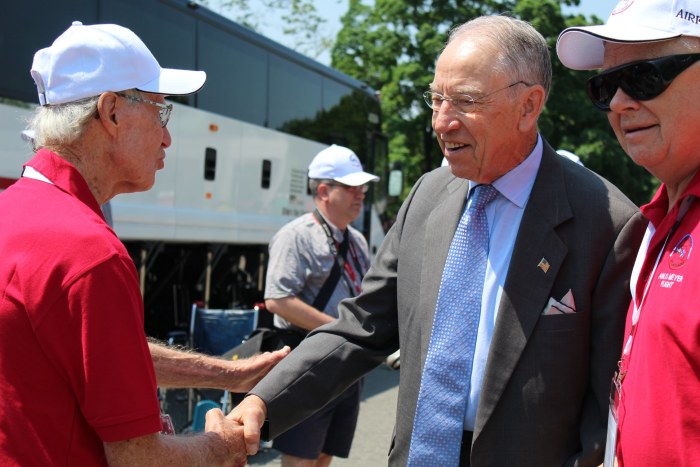 Let's not return to normal

Herb Strentz: Senator Chuck Grassley defines his duties as looking out for the citizens of Iowa, as though those duties have nothing at all to do with Trump’s actions. -promoted by Laura Belin

Maybe I had something just as panic-stricken in an email I sent U.S. Senator Chuck Grassley last year, when I suggested he might be “an assistant gravedigger for democracy.”

Both reflections tie in with concerns about the double whammy now striking our nation: dealing  with the novel coronavirus and having Donald Trump as president. Our country’s odds are good on surviving COVID-19, but not as good on surviving Trump. Virus-related issues crank up the zoom lens in monitoring the president, and that’s un-nerving because even a microscopic look at Trump can be as troubling as a microscopic look at the virus.

Most of us and certainly the news media are anxious for a “return to normal.” But in an essay titled “Prepare for the Ultimate Gaslighting,” writer and film producer Julio Vincent Gambuto argues that a “return to normal” is far from a return to our best, nor what our aspirations should be.

If we want to create a better country and a better world for our kids, and if we want to make sure we are even sustainable as a nation and as a democracy, we have to pay attention to how we feel right now. I cannot speak for you, but I imagine you feel like I do: devastated, depressed, and heartbroken.

The statistics on how COVID-19 affects the most vulnerable among us argue forcefully against a return to normal.

The supposed check-and-balance system of our federal government is out of whack. We have a disorganized, chaotic executive branch, a roll-over U.S. Senate and a U.S. House restricted to flailing away at the other two, with little effect. In the meantime, the state and federal judiciaries seem increasingly driven by concerns other than justice.

Emailing concerns to Iowa’s U.S. senators about Trump’s actions will evoke defenses of Trump and the senators’ actions, which cannot keep pace with Trump’s erratic behavior. The process repeats itself.

I may get a response from Senator Grassley on one issue, but before I receive it Trump has since doubled down, lied about his handling of the COVID-19 pandemic, and blamed state governors or the World Health Organization for his own mistakes.

Grassley defines his duties as looking out for the citizens of Iowa, as though those duties have nothing at all to do with Trump’s actions.

What we think of as courage in “speaking truth to power” results in being fired by the White House. Speaking truth to our elected representatives may be futile, although doing so can be revealing.

Which brings us back to my characterization of Grassley as a “assistant gravedigger” of democracy, which the senator “vehemently” condemned in a reply to me (posted in full below).

I had read an essay called “The Suffocation of Democracy” by Christopher R. Browning, a professor at the University of North Carolina and a leading historian on the Holocaust and Nazi Germany of between World Wars I and II.

In studying Germany and the rise of Hitler and his Nazi party, Browning says Paul von Hindenburg, elected president of Germany in 1925, became “the gravedigger of democracy” in Germany. (Like others in the Weimar Republic, Hindenburg thought he could control Hitler and benefit from the Fuehrer’s popular support.)

Browning argued, “If the U.S. has someone who historians will look back on as the gravedigger of American democracy it is Mitch McConnell.” The Senate majority leader’s “vicious cycle” in the digging, Browning said, is most clear “in the obliteration of traditional precedents concerning judicial appointments.”

That’s where Grassley came in as McConnell’s right-hand man when he chaired the Senate Judiciary Committee from 2015 through 2018.

For that reason, I likened Grassley to an “assistant gravedigger” of democracy in a June 2019 email. He objected to my analogy, along with depicting the U.S conditions today as similar to Germany’s in the 1930s.

I vehemently condemn any parallels that individuals attempt to draw between my work in the Senate on behalf of Iowans and the collapse of the Weimar Republic at the hands of the Nazi Party and Adolf Hitler.

One of the distinctions the senator drew was that the Nazi rise was rooted in European “ethnonationalism and socialism,” a philosophy “diametrically opposed to the American conservative” tradition.

But “ethnonationalism” is Trump in a nutshell, with his encouragement of the white supremacist mentality and his ending of global commitments, ranging from quitting the Paris climate agreement in 2017 to, most recently, cutting off U.S. funding to the World Health Organization. 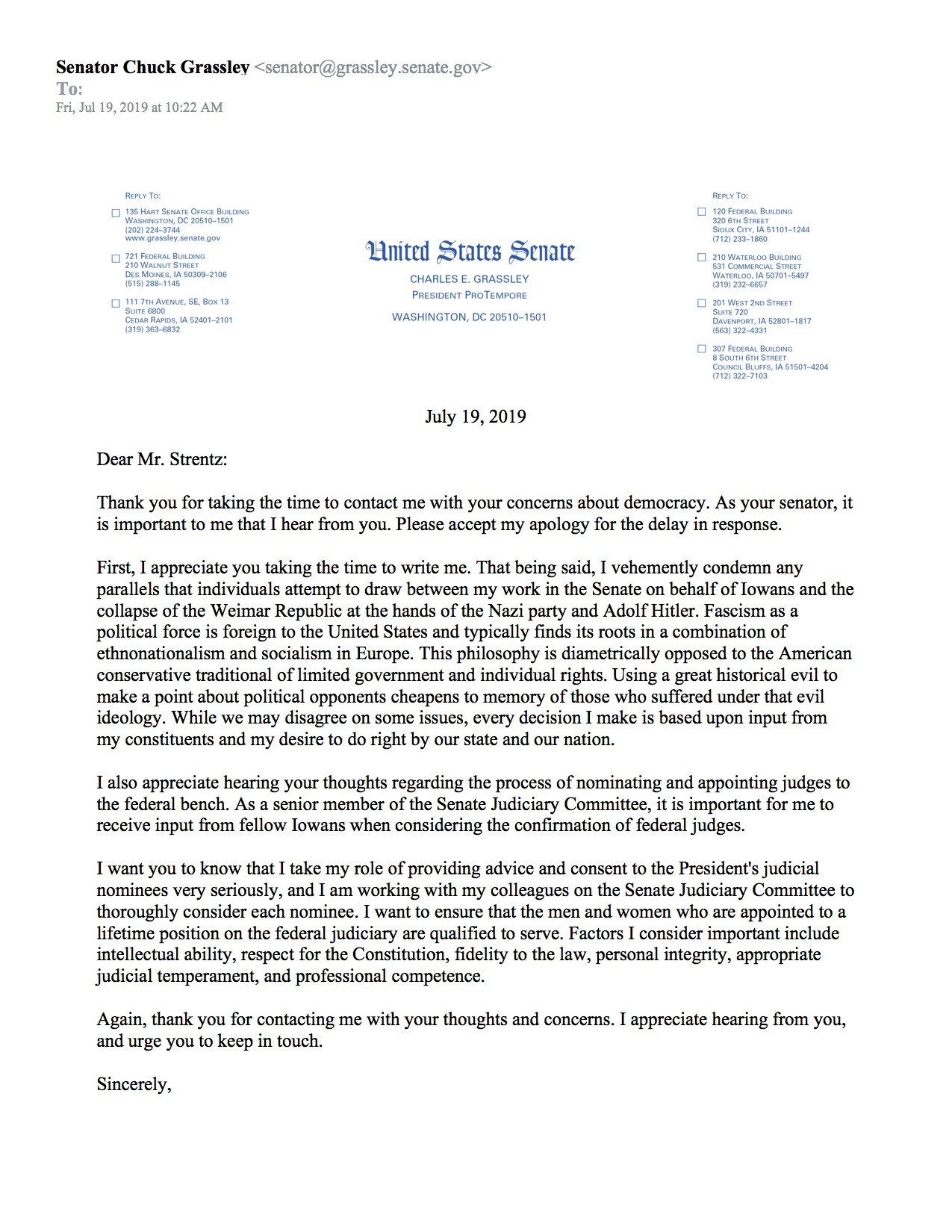