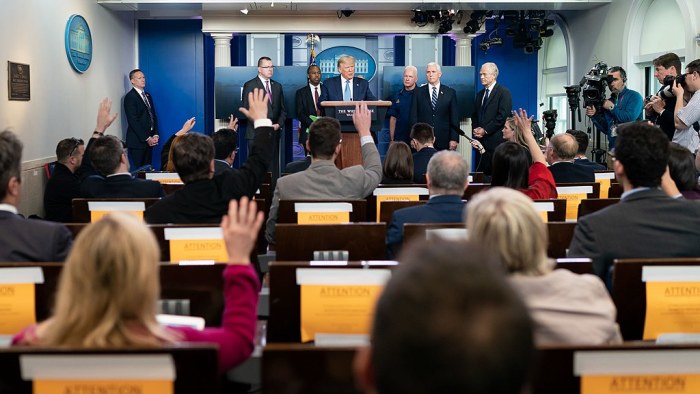 Ira Lacher: Too many media leaders still don't seem to understand that by not calling out Trump for who and what he is, they are perpetuating his legitimacy. -promoted by Laura Belin

Why aren't we being told what is obvious to anyone with a brain: The president of the United States is a lunatic. A dangerous lunatic.

That inescapable fact was brought home on April 23, when the person holding the office that for decades has been revered by hundreds of millions of people speculated that Americans could inject themselves with chemical disinfectant or submit to exposure of heat and light as a way to cure COVID-19.

Doctors and other health officials responded, respectfully, to Donald J. Trump that no, neither was a good idea. As the New York Times reported:

Dr. Deborah L. Birx, the White House’s coronavirus response coordinator, was sitting to the side in the White House briefing room, blinking hard and looking at the floor as he spoke. Later, Mr. Trump asked her if she knew about “the heat and the light” as a potential cure.

“Not as a treatment,” Dr. Birx said, adding, “I haven’t seen heat or light —” before the president cut her off.

What she should have said, live and on national television, was:

"That, sir, is extremely dangerous and could be fatal. In no way, shape or form should you suggest that anyone try something that life-threatening."

Had she done this, it would have been duly reported for everyone to see. But even if the hear-no-evil/speak-no-evil apes at Trump's side would pointedly refute his fantastical utterings, would the media call the jackass a jackass? If they did, it might be worthwhile continuing to air his "information briefings" live. (Editorial pages around the country have recommended that media quit doing this so the  information could be verified before it was presented to the public as fact.)

But don't blame only Trump's sycophants. When a responsible media outlet -- one that insists on verifiable facts -- couches Trump's lies with mealy-mouthed escapes such as "the president falsely claimed that ..." it is doing worse than deceiving the American people. It is giving credence to aiding and abetting suicide. As The Times further reported,

Mr. Trump’s hopeful comments about disinfectant use coincided with an alarming rise in accidents with household cleaning products in recent weeks, according to doctors who monitor activity at poison call centers. On Monday, the Centers for Disease Control and Prevention reported a growing number of calls to poison control centers and a significant increase in accidental exposures to household cleaners and disinfectants.

When the person with their finger on the nuclear button advises Americans to drink bleach, it's time for those who style themselves as the nation's watchdogs to quit pussyfooting.

Unfortunately, too many media leaders still don't seem to understand that by not calling out Trump for who and what he is, they are perpetuating his legitimacy. And despite the office he holds, he doesn't deserve any more legitimacy than someone who claims to have been abducted by aliens.

The Committee to Protect Journalists, an august group whose board of directors includes respected journalists such as NBC News anchor Lester Holt and David Remnick of The New Yorker, had an opportunity to stop the tilt-a-whirl when it published a recent report titled "The Trump Administration and the Media," authored by Leonard Downie Jr., a former executive editor of The Washington Post. The report documented example after example of how Trump, throughout his term, has negated any credibility by spewing more than 16,000 lies, misrepresenting facts en masse, and warring on journalists.

But it was disappointing that Downie stopped short of calling for what is necessary. He concluded,

"The press has a crucial dual role: informing Americans as fully as possible about the health and economic crisis - and thoroughly scrutinizing how the federal, state, and local governments and the private sector are responding. That includes aggressive reporting to hold the president and his administration accountable for how they are steering the country through this dangerous storm.

"At this writing, I believe the news media have been rising to that challenge, despite increasingly difficult working conditions."

We deserve more from the man who helped the Post aggressively and bravely expose the Nixon administration's criminality, and from those who have historically been charged to "comfort the afflicted and afflict the comfortable."

Editor's note from Laura Belin: Four professors of journalism and media studies wrote an open letter on April 25 urging leaders of major U.S. television networks to stop airing the White House COVID-19 briefings live. "Because Donald Trump uses them as a platform for misinformation and disinformation about COVID-19, they have become a serious public health hazard—a matter of life and death for viewers who cannot easily identify his falsehoods, lies and exaggerations," they wrote.