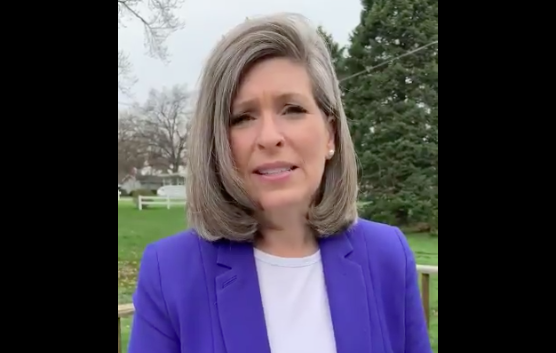 Joni Ernst got the memo: Blame China for COVID-19

“If China hadn’t covered up #Covid19, the effects of this pandemic could have been lessened,” U.S. Senator Joni Ernst posted on her political Twitter feed and Facebook page on April 25. “We need to hold China accountable.”

Her words were practically a carbon copy of how the National Republican Senatorial Committee has advised endangered GOP incumbents to discuss the novel coronavirus (COVID-19) pandemic.

Politico’s Alex Isenstadt was first to report on the lengthy memo by the Republican consulting firm O’Donnell & Associates. You can read the document here. Isenstadt noted,

It stresses three main lines of assault: That China caused the virus “by covering it up,” that Democrats are “soft on China,” and that Republicans will “push for sanctions on China for its role in spreading this pandemic.”

“Coronavirus was a Chinese hit-and-run followed by a cover-up that cost thousands of lives,” the April 17 memo states.

The document urges candidates to stay relentlessly on message against the country when responding to any questions about the virus. When asked whether the spread of the coronavirus is Trump’s fault, candidates are advised to respond by pivoting to China.

Few politicians are better at staying “relentlessly on message” than Ernst. She put the memo’s advice into practice with this short video posted on Saturday evening.

If China hadn’t covered up #Covid19, the effects of this pandemic could have been lessened. We need to hold China accountable pic.twitter.com/yUXEIyfZ0E

Hello, this is Joni Ernst. In recent months, we have seen so many bad actions out of China. The first and foremost, of course, is the COVID-19 pandemic. If only they had stood up and alerted the world much sooner, the pandemic could have been lessened.

We need to make sure that we as America are holding China accountable.

Ernst has struck similar notes in other recent tweets and Facebook posts.

It should be clear to everyone that China’s “Wet Markets” are a global health risk. We should be doing everything we can to shut them down – and we certainly shouldn’t be spending US tax dollars on them. https://t.co/oOL74ZWlpY

The Chinese Communist Party lied about the initial spread of #COVID19, lied about the numbers of cases and deaths, and now it looks like they were lying about the virus’s origins. It’s clear we can’t trust the CCP.

Here’s one from her official feed (not the one used for her Senate campaign):

Today, I joined my colleagues in calling to end this funding & express my deep concern over past federal funding to the controversial Chinese state-run Wuhan lab. pic.twitter.com/ElTGEPSgj6

When your party’s flag bearer has been as incompetent as Trump, I see why deflecting blame to China is appealing. As Jonathan Martin and Maggie Haberman reported for the New York Times this weekend, “a cascade of ominous public and private polling have Republicans increasingly nervous that they are at risk of losing the presidency and the Senate […].”

Ernst’s Washington, DC-approved talking points don’t explain why other countries have managed the pandemic more effectively than has the Trump administration. As others have reported exhaustively,

Throughout January, as Mr. Trump repeatedly played down the seriousness of the virus and focused on other issues, an array of figures inside his government — from top White House advisers to experts deep in the cabinet departments and intelligence agencies — identified the threat, sounded alarms and made clear the need for aggressive action.

The president, though, was slow to absorb the scale of the risk and to act accordingly, focusing instead on controlling the message, protecting gains in the economy and batting away warnings from senior officials. It was a problem, he said, that had come out of nowhere and could not have been foreseen.

Blaming China also won’t change the fact that the federal government has failed to distribute enough personal protective equipment to parts of the country in great need, sometimes impeding state efforts to secure PPE for their own health care providers. A Washington Post investigation exposed how “From the Oval Office to the CDC, political and institutional failures cascaded through the system and opportunities to mitigate the pandemic were lost.”

For Republican senators like Ernst, the less said about the Trump administration mistakes, the better.

The GOP strategy memo suggests other “hits” to drive home a winning message.

Ernst has already deployed versions of those talking points.

We need answers from the Chinese Communist Party and the WHO about the origins of #COVID19. pic.twitter.com/Ct7MOW1lEf

I expect to hear more along these lines in the senator’s future social media posts, media interviews, and conference calls with Iowa reporters.

Ernst, running her first reelection campaign for U.S. Senate, in response to the question — “What ideas do you have/are considering for holding China accountable for their role in the pandemic?” — highlighted the bill she has sponsored to ban taxpayer dollars from being spent at wet markets and the bicameral letter she signed asking Congress to eliminate funding for the Wuhan Institute of Virology.

“Some people have suspected that it was either the Wuhan lab or those Chinese wet markets that started this current pandemic,” Ernst said. “We want to make sure that we are not sending taxpayer dollars into China and supporting those types of inhumane and unsanitary procedures. We could go on and on and on, of course, about China.”