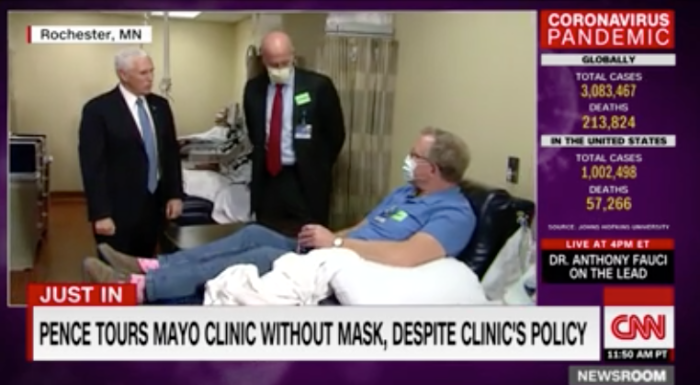 Dumb stuff during a pandemic

Bruce Lear: “America is waking up to yet another harmful condition that seems to be infecting the country. I’m afraid it’s a disease with no vaccine.” -promoted by Laura Belin

One of the baffling things about COVID-19 is the symptoms vary from person to person. One person may have few respiratory symptoms but will lose the senses of taste and smell. Others may have a severe head ache and stomach issues. Still others have severe breathing problems, a high fever, and need to be rushed to an emergency room.

Now, America is waking up to yet another harmful condition that seems to be infecting the country. In medical terms it might be called “Intellectualimbacility.” I’ll just call it, “Dumb stuff during a pandemic.”

You don’t even need to have the disease to have this symptom, and I’m afraid it’s a disease with no vaccine.

I know, people doing dumb stuff was here long before this virus. After all, there was that time when Tide Pods became after school snacks. But my point is the spread of the dumb stuff and the defense of it by head-nodding allies seems to be growing in this country almost as fast as the virus spread. It’s a serious threat to our republic.

I am sure those of a certain political bent will argue, this is just another liberal, socialist, elitist, attack on the beloved leader. But come on, even those who only turn right when driving will have to agree with a few of these examples.

I certainly understand the need to open the economy as soon as possible. People are hurting and the number of unemployed may rival the stories we’ve heard from parents and grandparents when they were using the great depression as an argument to save yet another used butter container. But putting economics above personal and community health is both reckless and dumb.

Full disclosure: I’m not suffering like millions of Americans are. My pandemic isolation is more like “retirement on steroids.”  No homeschooling here. I’m not an essential worker, like the heroes forced to the front lines of this war.  Those folks should all be receiving hazard pay, the supplies they need, and our deep gratitude.  I’m not even having to work from home except when I’m shamed into doing some yard work, but only after my daily episode of “The Waltons.”

I may be retired, but I am not so retired I don’t care about the economy and about our future. The tensions between opening the country and protecting ourselves and our families is real, and I think people can worry about both at the same time.

I understand protesters. That’s America. What I can’t understand is gun-toting terrorists shouting and threatening health care workers, the very people who are risking their lives and the lives of their families to save us from this plague.

These protesters are egged on by the “President in tweet” telling them, “Liberate Minnesota.” “Liberate Michigan”

“Liberate Fill in the blank with any state run by a Democrat he doesn’t like.”

Trump is really protesting his own guidelines.

But gun-loving protesters aren’t the only ones suffering from this symptom. This symptom has infected a few clergy.  Some right-wing, evangelical pastors are ignoring science for a higher power. Despite all the warnings and laws, they hold mass church services and dare the authorities to take action. They remind me of the old story I heard in church.

There was a man stranded on top of his house in the middle of a raging flood. First rescuers in a boat came and the man said, “Don’t worry, God will rescue me.” So, the boat left. Later a helicopter came, and the man said the same thing. He drowned. When he got to heaven he said to God, “Why didn’t you save me from the flood?” God replied, “I sent a boat and a helicopter.”  For us, medical science is the boat and the helicopter.

Not only are these ministers showing disdain for science, they show disdain for the health of the very congregations and for the communities where they minister. That’s not spreading the gospel; it’s spreading a deadly virus.

It’s dumb. It’s selfish. I fear it’s motivated by the love of a full collection plate instead of a love for humanity.

This symptom is not partisan. The mayor of Las Vegas wants the Vegas strip to open, and let the casino infection rates determine which casinos stay open. She is an independent. She also thinks the Las Vegas heat will protect gamblers. Even by Las Vegas standards, that’s cold, and it’s dumb.

Not to be outdone, Brian Kemp, the Republican governor of Georgia, opened hair dressers, massage parlors, and nail salons. That runs contrary to even the White House recommendations, and unless shops are employing Edward Scissorhands to cut hair, and masseuses and nail technicians with Go Go Gadget arms, everyone is at risk.

Some Midwestern governors also have succumbed to this symptom. Leaders in Nebraska, South Dakota, and Iowa all seem to do verbal gymnastics to avoid saying meatpacking plants are the root cause of outbreaks. They pretend huge meatpacking companies are wonderful employers, always looking out for their workers. Yes, this is an essential industry but the workers, often those on the lowest economic rung, have a right to have their health protected too.

Pretending meatpackers always look out for their employees is like pretending Trump medical advisers are never under political pressure. As a primary result of outbreaks in the meatpacking industry, both Sioux Falls and Sioux City are now “hot spots,” something you never thought you would hear in the national media.

Finally, if I were giving awards for dumbest thing said during the pandemic, that award would go to none other than Donald J. Trump. I understand his loyal followers changed their explanations. First, he didn’t say it. Then they said, “It was sarcasm.”  When that didn’t work, the explanation was “He was processing science out loud.”  No, it was just dumb and dangerous. Here is what he said:

“Suppose that we hit the body with tremendous, whether it’s ultraviolet or just very powerful light, and I think you said that it hasn’t been checked and you’re going to test it,” Trump said. “Suppose you can bring the light inside the body.”

“Then I see the disinfectant where it knocks it out in one minute,” Trump continued. “Is there a way we can do something like that by injection inside, or almost a cleaning? … It would be interesting to check that.”

Medical experts rushed to warn the gullible, don’t swallow disinfectant and try to put ultraviolet light inside you.  Maybe it’s time for a standard disclaimer in front of any presidential briefing: “Don’t try this at home.”

Like the philosopher Forrest Gump says, “Stupid is as stupid does.” I understand that what one person regards as dumb may differ from another. But during a pandemic, dumb stuff might not just mean people point, or roll their eyes. It may be a matter of life and death.

Top image: Screen shot from CNN report on Vice President Mike Pence visiting the Mayo Clinic on April 28 but not wearing a mask, which the facility requires.