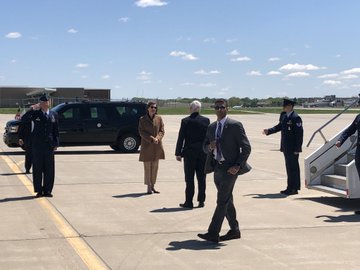 The gaslighting was strong during Governor Kim Reynolds’ White House meeting on May 6 and Vice President Mike Pence’s Iowa visit two days later. Pence described Iowa as a COVID-19 “success story” on Wednesday. He elaborated in West Des Moines on May 8,

“Iowa has been leading the way with Governor Kim Reynolds […] From very early on, the strong steps and mitigation efforts have made a difference here. We grieve the loss of life here in Iowa, but the numbers speak for themselves. The outbreak in Iowa has not been like we’ve seen in other states and other metropolitan areas around the country. It’s a tribute to your early, strong steps.”

Meanwhile, Sioux City still tops a national list of “metro areas with the most recent cases and deaths, relative to their population, in the last two weeks.” Waterloo/Cedar Falls is fourth. Confirmed COVID-19 cases are rising rapidly in several smaller counties where Reynolds lifted restrictions on some business activities last week.

But that’s a topic for another day.

I was struck by Reynolds’ failure this week to follow best practices for slowing the spread of the virus.

The Centers for Disease Control advises Americans to avoid non-essential travel. The governor has repeatedly urged Iowans to “work from home if you can.” Yet Reynolds traveled to Washington for a photo-op with President Donald Trump, when she could easily have briefed him on our state’s COVID-19 mitigation efforts through a phone call or video conference.

Since March 21, the governor and Iowa Department of Public Health have recommended,

Iowans who have traveled recently for business or spring break vacations, whether internationally or domestically outside of Iowa, should strongly consider self-isolating for 14 days. This will support Iowa’s ongoing efforts to mitigate the spread of COVID-19, and limit the introduction of the virus from other points of travel.

Yet after returning from her short trip on May 6, Reynolds went about her usual business.

At the governor’s news conference the next day, WHO-TV’s Dave Price noted Reynolds had chosen not to self-quarantine. “Should Iowans feel safe now to travel wherever and not take that precaution?”

Reynolds replied, “Iowans need to make those individual choices themselves. They need to apply personal responsibility, take into account where they’re going, what they’re doing.” She noted that she had not flown commercial; rather, her campaign fund paid for a private flight. She was tested for COVID-19 upon arrival to the White House, had her temperature taken multiple times during the visit, and returned to Iowa immediately after meeting with Trump.

But again, Dave, people need to start–you know, they have to make these personal decisions. They have to apply personal responsibility. If you are a vulnerable Iowan, and you have underlying conditions, then you maybe need to rethink, you know, your travel and probably continue to stay home and limit your trips outside of the home.

Reynolds has shifted the burden from travelers (who could isolate to reduce the risk of spreading the virus) to Iowans at highest risk of becoming severely ill (who should stay home if they’re worried). But we know that even young people or those without known risk factors can end up on ventilators or worse. It’s happened in Iowa.

Later on May 7, the White House confirmed that a staffer “whose job potentially put him in close daily contact” with Trump had tested positive for coronavirus.

The infected staffer is one of Trump’s personal valets, the military staff members who sometimes serve meals and look after personal needs of the president. That would mean the president, Secret Service personnel and senior members of the White House staff could have had close or prolonged contact with the aide before the illness was diagnosed.

At that point Reynolds should have realized that she had possibly been in close proximity to asymptomatic carriers of COVID-19. The CDC now recommends face coverings in public settings to reduce the risk of people unknowingly spreading the virus. Several faculty members at the University of Iowa medical school have recommended universal use of plastic face shields as a superior alternative to masks that leave the eyes unprotected.

The governor spent part of May 8 at events with Vice President Pence in central Iowa. His trip ran a bit behind schedule after Pence’s press secretary tested positive for COVID-19, and several aides did not fly with the entourage on Air Force Two.

Yet no government official was wearing a mask in any of the published photos of Reynolds’ appearances with the vice president.

Welcome back to Iowa @VP Mike Pence! Appreciate the partnership from @POTUS and the entire team. pic.twitter.com/X3dJDaRkbt

Thank you to the faith community for being thoughtful and prayerful in deciding how to reopen. pic.twitter.com/4HGkMo2oGt

According to the Des Moines Register reporters covering the visit,

When Pence disembarked at 12:21 p.m. with U.S. Sens. Chuck Grassley and Joni Ernst, they were greeted by Iowa Gov. Kim Reynolds. No one wore a mask.

Ahead of their arrival, Secret Service, Iowa National Guard personnel and Des Moines police waited outside the airport, also without masks.

Photographs by the Register’s Zach Boyden-Holmes suggest Pence was not always maintaining a six-foot distance from others shortly after arriving in Des Moines. Neither did Senators Grassley and Ernst as they disembarked from Air Force Two. Remember, the vice president’s own press secretary just tested positive.

Seating was arranged to encourage social distancing at the governor’s other events with Pence, and people were screened for COVID-19 symptoms upon arrival. But few attendees covered their faces, even though we know asymptomatic carriers contribute to community spread. Aside from some journalists and staff, Rabbi David Kaufman was the only person wearing a mask during a meeting Reynolds and the vice president held with a small group of clergy.

Reynolds often says she trusts Iowans and believes they will do the right thing to slow the spread of COVID-19. She would do better to lead by example.

UPDATE: Jennifer Jacobs of Bloomberg News reported on May 10, “Iowa’s Kim Reynolds may self isolate after her White House visit Wednesday. WH officials have been in contact with Iowa officials about situation. Iowa state medical director, Dr. Caitlin Pedati, who was also in coronavirus task force mtg Weds with VP staff, self isolating.”

Jonathan Lemire of the Associated Press reported the same day that Pence is also self-isolating due to his aide’s positive test. The vice president knew about that before his plane took off for Iowa and should have canceled his trip.

LATER UPDATE: Robert Mackey reported for The Intercept on May 9 that five food industry leaders arrived at a planned round table with Pence wearing masks, but removed them upon request by an aide to Pence. The leaders were Ron Cameron of Mountaire Farms, Ken Sullivan of Smithfield Foods, Rodney McMullen of Kroger, Noel White of Tyson Foods and Zippy Duvall, the president of the American Farm Bureau Federation. Here is a video of the aide (who did not keep a safe distance) asking them to take the masks off.

Reynolds said at her May 11 news conference that she would go into a “modified quarantine” plan and would be tested for COVID-19 every day. Brianne Pfannenstiel reported for the Des Moines Register,

Reynolds’ news conferences previously had been open to pool reporters and photographers, but Monday’s was held only through a dial-in conference line and video livestream. […]

Spokesmen for Grassley and Ernst said that neither senator has been advised to self-isolate, and neither is planning to do so. On Friday, they said the senators had been tested for the coronavirus before boarding Air Force Two with the vice president.

Grassley is in the age group at highest risk for complications from COVID-19.

Reporter Erin Murphy asked Reynolds on May 11 whether she should have been wearing a mask on Friday, based on what she knows now, and whether more Iowans should be wearing them in public.