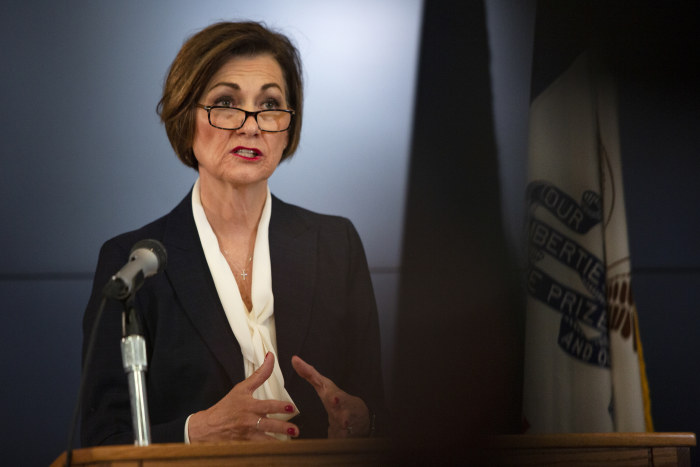 Governor: Feds "didn't have context" when approving antivirals for Iowa

Iowa is among a dozen states picked to receive shipments of the antiviral drug remdesivir for use in treating patients hospitalized for novel coronavirus, the U.S. Department of Health and Human Services announced on May 9. Our state will receive ten cases, which works out to 400 vials of the medication.

Governor Kim Reynolds implied at her latest news conference that when federal officials approved the shipment, they didn’t understand the reasons Iowa’s COVID-19 case counts have been rising. Publicly available information does not support that explanation.

Earlier this month, the U.S. Food and Drug Administration approved the use of remdesivir for treating patients “with low blood oxygen levels or needing oxygen therapy or more intensive breathing support such as a mechanical ventilator.” The drug’s manufacturer, Gilead Sciences, Inc., agreed to donate “approximately 607,000 vials” for use within the U.S. over the next six weeks.

Eric Boodman and Casey Ross reported for StatNews on May 6 that medical professionals were “sharply criticizing the federal government for the uneven and opaque way it is distributing its supply.”

About two dozen hospitals are believed to have been chosen to receive the drug so far, but clinicians told STAT it is unclear why some medical centers were chosen to receive coveted doses while others weren’t — and who is making those decisions in the first place. […]

Helen Boucher, chief of infectious diseases at Tufts Medical Center in Boston, said not all the hospitals authorized to receive remdesivir in Massachusetts are the ones with the most Covid-19 patients. “In our state, it’s really unclear how the decision was made,” she said. “It has us concerned that the maximum number of patients won’t benefit.”

The Infectious Disease Society of America wrote in an open letter to Vice President Mike Pence last week, “The plan for distributing remdesivir should be transparent and should be based on state and regional COVID-19 case data and hospitalization rates.”

The May 9 statement from the Health and Human Services said the antivirals would be sent to “areas of the country hardest hit by the pandemic,” and that state health departments would determine how to distribute the doses to local hospitals.

Reynolds said during her May 11 news conference that the remdesivir arrived “over the weekend.” Iowa Department of Public Health officials already had one conference call with doctors and pharmacists, with another call scheduled for the afternoon of May 11, she said, to work out a distribution plan based on where patients would benefit most.

WHY WAS IOWA CHOSEN?

Iowa was not an obvious choice for early shipments of remdesivir.

During a White House meeting with Reynolds and State Medical Director Dr. Caitlin Pedati on May 6, Pence described our state’s management of COVID-19 as “a success story.” At a West Des Moines event on May 8, the vice president asserted,

“Iowa has been leading the way with Governor Kim Reynolds […] From very early on, the strong steps and mitigation efforts have made a difference here. We grieve the loss of life here in Iowa, but the numbers speak for themselves. The outbreak in Iowa has not been like we’ve seen in other states and other metropolitan areas around the country. It’s a tribute to your early, strong steps.”

Iowa currently ranks 21st in total confirmed COVID-19 cases. Aside from Rhode Island, the other eleven states selected to receive donated doses of the antiviral have more cases.

On the other hand, the Sioux City and Waterloo/Cedar Falls metro areas have ranked high on national lists of where coronavirus appears to be spreading most rapidly. The Sioux City Journal’s Dolly Butz reported on May 9 that “the rate of hospitalization for COVID-19 in Woodbury County has more than doubled the national average,” fueled by an outbreak at a nearby meat processing plant in Nebraska. The area’s two major medical centers “have opened intensive care units in other areas of the hospital and requested additional ventilators and personal protective equipment.”

Rachel Droze of WOI-TV asked at the May 11 news conference how Iowa “got on the short list” for these shipments. IDPH Deputy Director Sarah Reisetter replied,

Our understanding is that ASPR [the Health and Human Services’ Office of the Assistant Secretary for Preparedness and Response] did some analysis based on current case counts, and they looked at areas of the country where case counts had increased over the last seven-day period from the time that they were looking at that.

So I think our phone call with them was on Wednesday or Thursday of last week [May 6 or 7]. And so they had identified case counts in one part of our state as increasing, and so that’s our understanding of how they made the initial decisions about where those initial shipments were going to go.

Staff for the governor’s office and health department have not responded to Bleeding Heartland’s inquiries about whether state officials requested supplies of remdesivir during the phone call Reisetter mentioned.

“THEY DIDN’T HAVE THE CONTEXT”

Earlier in the news conference, Reynolds had said she’ll soon announce plans to lift more COVID-19 mitigation measures. Caroline Cummings of Sinclair Broadcast Group noted that Reisetter had said rising case counts got Iowa selected for antiviral shipments. With coronavirus cases still increasing, how would the governor explain to Iowans why she is about to ease more restrictions at the end of this week? Reynolds explained,

Well, it’s because of that very testing. We had the opportunity with Dr. Pedati when we were at the White House to talk to Dr. [Deborah] Birx [the president’s coronavirus task force response coordinator]. She wasn’t aware that we were doing extensive targeted testing in a lot of our manufacturing and processing facilities.

And so they were very impressed with the testing, not only the diagnostic but the serologic testing that we were doing as well. And especially with the case investigation and the contact tracing, she really commended us on our ability to do that as well.

And so once we put it into context, with what we had been doing in the state, she said, well that explains some of the increase in the numbers that we were seeing, not only in the Des Moines area, but also in northwest Iowa as well. And so, we were able to explain that. […]

It gave us an opportunity to explain what was going on. They didn’t have the context of that when they were sending out the remdesivir. So it brought more context to the situation.

Reynolds has implied repeatedly that our rising case counts reflect “proactive” testing in hot spots, rather than rapid spread of coronavirus. Is she saying Iowa shouldn’t be getting additional antivirals, based on current trends?

Consider the timeline: the governor and state medical director went to Washington on May 6. According to Reisetter, IDPH officials had a phone call with the Office of the Assistant Secretary for Preparedness and Response on May 6 or 7. The HHS news release said, “Beginning on the evening of May 7, 2020, the process was initiated to deliver cases of the drug” to states including Iowa.

So contrary to the governor’s suggestion that federal officials “didn’t have the context” when they put Iowa on the distribution list, the antiviral shipments went out after Iowa leaders had briefed them on our “strike teams” and drive-through testing sites in communities where COVID-19 outbreaks have occurred in meatpacking plants or nursing homes.

I will update this post as needed if staff for the governor or IDPH clarify whether the state requested remdesivir supplies for Iowa’s severely ill hospitalized patients.

UPDATE: NBC News obtained a copy of a White House coronavirus task force report dated May 7, which listed Polk County, Iowa among the country’s 10 top areas where COVID-19 cases were increasing over the previous week.

Here are the latest official figures for COVID-19 cases and trend lines in Polk County, from the state website coronavirus.iowa.gov. 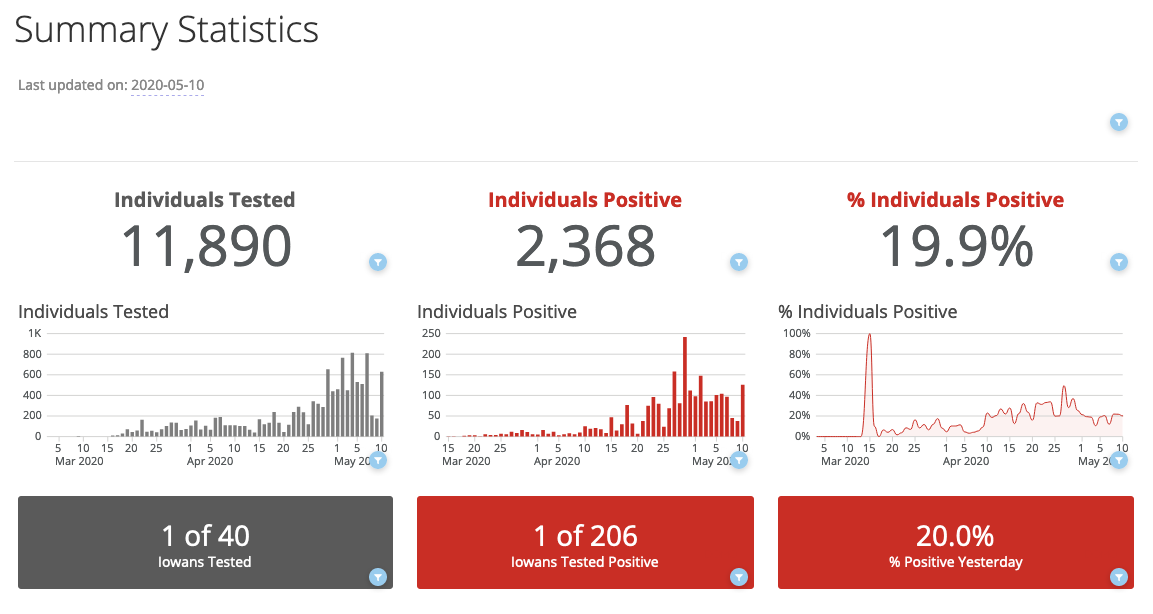 SECOND UPDATE: Reisetter discussed the plan for distributing remdesivir at the governor’s May 12 news conference. Each patient will need six to eleven vials, which must be administered intravenously in the hospital.

The State Hygienic Laboratory will distribute the 400 vials according to the following criteria: