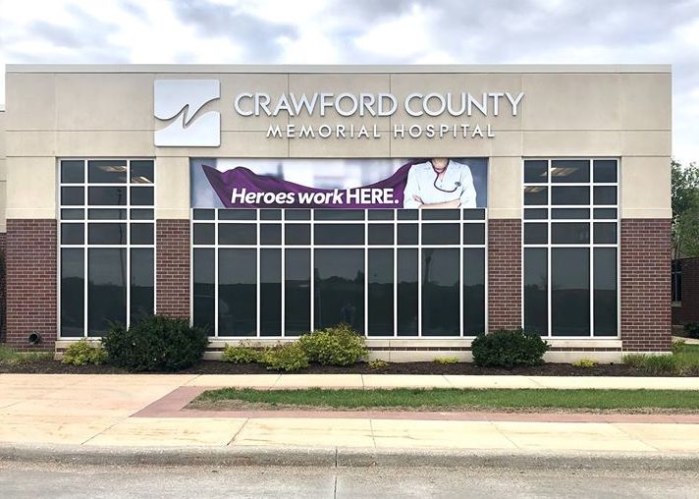 Rural hospitals: Our canary in a coal mine

Having chest pains? Cut off a finger? Need medical care now? For anyone living in a rural area there is no guarantee the closest hospital can provide needed emergency care.

Signs may say “Hospital” and the doors may be open, but odds are they will not have the capability or staff to care for an urgent need or life-threatening emergency.  Logic tells us in an emergency increased time and distance can be life-threatening.  One study found that rural hospital closures are associated with a 5.9 percent increase in inpatient mortality.  1, 2

Ours is a “profits above all else” economy, and rural hospitals close because they are not profitable, often operating at a loss. Those that remain open have restructured, eliminated services, and reduced staff to the point they can no longer offer basic medical care. Hospitals lose money delivering babies which has caused dozens of Iowa hospitals, rural and urban, to discontinue this service.  Iowa is 50th out of 50 states for the number of obstetricians per population. 3 , 4

Due to the nature of the population served, rural hospitals cannot compete, and rural residents are the losers.

YOUR ILLNESS IS ANOTHER PERSON’S DIVIDEND

Just as miners took canaries into coal mines to warn of danger, we would be wise to look at rural hospital closures as our warning. The COVID-19 pandemic is like a magnifying glass exposing the flaws in our health care system as millions are unable to pay for health care. There is a commonality between the financial pressures of rural hospitals and the financial pressures of urban hospitals as they treat unprecedented numbers of COVID-19 patients. Both are facing the double whammy of uncompensated services and a severe drop in profitable medical procedures and routine health care.

Illness as a for-profit commodity demands “fiscal efficiencies” that are in stark opposition to a healthy, resilient system capable of providing health care for everyone. Illness and injury are big business; bottom line – make a profit or close-up shop. For stockholders – wonderful, but for the rest of us – not so much.

Although most of us struggle in our current system, health care is still considered one of the best investments, regardless of the negative effect the pandemic has had on the long running bull market. Health care is one of the last things people can do without, and we should not have to.  5 , 6

There is no doubt that we need to maintain our system of government and our economy, but is it necessary for health care to be a wealth building commodity?  There are countless ways for businesses to make money, for stockholders to receive dividends, and for entrepreneurship to be encouraged.  Many legislators work to correct health care’s systemic problems, but even those band-aides are strongly opposed by this administration and conservatives.

Surely, we can create a nation-wide, comprehensive medical infrastructure that serves us all and has the resiliency to respond to the unknowns of medical catastrophes in addition to basic health care.  The pandemic has reminded us of what many politicians and Wall Street have forgotten.

Big business is important, but it not the most important.  Our economy has been built on the backs of our workforce, paid and unpaid, and our small business owners. Not only is making health care accessible to everyone the right thing to do, it is in our best interests to have a healthy population. By the very nature of being human, we deserve respect and fair compensation for our work.

If we can send a man to the moon (pardon that tired old chestnut), surely we can find a way to provide a health care infrastructure with the mission of keeping all people (not the stock market) healthy and alive, and at the same time lessen the burden of small business owners, most of which see yearly increases in their health insurance burdens but do not receive millions in bail out money and subsidies.

WE ARE IN UNCHARTED TERRITORY

We can only guess at the long-term effects of our hospitals’ economic disruption.  Their losses are estimated at $50 billion a month, affecting large elite hospitals, and urban and rural hospitals alike. Even the most profitable hospitals, such as the Mayo Clinic, have seen revenues tumble as procedures and tests are postponed and millions of newly unemployed lose health insurance. Mayo may be able to weather their shortfalls by using their $10.6 billion cash and investment reserves, but what will remain for the rest when this is over? 7

There is a strong probability that many struggling hospitals will go the way of rural hospitals by affiliating with others, eliminating vital departments that are not profitable, or closing.  Hospitals are reaching their breaking point. Our country’s ability to provide even basic services could very well be in jeopardy. 8

IT’S TIME TO ASK HARD QUESTIONS AND RETHINK OUR PRIORITIES

For most of us, when the worst of the crisis is over, a big question will be how to pay for the  medical care that is still available. COVID-19 has cost millions of American jobs and, along with it, health insurance coverage. Economists predict that as businesses gradually open, most people will be able to find work, but that is no guarantee employers will be able to function as they did before the virus, or be able to pay health insurance premiums that will most assuredly increase. 9

The pandemic has laid bare how dysfunctional, and sometimes cruel, our system of health care reimbursement can be. We can see clearly, as never before, how our political system has been compromised by legislation that give profits and power as payoffs to major contributors. There is something very wrong when our president fails to acknowledge the horrendous loss of lives as he pressures states to “open up” the economy, and when millions of small business relief dollars go to major corporations.

Iowa’s governor and Republican lawmakers embrace the president’s push to minimize the need for protecting workers in meat packing plants, and patients and staff in nursing homes. They hide statistics and recklessly sacrifice countless numbers of American lives, equating these loses as necessary to bolster the “economy” (measured by the stock market) and as a patriotic sacrifice, willingly made.

There is a glaring disconnect in values between Republicans who support President Trump’s administration, his wealthy backers and media allies, and the rest of us. Their personal gain drives their decisions. Average citizens’ voices can have little effect upon policy change in our current political climate. When there are profits to be made, as in health care and health insurance, “crony” capitalism and unfettered “predatory” entrepreneurship will always outsmart regulation, with little regard for the public good. Health insurance companies may moan about low profit percentages, but 2 percent on billions of dollars is still a lot of money.

HERE IS WHERE IT GETS TRICKY

Has it ever seemed strange that Republican presidents, governors, representatives, and senators almost always vote as a block, even on bills that would be detrimental to most individuals, small businesses and family-farms?  Why the mega- wealthy, politicians, multinational corporations, and venture capitalists get inside information, subsidies, and big tax cuts and, if we are lucky, the rest of us may get a little chump change? Why $62 million farm relief dollars went to a corrupt Brazilian multinational corporation? 10

There is a reason for that.

We need new, better leadership and the state and national level, but it’s an uphill battle.

Candidates running for office promise to represent us, to look after everyone’s best interests, to help everyone prosper…but don’t count on it. Too many hide their true motives, knowing they will renege on their promises because their loyalties lie with their cronies in secretive organizations such as ALEC, the Goldwater Institute, and the State Policy Network. These are highly organized groups, supported by big business and industry, special interest groups, and elected official, almost all Republican, that evangelize for conservative ideologies and policies.

Probably the most prolific is ALEC (American Legislative Exchange Council), which brings corporate and special interests, lobbyists, and politicians together in closed meetings, where bills are drafted to benefit corporations’ bottom line and conservative ideologies, without any public input. 11

Their “model bills” extend into almost all areas of American life. Their mission is to rewrite state laws that govern our rights. Legislative members are given bills dreamed up and written by corporations, industry groups and think tanks. The legislators pass them off as their own work, often word for word, thus making it difficult to hold the economically and politically powerful to account. Bill titles sound like they will protect the public when in truth they further corporate bottom lines or promote an ideological cause.

Lest you doubt this rather harsh statement, Tommy Thompson, a former U.S. senator and governor in Wisconsin, summed it up nicely when speaking to ALEC members in 2002. “Myself, I always loved going to [ALEC] meetings because I always found new ideas. Then I’d take them back to Wisconsin, disguise them a little bit, and declare that ‘It’s mine.’”  Nick Surgery, council for Common Cause, obtained a copy of Thompson’s speech. 12

A few examples of their work:

More of their efforts:

The following link is to the “ALEC 2019 Annual Meeting Attendee List.”13

WE ARE AT A CROSSROADS

We can look at these uncertain times as a turning point and expand our range of possibilities to promote democratic ideals. Or we can hang on to a failing system that threatens our democracy, where the wealthy and powerful are in control, the middle class continues to shrink, and the most vulnerable continue to be at risk.

Not only do we need to vote in the state and federal elections, we need to carry the electoral college to take back the White House. Remember the hanging chads, and Hillary carrying the popular vote by 3 million plus but losing? Every single vote is important.

Things can change for the better if we do our part, if every last one of us votes in November’s election. Iowa is fortunate to have many strong, qualified, and intelligent candidates for the House and Senate who see the current conservative leadership, state and federal, and their followers as a danger to our country. These candidates are committed to social and economic justice for everyone, taking care of the people’s business not the big donors.

Please do whatever you are able to support Democratic candidates, and please vote, either by mail (it’s very easy) or at the polls.

Julie Ann Neely is a longtime independent feminist/environmentalist/activist, now Democrat, who became politically active in retirement because she is worried about her grandchildren’s future and believes our democracy is in danger.

Top photo: Crawford County Memorial Hospital in Denison, Iowa. According to the state’s coronavirus website on June 7, Crawford County had 573 confirmed COVID-19 cases and the second-highest per capita infection rate of Iowa’s 99 counties. Approximately 3.3 percent of the county’s residents have tested positive.