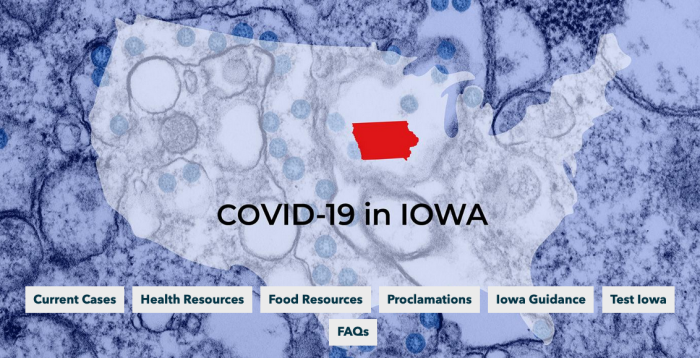 “I am embarrassed and saddened by the way the media has been treated during COVID,” Polly Carver-Kimm wrote in an email to the Des Moines Register on July 15. “You are not receiving timely answers and you are getting scripted talking points when you do get an answer.”

Carver-Kimm discussed the state’s handling of press inquiries hours after being shown the door as communications director for the Iowa Department of Public Health.

Carver-Kimm joined the department twelve years ago and had “guided IDPH’s risk communications” during several infectious disease outbreaks: novel influenza A (H1N1) in 2009, Cyclospora in 2012, and Ebola virus in 2014. For years, I’d found her to be helpful and easier to deal with than many state government press contacts.

That seems to have caused trouble for her with her superiors. Tony Leys reported for the Register that IDPH Director Gerd Clabaugh told Carver-Kimm her position was being eliminated in a restructuring, and “she could either resign or be fired.”

But she said she believes her ouster was at least partly tied to her desire to aggressively fulfill reporters’ requests for information. “I tried really hard to be as open as we legally can be,” she said.

Carver-Kimm said she was told in late March that she would no longer handle any media inquiries about the coronavirus, but that she would be helping county health departments inform the public about it. She said she later was taken off that duty, too.

I wondered why the department suddenly started directing COVID-19 related press inquiries to Amy McCoy in March. She’s not nearly as responsive. In fairness to McCoy, it sounds like her hands may be tied. Carver-Kimm told Leys,

[Governor Kim] Reynolds’ staff has recently required most media requests, including routine open-records requests, be funneled through the governor’s office. “I have never had something like that happen before in any of the administrations I’ve worked for,” she said.

Carver-Kimm joined IDPH when Chet Culver was governor and led the department’s communications during Terry Branstad’s six-and-a-half years back in office.

Reynolds’ staff have rarely been speedy to process public records requests, even in the best of times. It’s worse now; I’ve been waiting for more than two and a half months for some COVID-19 related records I requested.

The IDPH has also flouted Iowa’s open records law by trying to charge outrageous fees for documents related to the pandemic. Ryan Foley of the Associated Press said that when he sought details on how many Iowa meatpacking plant employees had died of the virus–a figure IDPH must track closely–the department tried to charge him $1,690.

Clark Kauffman of Iowa Capital Dispatch reported on July 14 that he had requested two months of email communications between State Medical Director Dr. Caitlin Pedati and certain state or federal officials. The IDPH told him the email search would cost $8,006.07, and the labor cost for compiling and reviewing some 9,340 relevant emails would cost an additional $9,893.68. UPDATE: Kauffman reported on July 16 that the department said the total cost would be $9,893, with no additional charge for the email search.

Caroline Cummings of the Sinclair Broadcast Group requested about two and a half months of email correspondence, for which IDPH tried to charge her $9,800.

Journalists aren’t the only people having trouble getting information about the pandemic’s impact here. Although infections in food processing plants have fueled rapid community spread in more than a dozen Iowa counties, the IDPH did not provide data for a recent U.S. Centers for Disease Control study on “COVID-19 outbreaks among meat and poultry processing facility workers.”

Don’t expect the flow of information about COVID-19 to improve when Clabaugh retires at the end of July. Reynolds doesn’t plan to appoint a successor at IDPH anytime soon. Rather, Iowa Department of Human Services Director Kelly Garcia will run both departments. For years, the Iowa DHS has been notorious for slow-walking public records requests and other media inquiries, prompting reporters to file multiple complaints with Iowa’s Public Information Board.

“I have sensed that something was coming for several months now because I was just consistently relieved of duties and it started back in March not long after we had our first case of COVID-19,” Carver-Kimm said, “and at that time then I was told that I wouldn’t be handling media inquiries anymore.”

Carver-Kimm indicated her other job duties that related to COVID-19 were gradually eliminated, then, about a month ago, Carver-Kimm was removed from her role as the officer in the agency who fulfilled public records requests from the media. […]

“We can share the following: Transparency is critical in our response to the COVID-19 pandemic,” McCoy said. “The Iowa Department of Public Health has gone above and beyond to provide up-to-date and comprehensive information throughout the pandemic. These efforts have included participating in regular press briefings, constant communication with media and continuous improvement on how we report data and provide information. We value the role media plays in the state’s efforts to get information to the public, and intend to continue a strong partnership.”