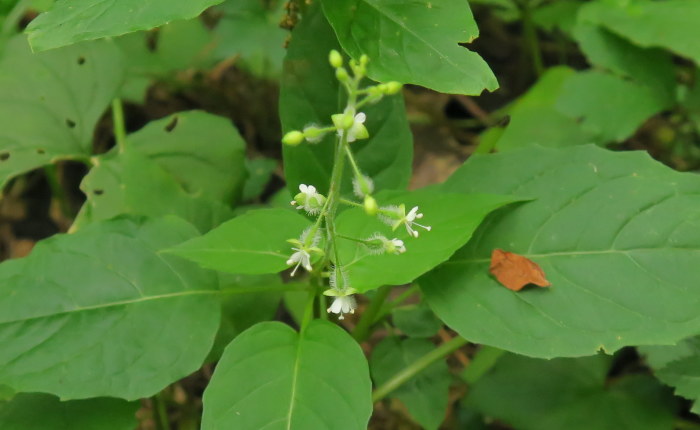 Some wildflowers are show-stoppers, while others are easily overlooked. A small colony of Enchanter's nightshade (Circaea lutetiana) has been growing near my home for many years, but I hardly noticed its blossoms until relatively recently. I learned to identify this plant just last fall, thanks to Leland Searles, a walking encyclopedia of Iowa flora.

Sometimes known as Broadleaf enchanter's nightshade, this plant is native to most of the U.S. and Canada. If you spend time on wooded trails in the summer, you may have passed it many times without noticing. The plants are only one to two feet tall, and their flowers are tiny, one-eighth to one-fourth inch in diameter.

Enchanter's nightshade thrives in dappled sunlight or shade. The Illinois Wildflowers website notes, "This is one of the woodland wildflowers that blooms during the summer in shaded areas. The flowers of such species are usually small, white, and not very showy." The same site speculates, "This plant may be less abundant than in the past because of browsing by deer."

I took most of the pictures enclosed below in Windsor Heights during the first week of July.

As always, the Illinois Wildflowers and Minnesota Wildflowers websites are good resources for botanically accurate descriptions of the foliage, flowers, and fruit of enchanter's nightshade.

Near the top of this frame, a plant that isn't blooming yet. Just below, a plant with flowers as well as buds yet to open. 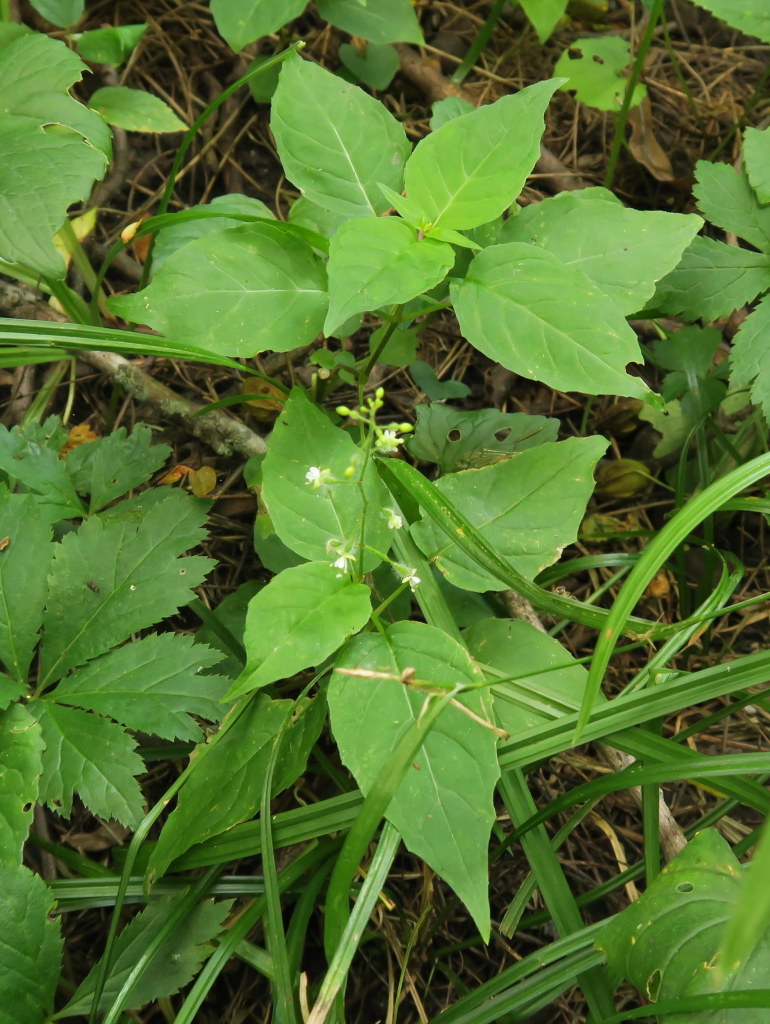 Enchanter's nightshade flowers near the bottom of the stalk bloom first. The buds near the top are the last to open. 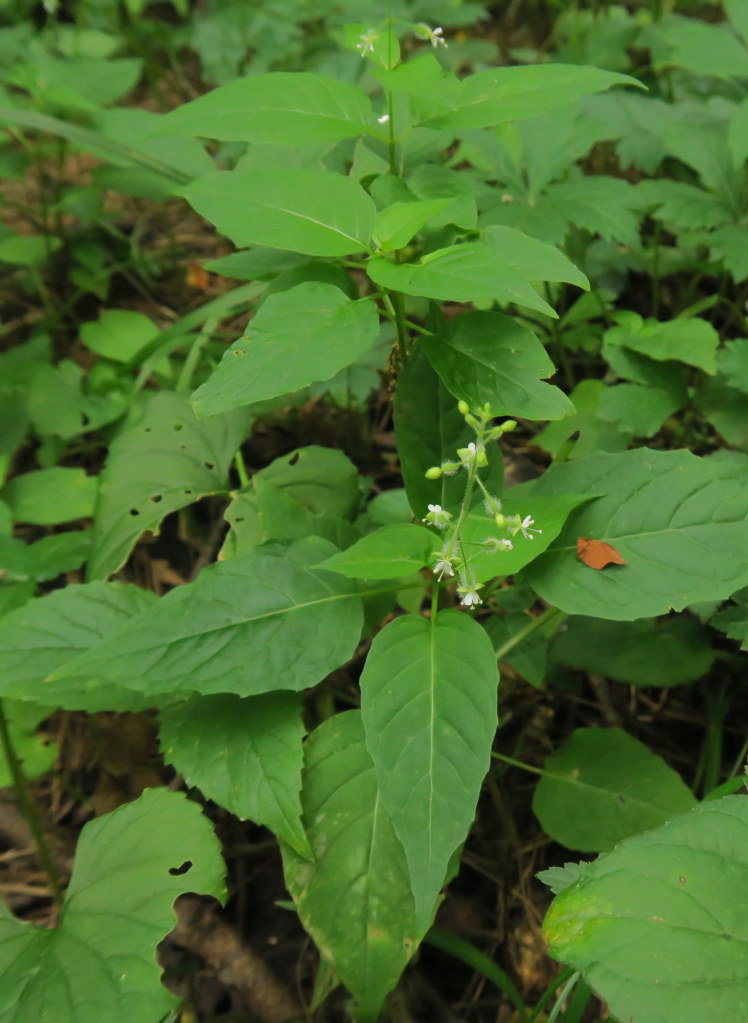 A couple of closer looks at the flowers: 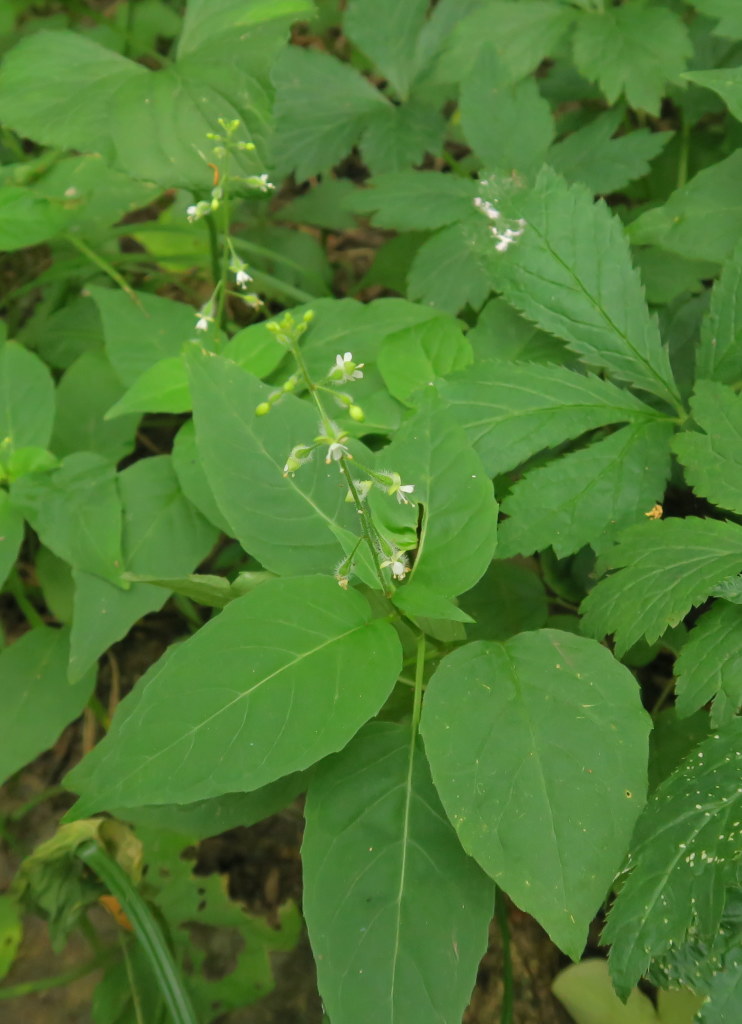 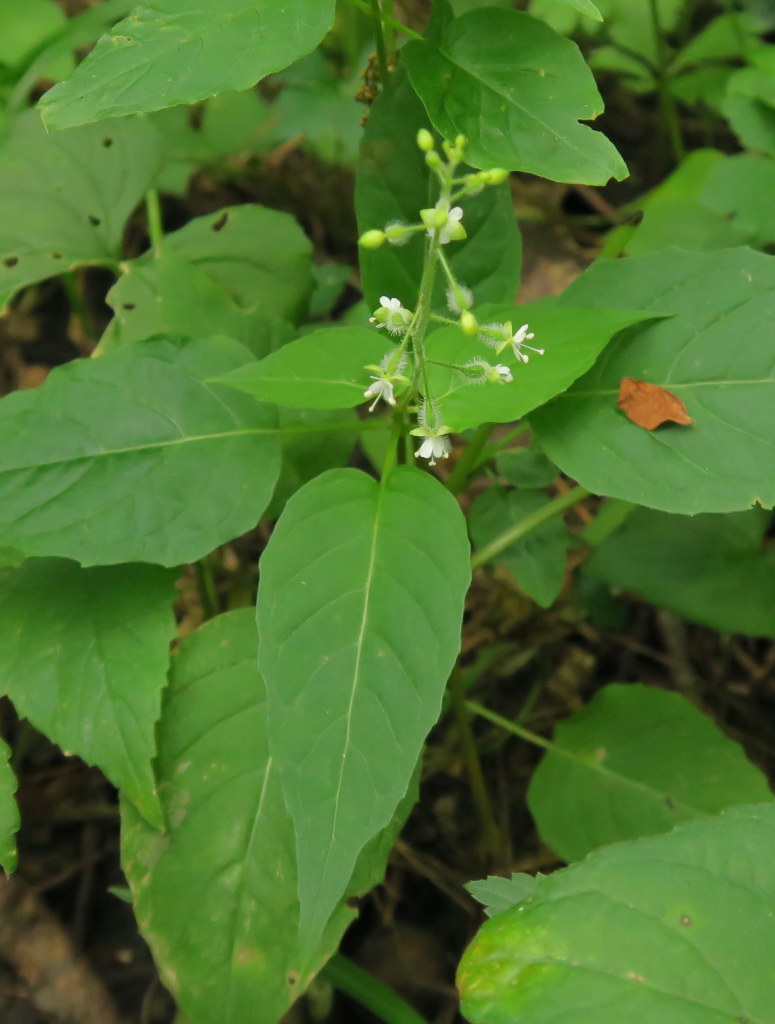 Much of the foliage in this shot that's not enchanter's nightshade is common black snakeroot, which tends to bloom earlier in the summer. Near the top of the frame you can see a few heart-shaped violet leaves. 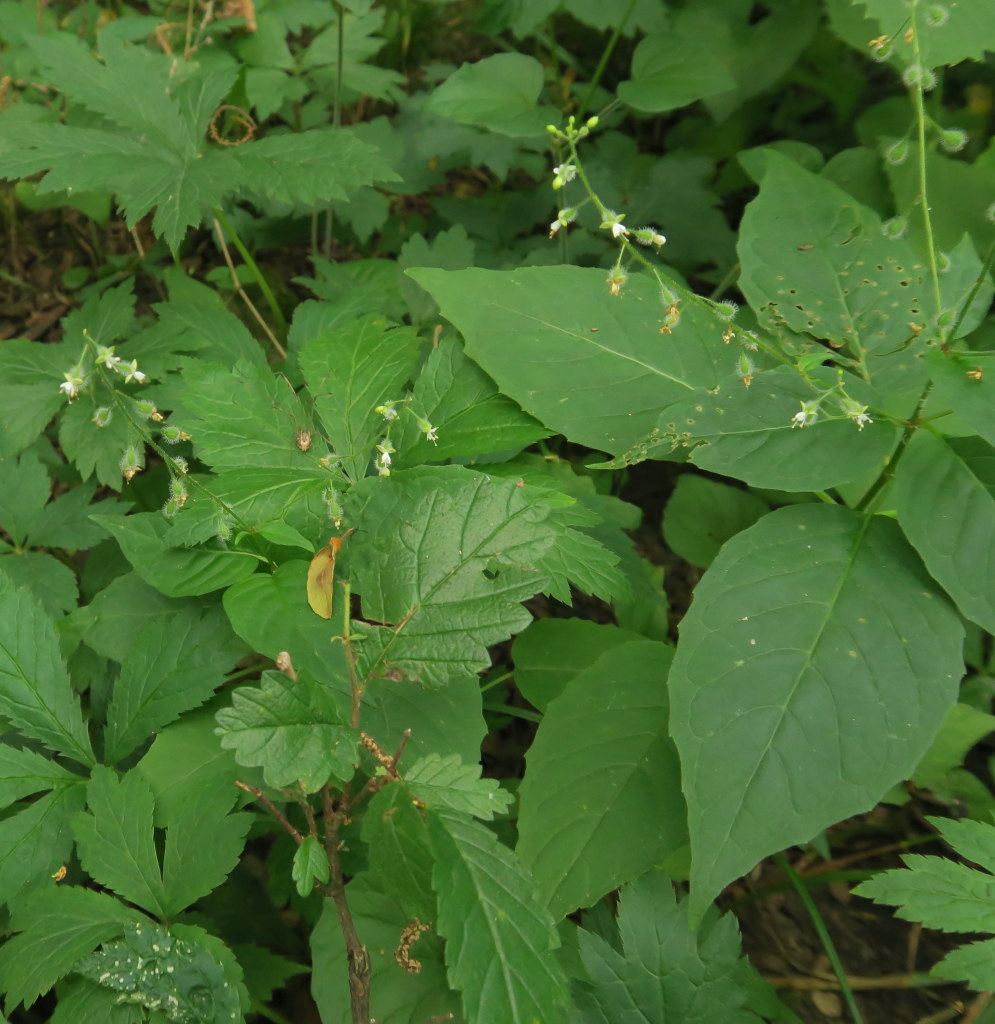 Minnesota Wildflowers describes the fruit of enchanter's nightshade this way: "a small, teardrop shaped, 2-chambered capsule densely covered in hooked hairs that grab onto anything that passes by." You can see those capsules forming where the first flowers to bloom on this plant have already lost their petals. 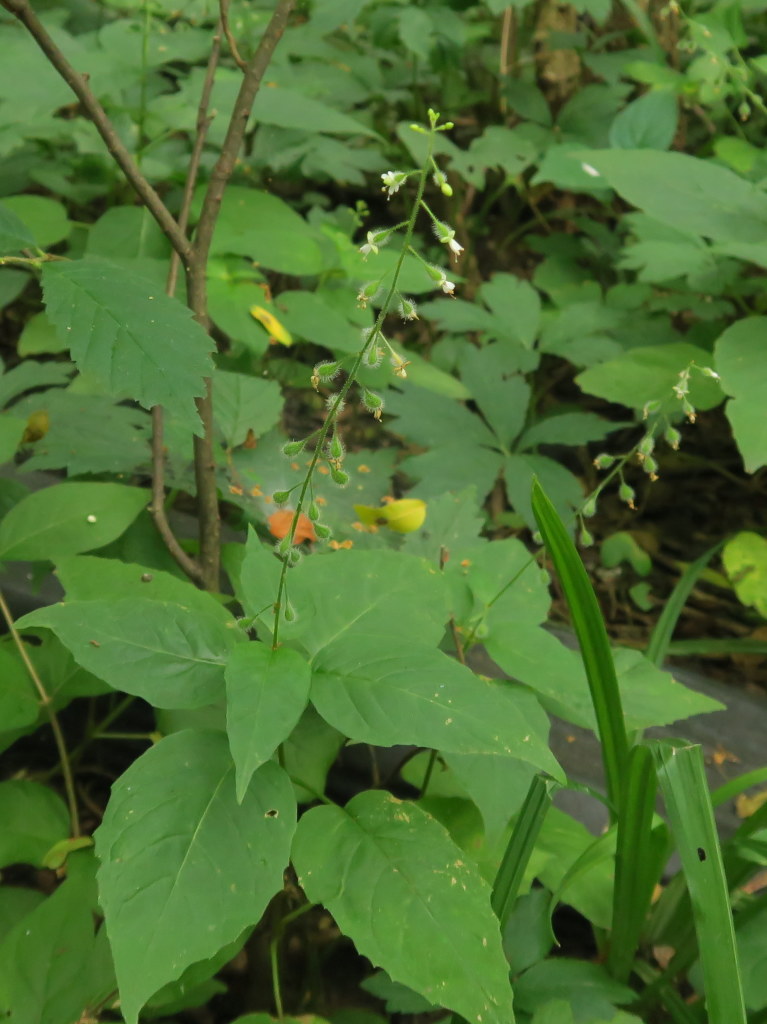 I included this photo of enchanter's nightshade in last autumn's post about plants with sticky burs. The leaves look a bit worse for wear; according to Illinois Wildflowers, caterpillars of the Enchanter's Cosmet moth "are blotch leaf-miners." 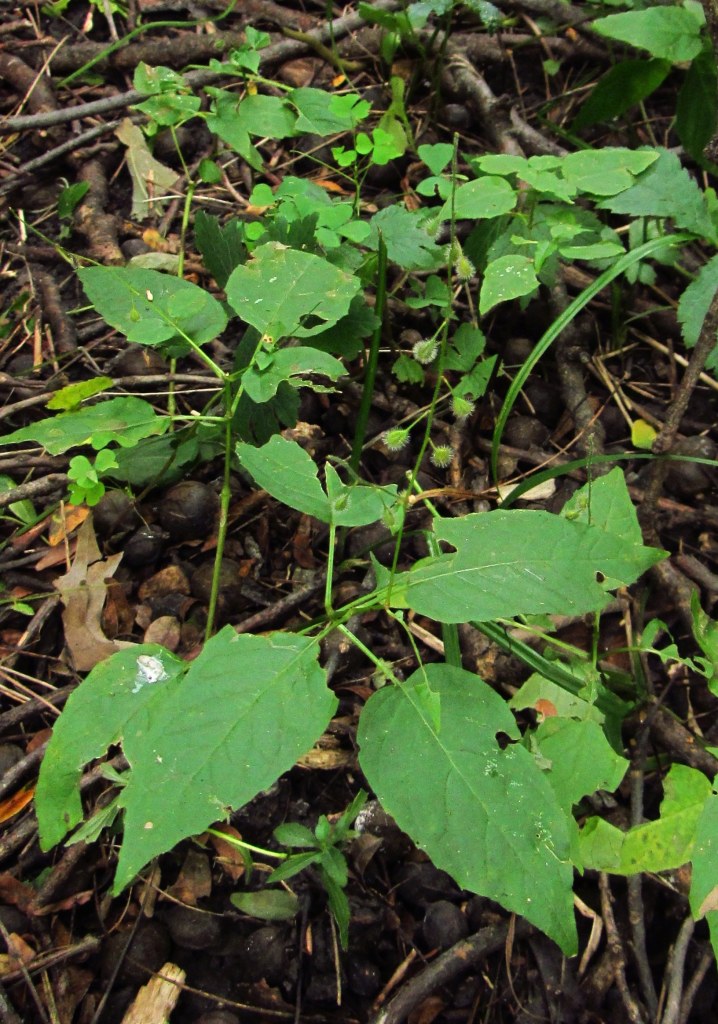