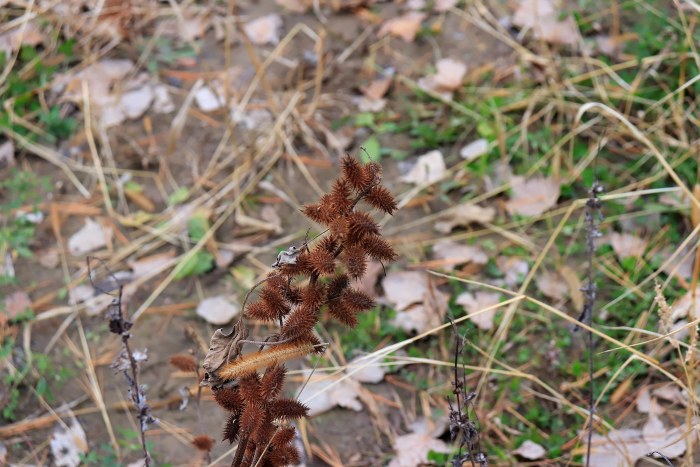 Some wildflowers are nice to look at while blooming but can be a nuisance later, due to one of nature’s effective seed dispersal methods.

Botanically speaking, a bur is a “seed or dry fruit or infructescence that has hooks or teeth.” While they “tend to repel some herbivores,” we mainly notice their other function: hitching a ride on fur or clothing to spread seeds.

When I mentioned that I was planning this compilation, Mike Delaney observed that it would be helpful to make people aware, since burs “can ruin a good wool sweater” and cause problems for dogs.

Let’s start with a common woodland species across Iowa, Virginia stickseed (Hackelia virginiana). The tiny white flowers, visible in the first photo, are easily overlooked. But you won’t miss the burs if they get stuck to you. 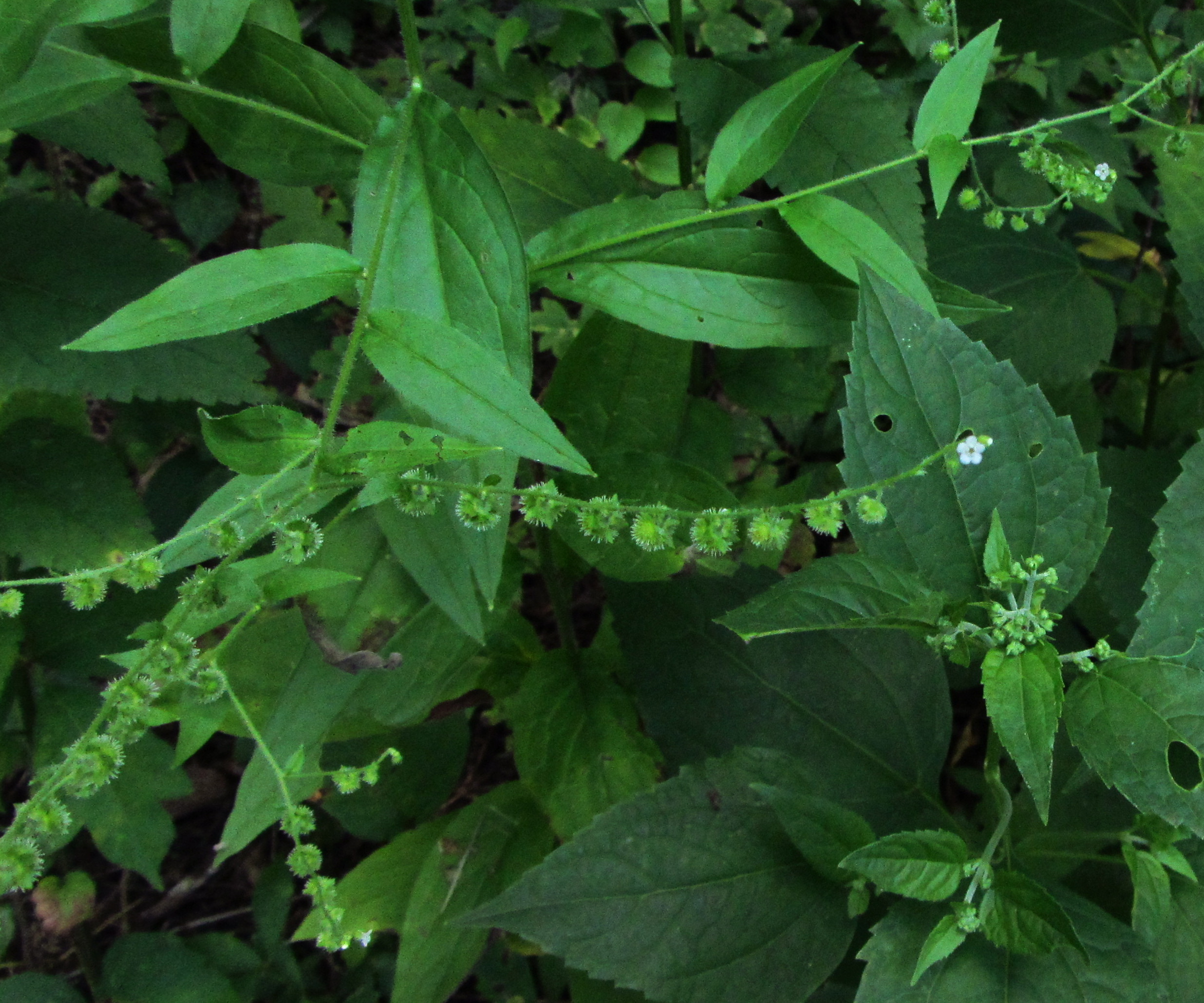 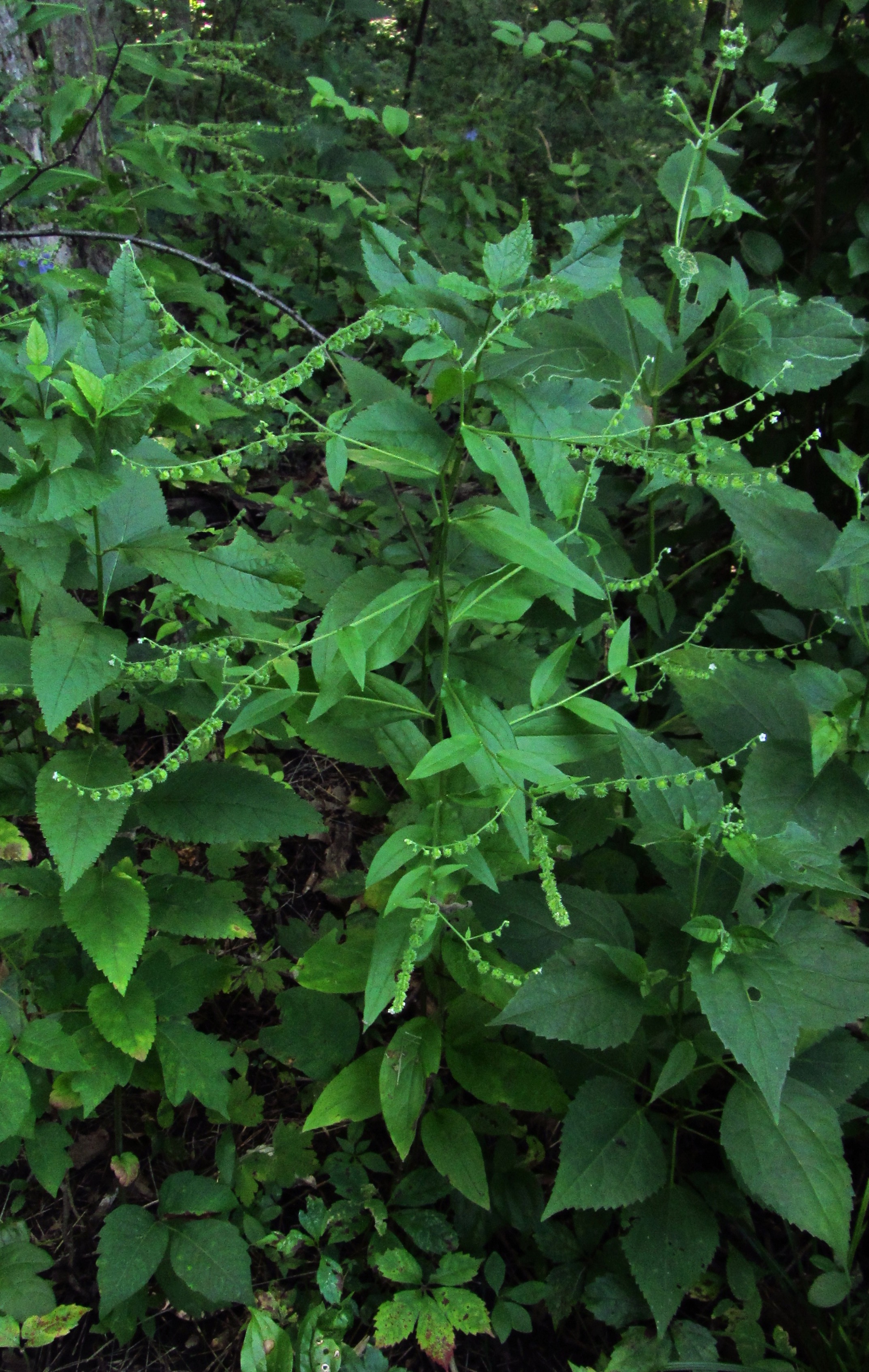 Virginia stickseed may be the most intensely disliked of all Iowa plants that develop burs, judging by comments under photos I shared in the Iowa Wildflower Report Facebook group.

Virginia stickseed can form colonies, like the plants surrounding white snakeroot and woodland lettuce flowers in this shot. 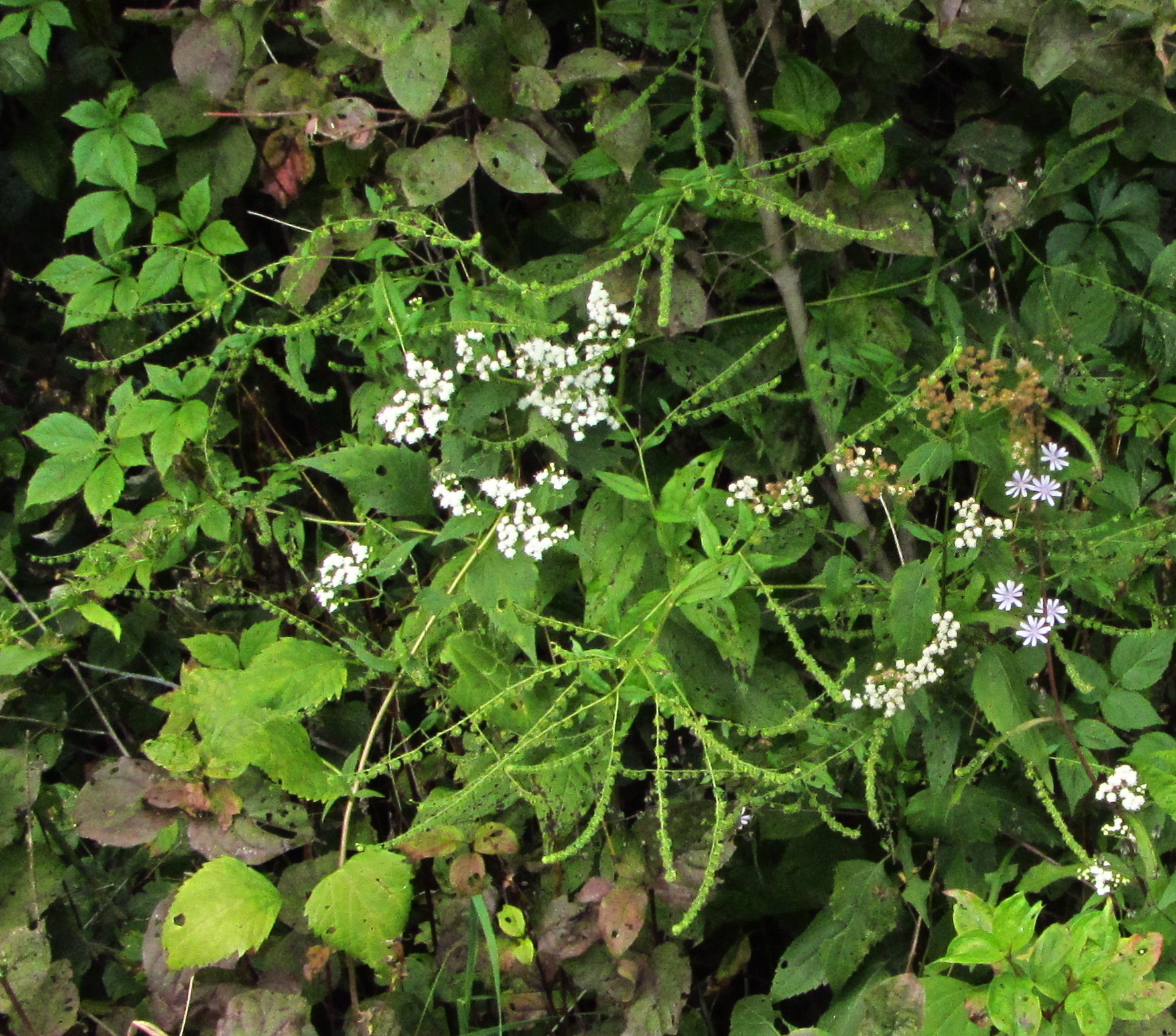 Lora Conrad shared this picture of her afflicted collie, Logan. 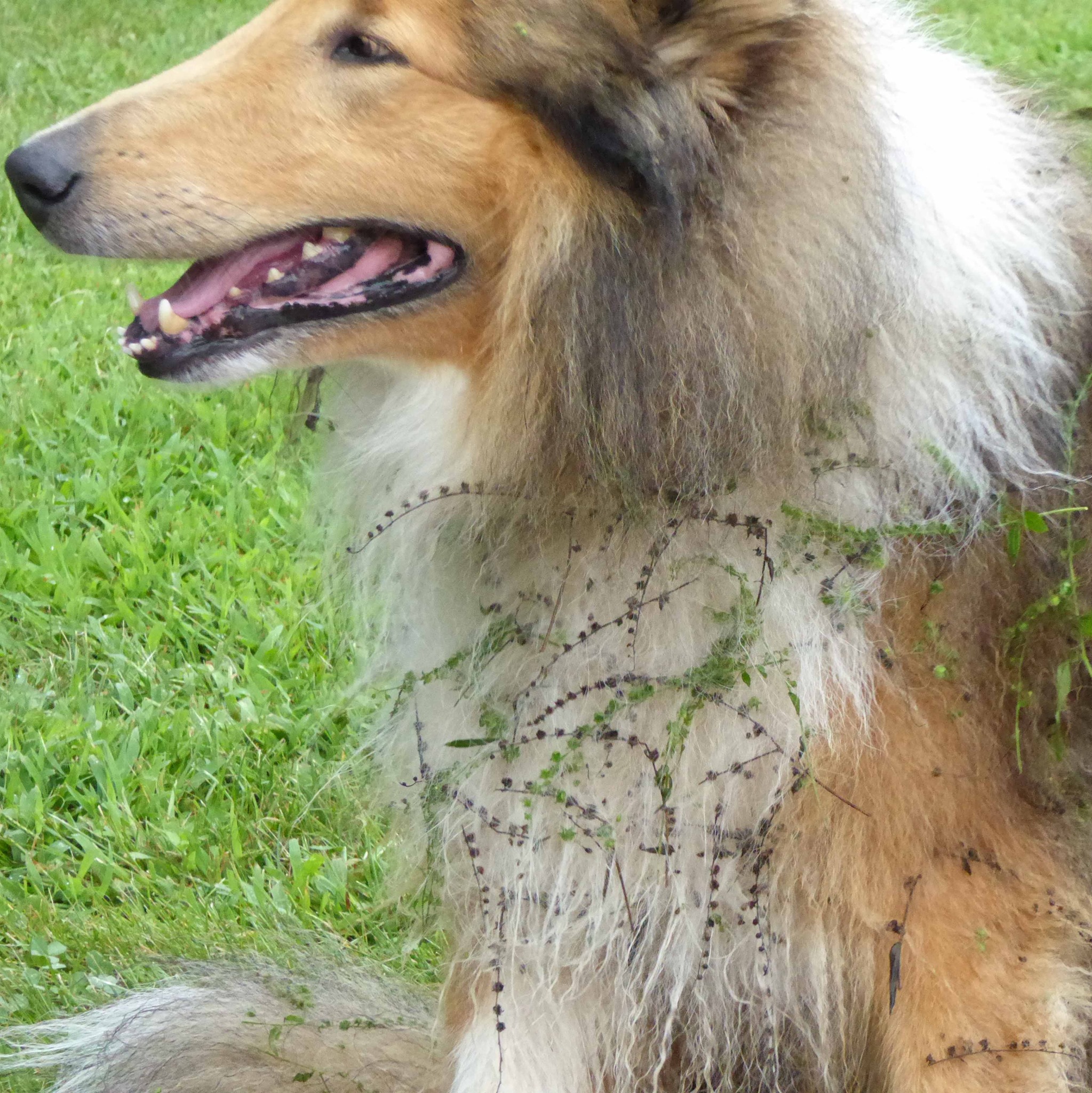 She commented that stickseed is

a near daily occurrence in mid-August until maybe the end of October. First all green ones then on to the brown dried ones. If caught immediately, many can be pulled off the surface by hand. If not noticed right then, they work their way deeper and more and more into Logan’s long long collie hair–and then, yes–its hard on him and me–requiring careful holding of bits of hair to prevent pulling and use of a fine comb. Unlike animals with shorter hair, even using a detangler product, because it wets the hair, makes it harder to remove.

Wendie Schneider observed, “They are especially sticky on ear fur.” Her photograph of her poor dog: 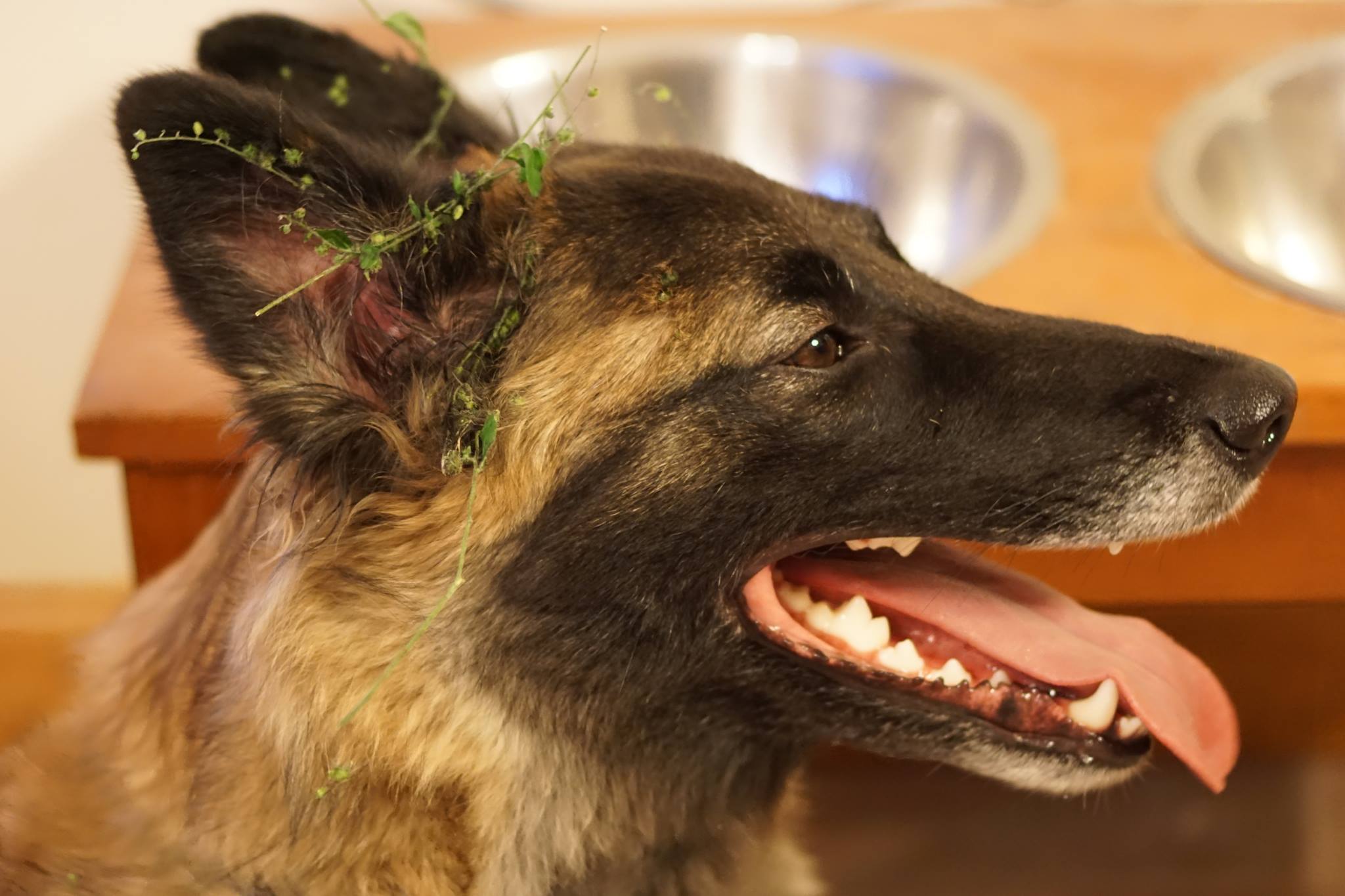 White avens (Geum canadense) is another prevalent plant in the Iowa woods. In this picture from July 2018, some of the small white flowers are near their peak, while others are developing into the bur-like fruit. 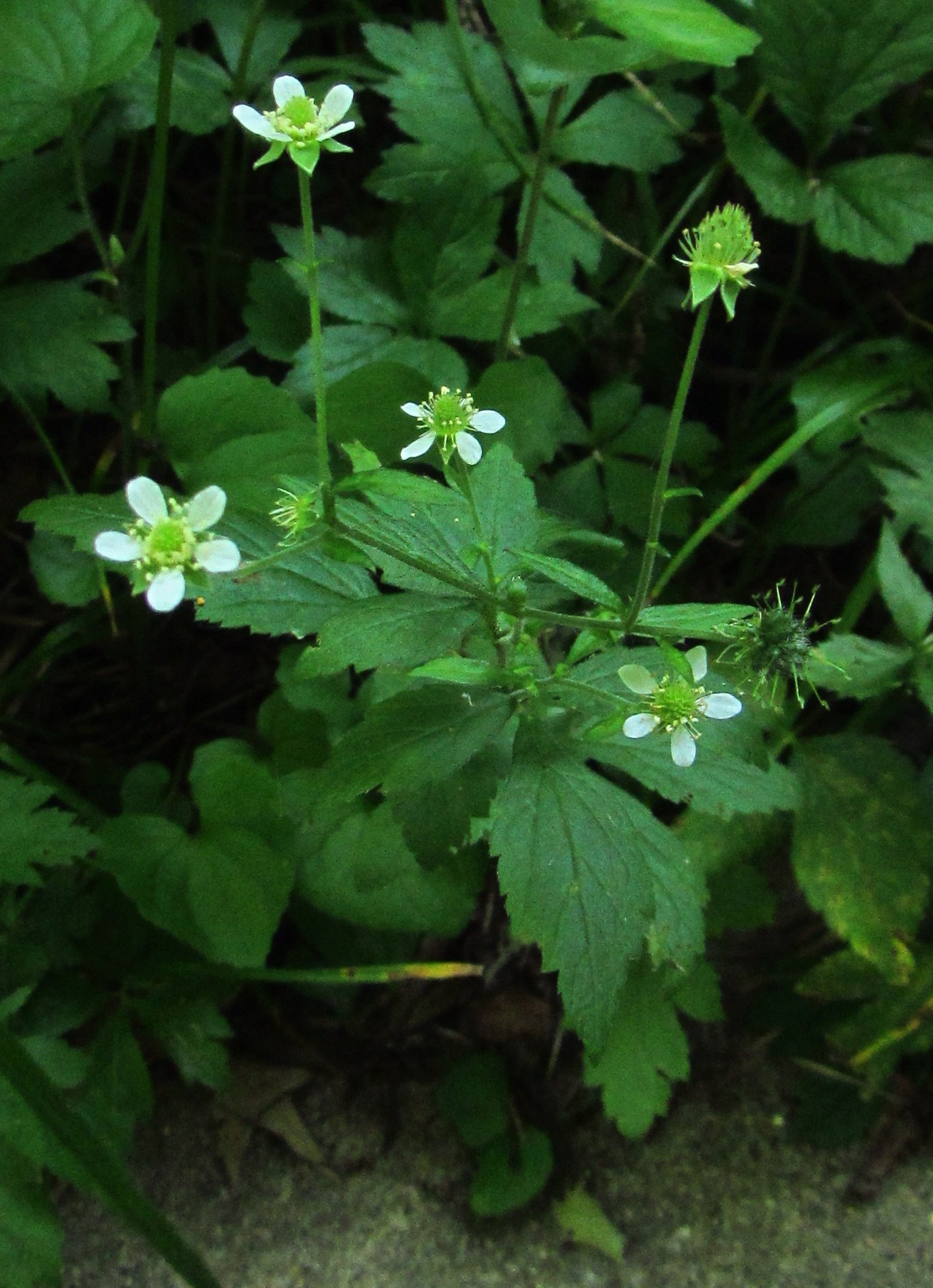 Burs outnumber the flowers on the white avens plants in this shot from July 2014. (Some meadow rue plants that have finished blooming are in the background.) 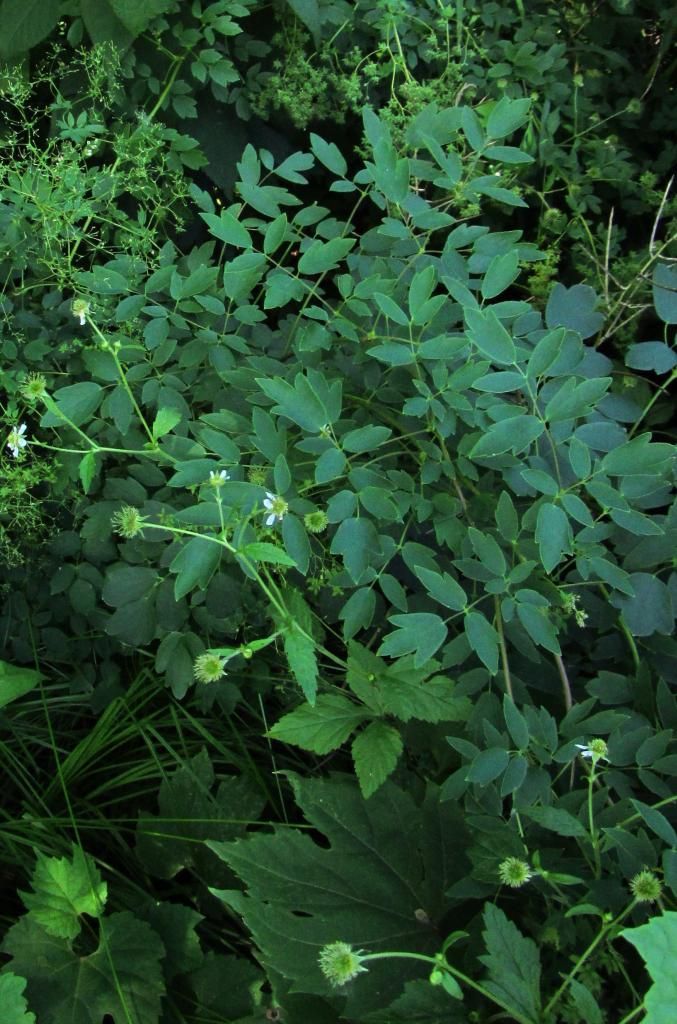 Lora Conrad captured this white avens plant in August of this year. You can see tufts of collie Logan’s hair. 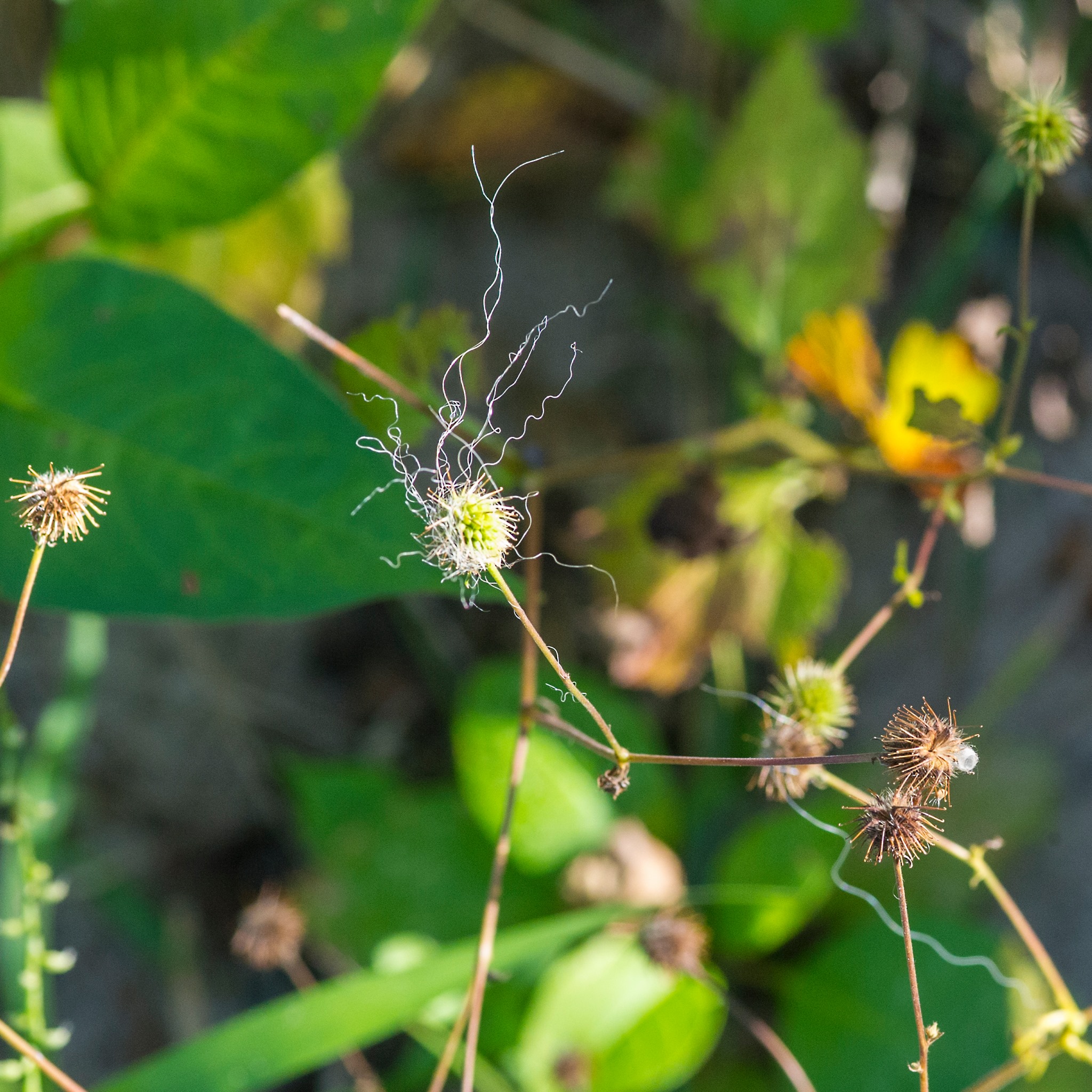 This unobtrusive woodland plant was growing just steps from my Windsor Heights home, but I never knew its name before this year. Ecologist and photographer Leland Searles made the ID: “From the widely spaced, fuzzy pods on the stalk and the opposite leaves below, this is Enchanter’s Nightshade, Circaea lutetiana.” 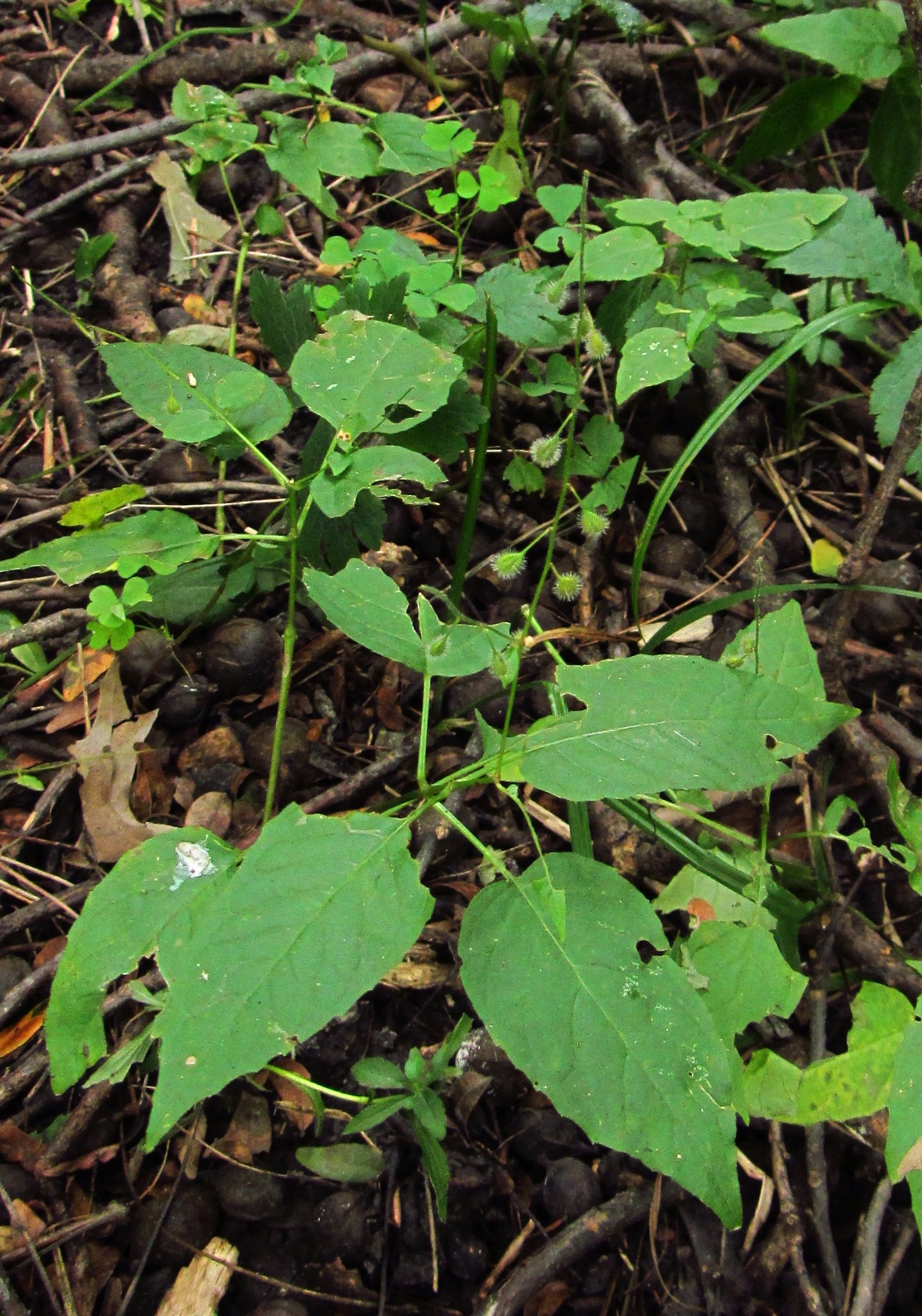 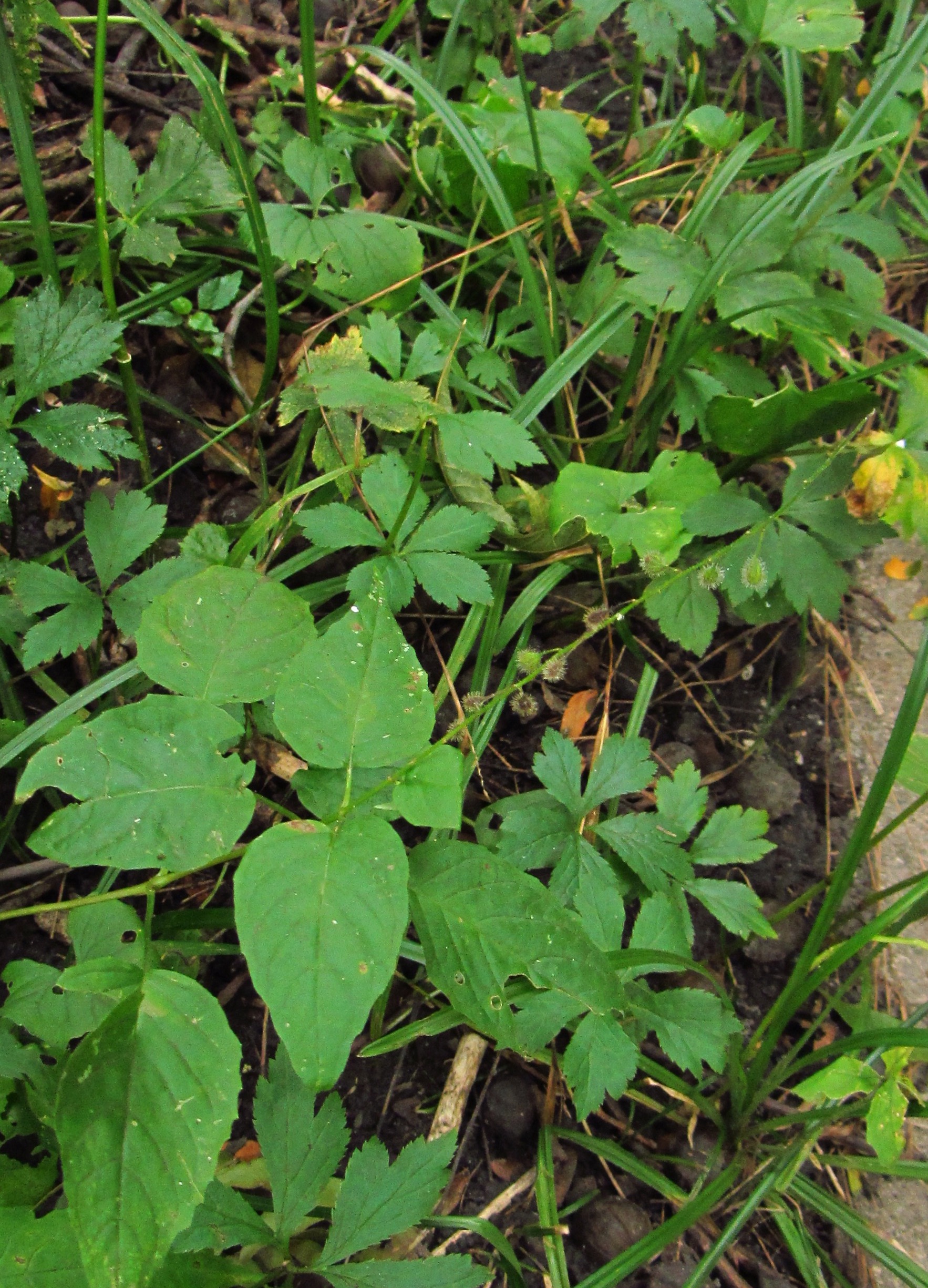 Common black snakeroot (Sanicula odorata) is widespread in woodland habitats too. I find it hard to photograph this plant’s burs against a mostly-green background, but they stand out here, thanks to our front sidewalk. One of the flowers is still blooming closer to the center of the picture, just above some leaves. 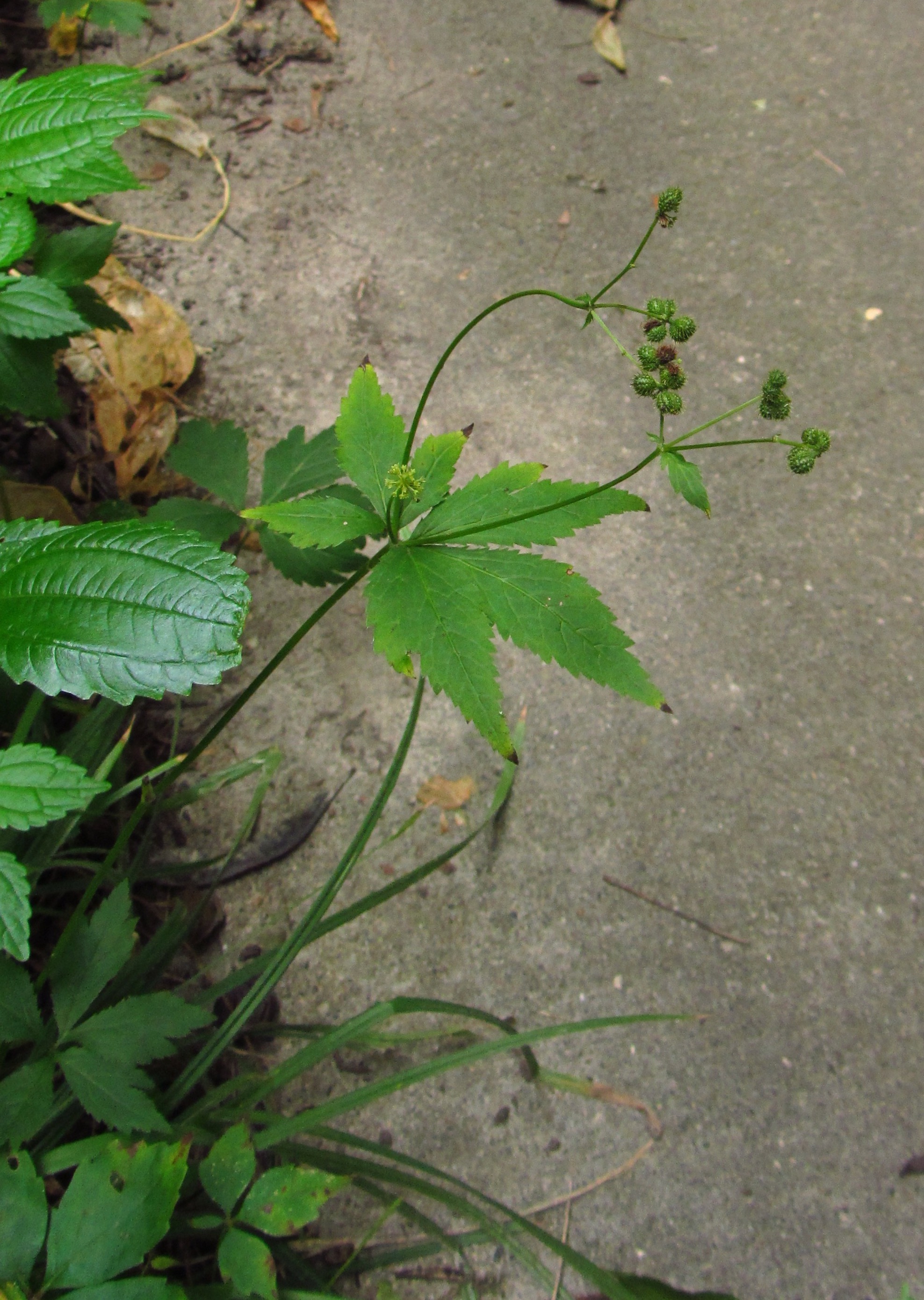 Some common black snakeroot burs are resting against a shiny clearweed leaf. 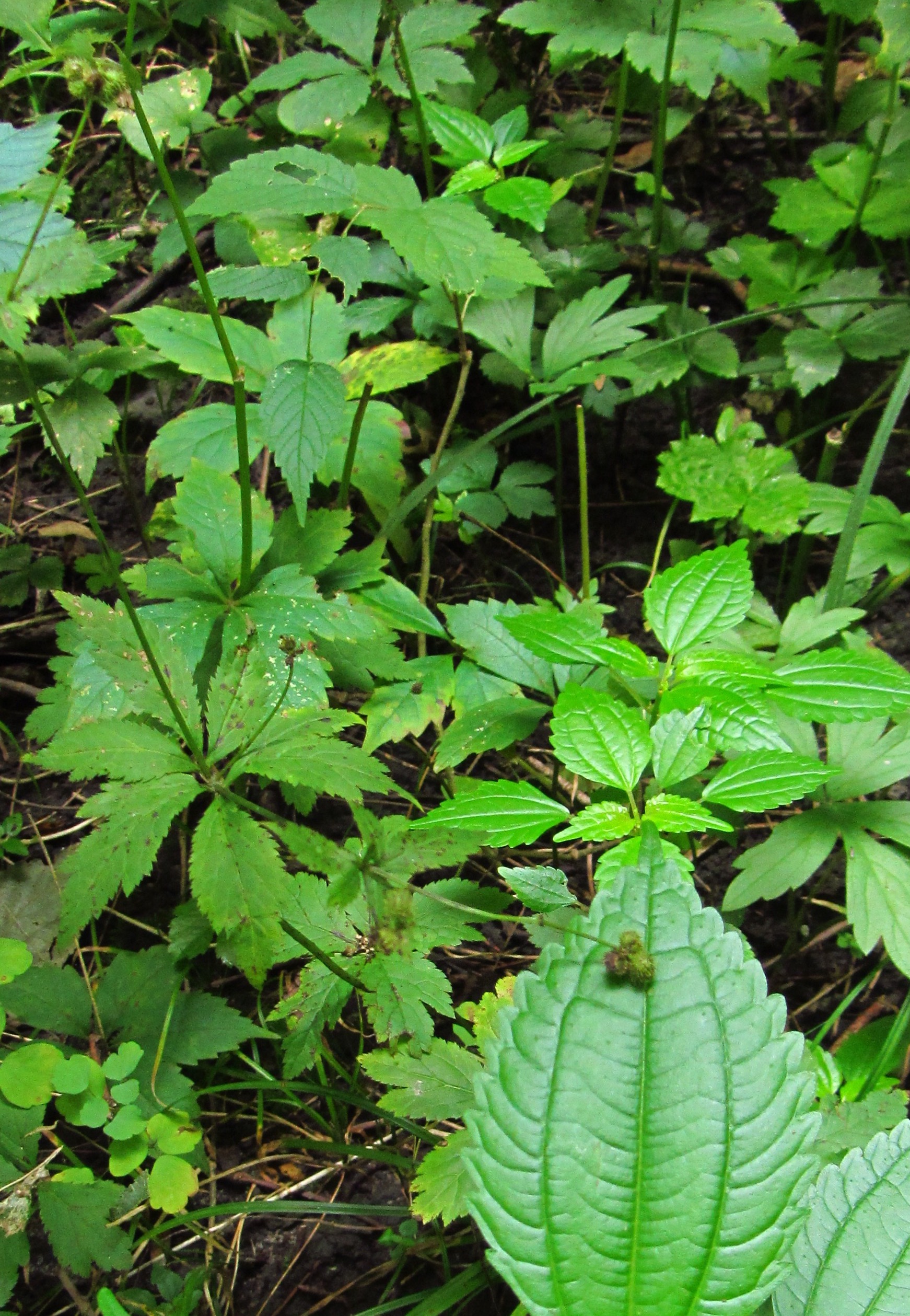 The pointed-leaf tick trefoil (Desmodium glutinosum) flowers capture your attention in this picture from July 2016, but common black snakeroot leaves and burs are visible to the left. 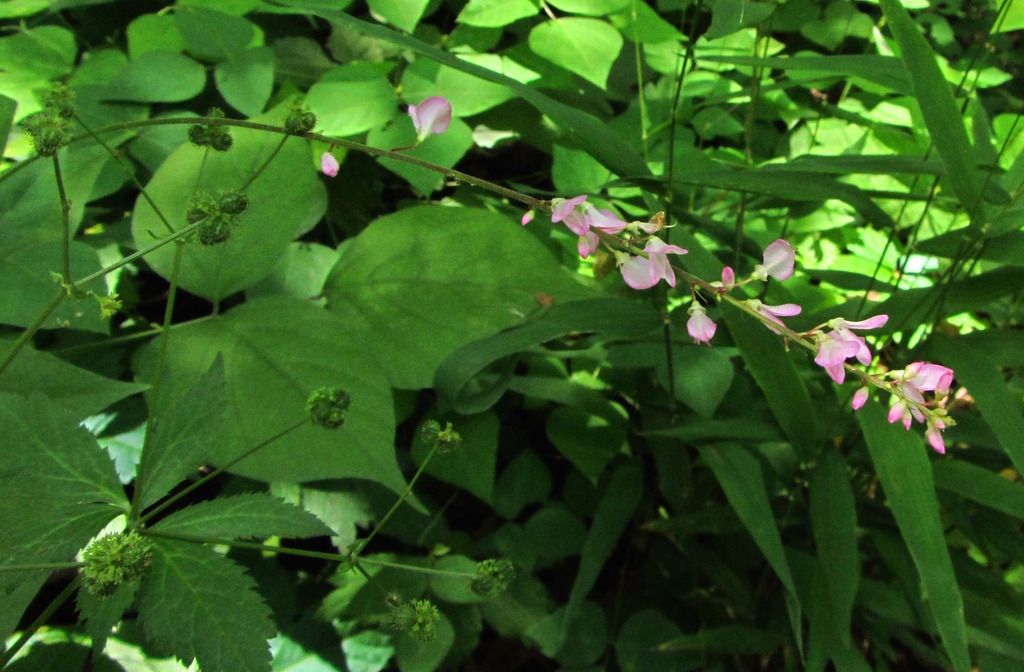 Moving on to the tick trefoils, those plants are commonly known as “beggar’s lice” or “stick tight” because of their sticky fruit.

Don Weiss gave me permission to publish his photograph of burs on a pointed-leaf tick trefoil plant. 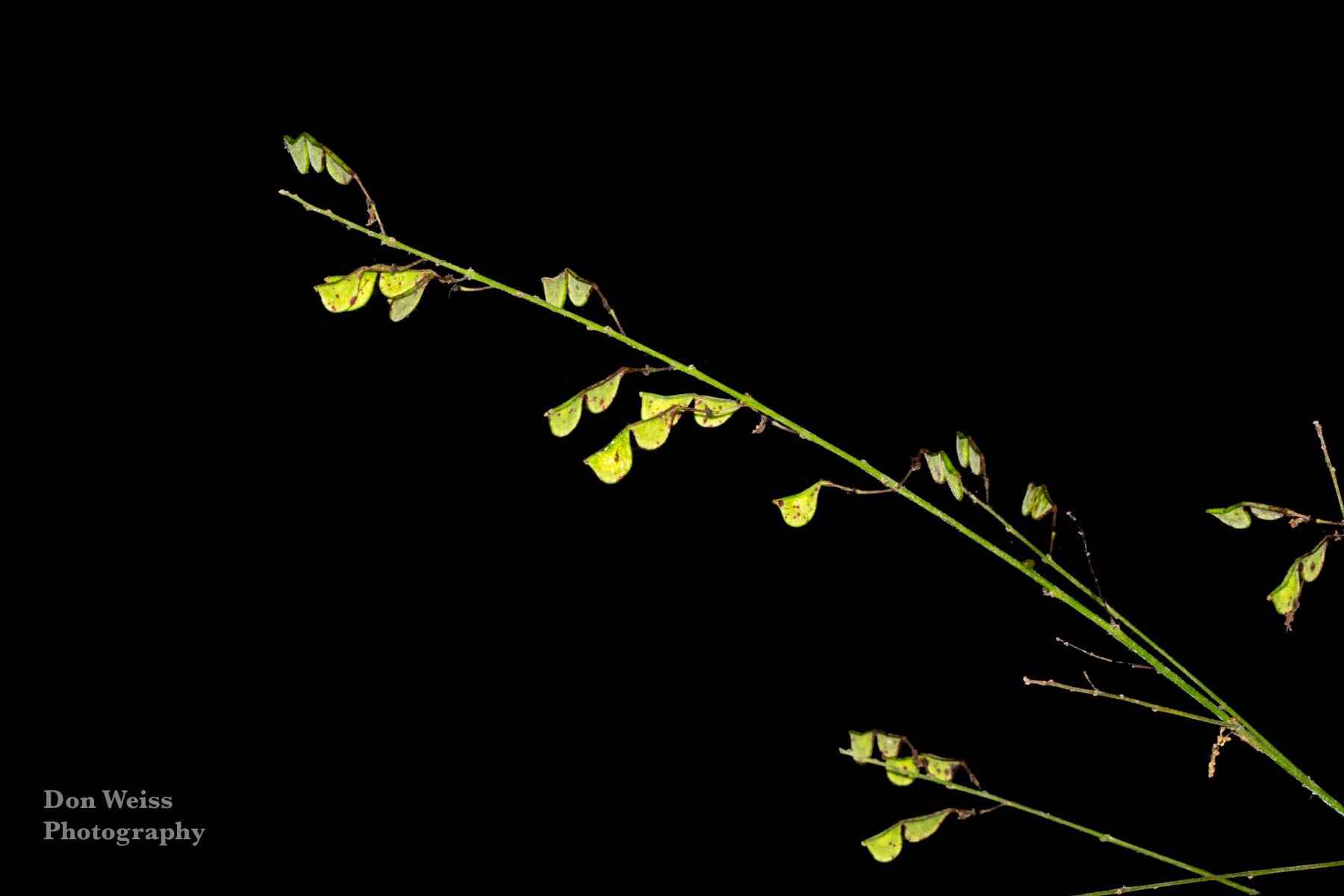 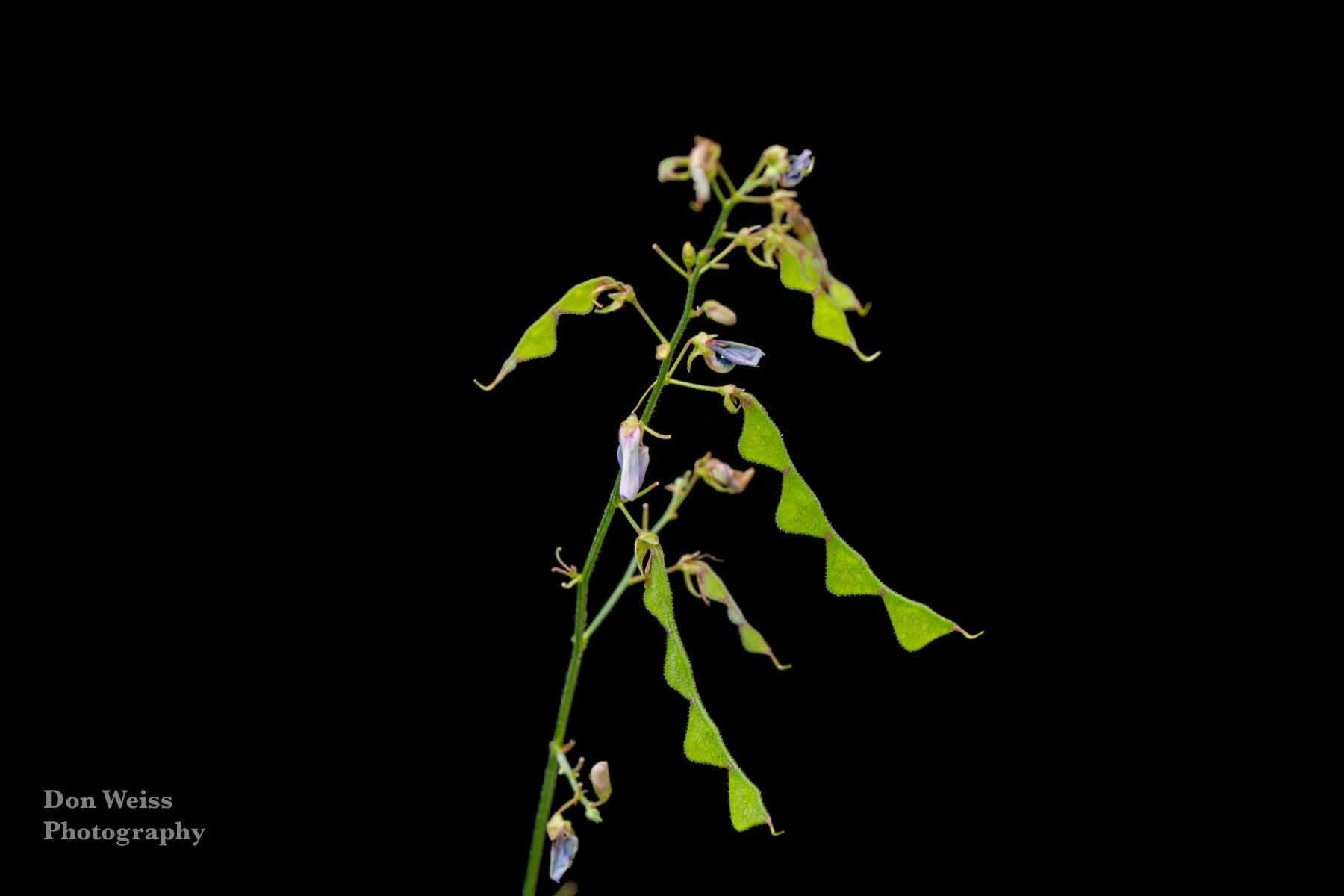 Lora Conrad captured a showy tick trefoil plant with some late flowers as well as burs. 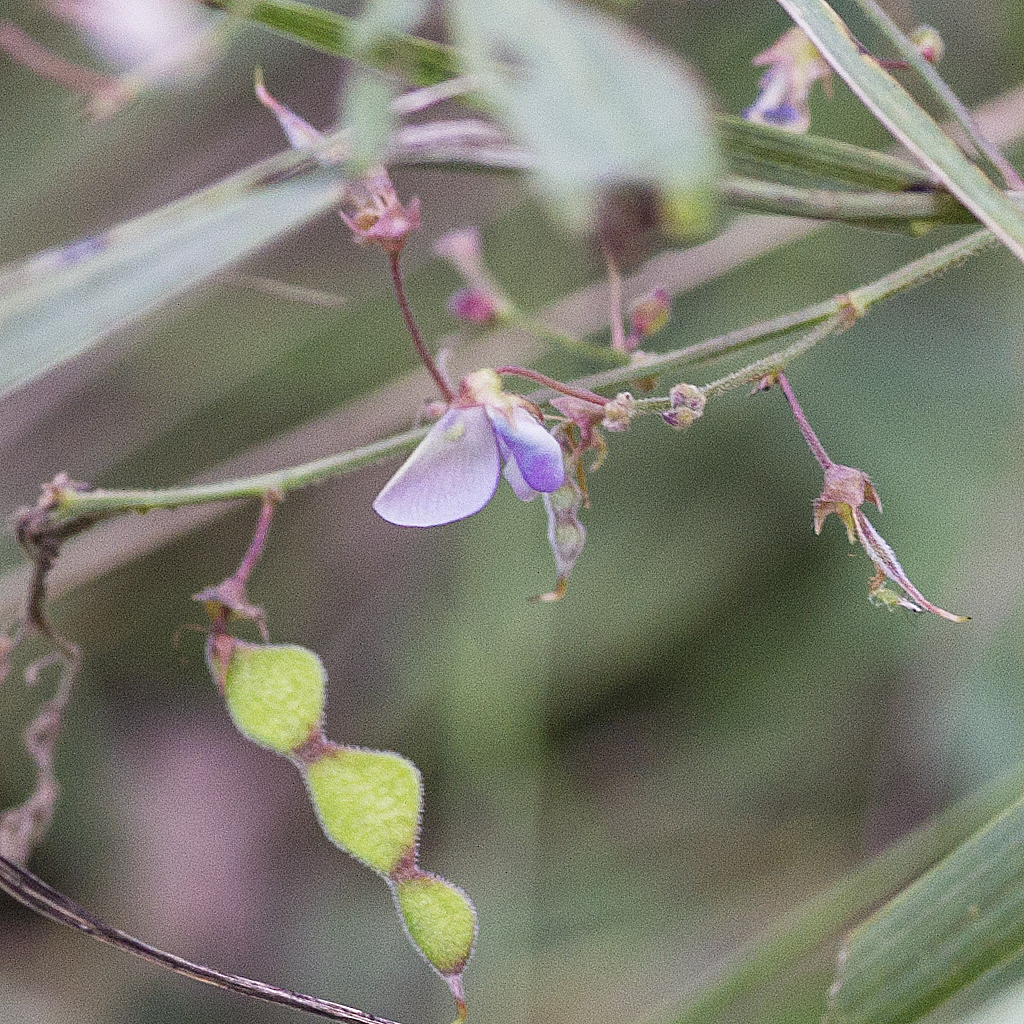 While visiting the Neal Smith National Wildlife Refuge earlier this month, I leaned in from a walking path to take a picture of a late-blooming partridge pea. Some tick trefoil pods seized the opportunity my fleece jacket presented. 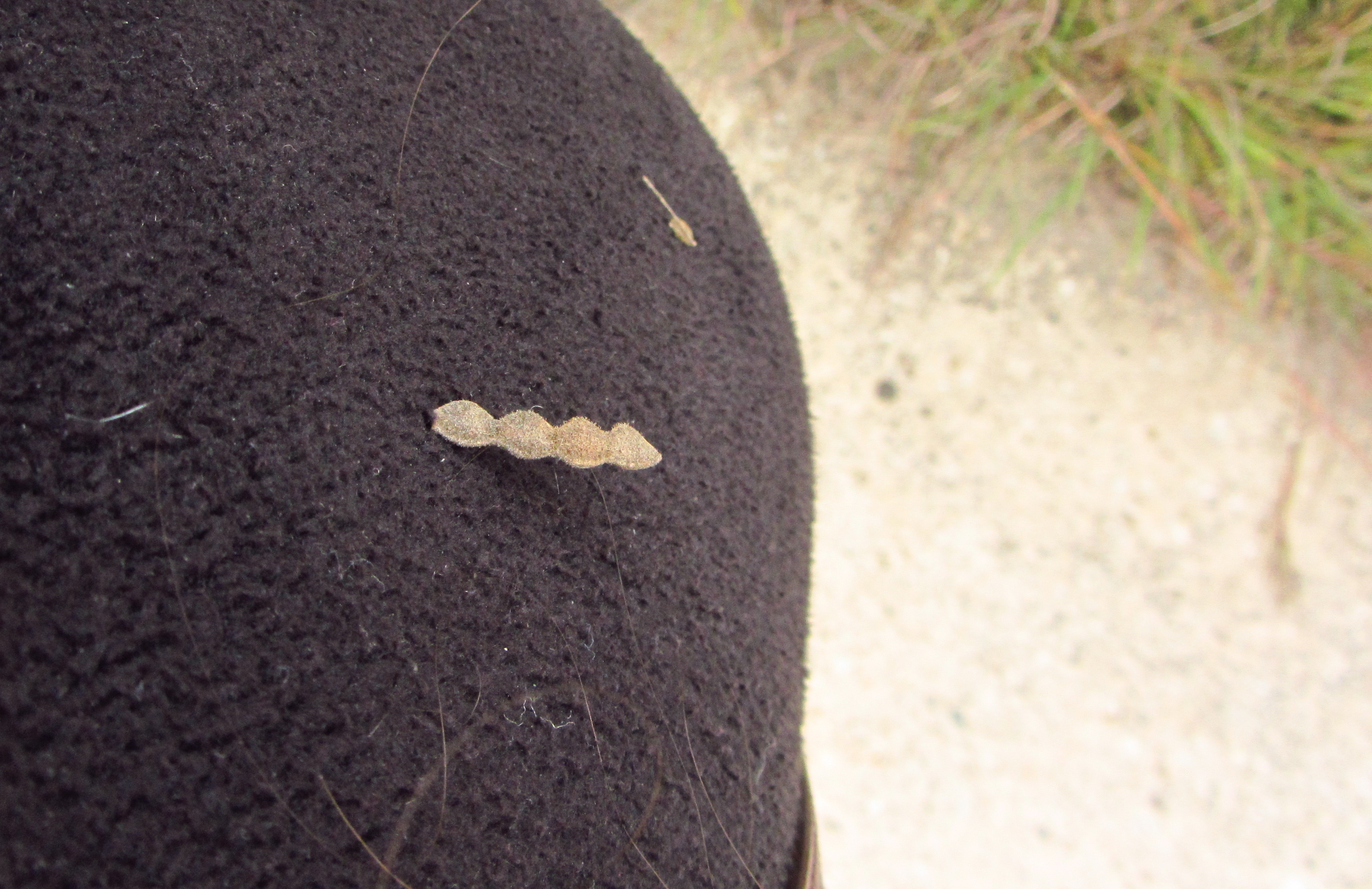 Whereas tick trefoils are usually a minor annoyance, some burs are genuinely painful when encountered. Randy Haugen shared his photograph of the native common cocklebur (Xanthium strumarium), noting, “These are really hard to get off of a Husky.” 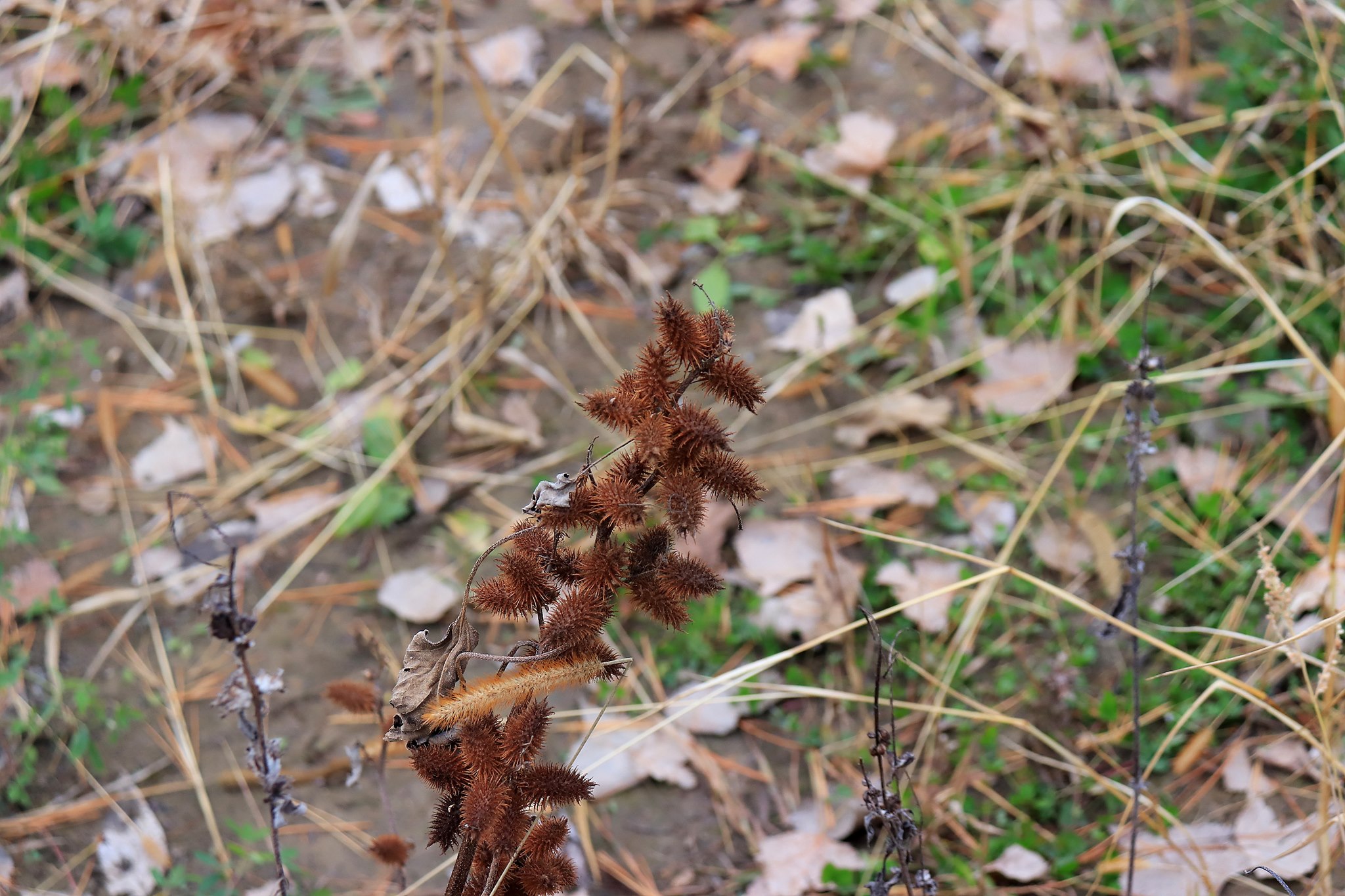 Buffalo bur nightshade (Solanum rostratumum) is a non-native that thrives on disturbed ground. Keep your distance when looking at the large yellow flowers: the stems are prickly well before the burs develop. 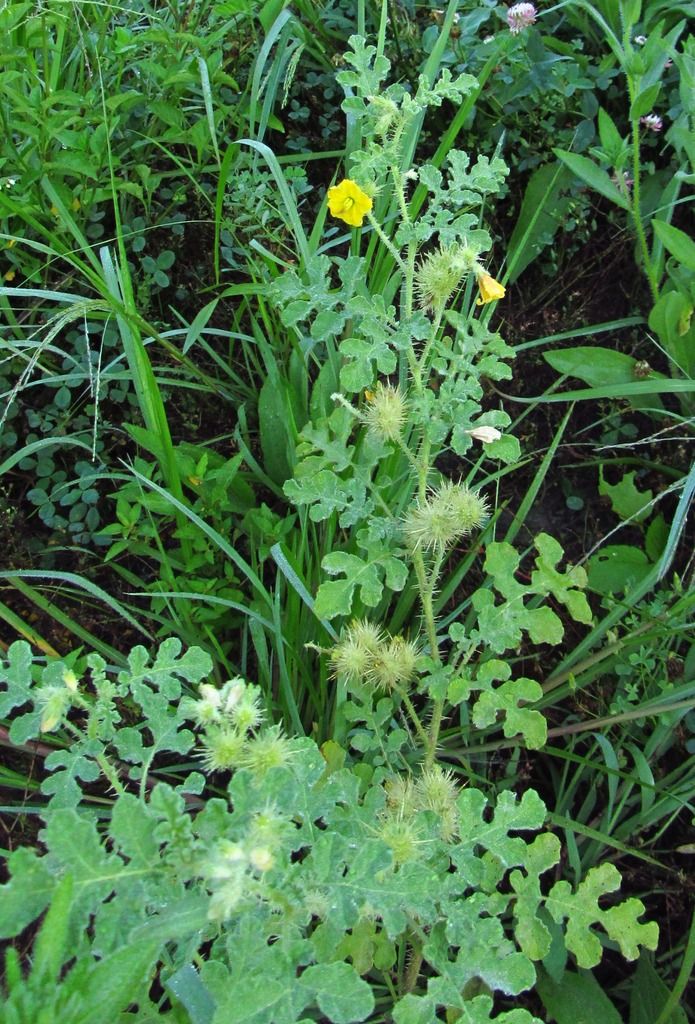 Common burdock is another European invader that has become widespread in North America. Leland Searles commented,

Tom Brown, whose books on tracking and outdoors I read years ago, called burdock seeds “survival Velcro.” In fact, the inventor of Velcro got the idea from these seeds. As inventors, we humans usually are Johnny-come-latelys.

In 1941 a Swiss engineer named George de Mestral was hunting in the Jura mountains in Switzerland when he noticed small burrs from what was later identified as the Burdock plant stuck to his pant legs and covering his dog’s fur. […]

The burrs, after all, had clung to de Mestral’s pant leg in a manner that seemed to defy gravity– and they persisted even after his dog rolled around in the grass. De Mestral was inspired to model the configuration for use in clothing.

I didn’t notice the plant I must have brushed against on a recent walk with my dog, but later realized burdock was stuck to my shoes and socks.

Some even stuck to the velcro on my coat sleeve. 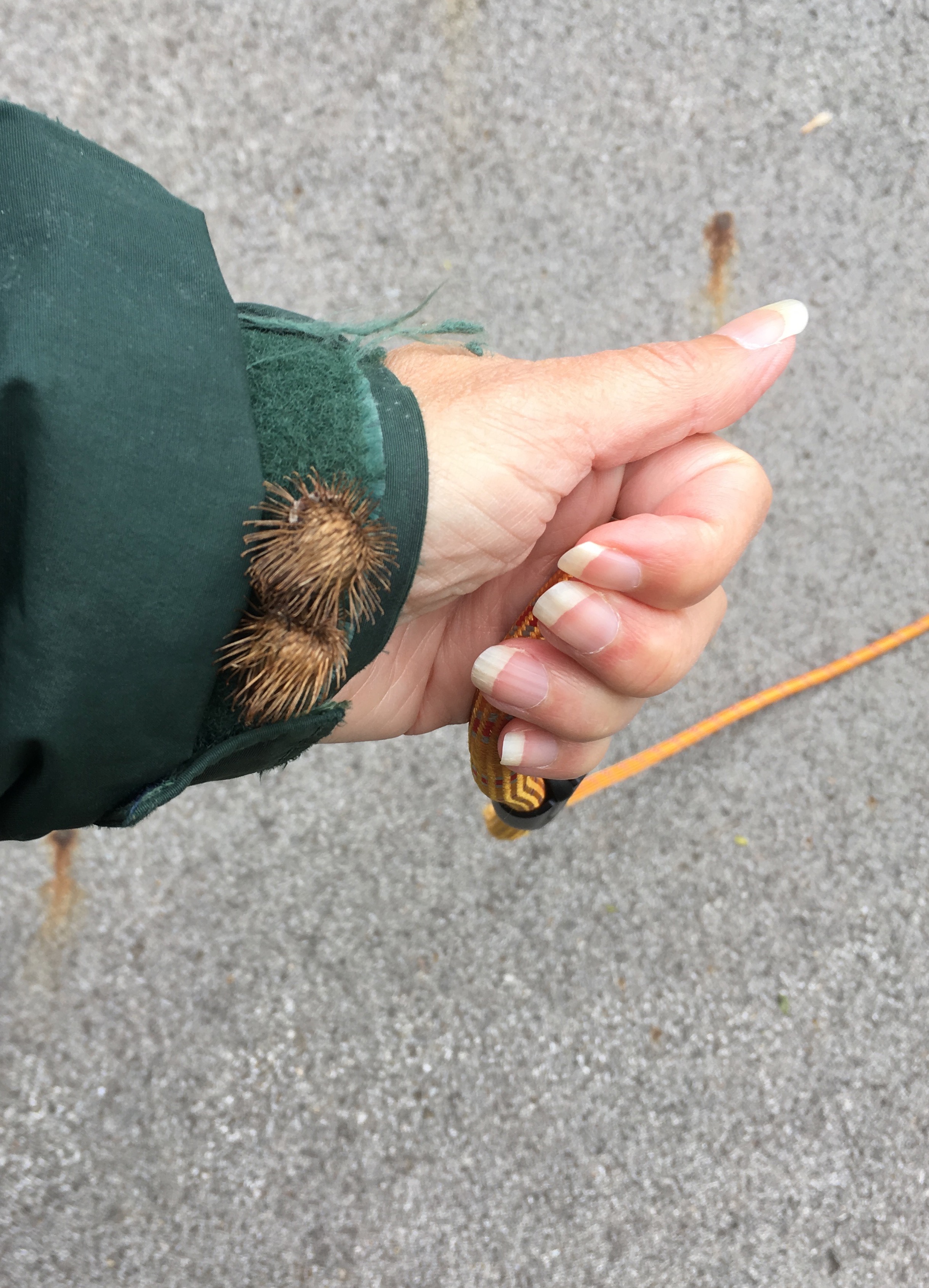