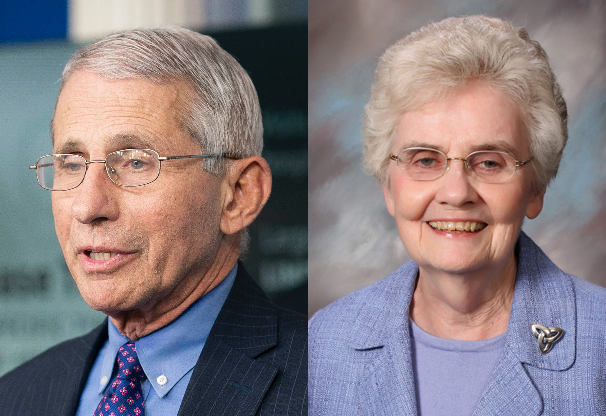 We deserve a break today. Two folks well worth "hooray"!

Herb Strentz profiles the most trusted figure of the COVID-19 pandemic and a Sister of Charity whose service to the targets of the Postville raid was legendary. -promoted by Laura Belin

Pardon the trifling with the McDonald’s jingle, but it catches the refreshing touch intended to recognize a couple of wonderful people — one you’re familiar with and one you’ll be delighted to meet.

They are Dr. Anthony Fauci, 79, director of the National Institute of Allergy and Infectious Diseases since 1984, and Mary McCauley, 81, a Sister of Charity of the Blessed Virgin Mary.

For most of us, Dr. Fauci, lives mostly in the news, fighting COVID-19, among other foes.

Sister Mary lives in Mount Carmel Bluffs in Dubuque, a senior community with others of her religious order.  She was the embodiment of a just and compassionate response to the May 12, 2008 raid of a meat-packing plant in Postville, Iowa, by some 900 agents of the Department of Immigration and Customs Enforcement (ICE).

She became involved as the pastoral administrator of three small rural parishes in Northeast Iowa —including the targeted Postville. She was well-supported by the pro bono work of Sonia Parras, an immigration lawyer in Des Moines.

An aspect of Dr. Fauci that resonates well is not his dealing with COVID-19 — praiseworthy as that is — but in his relationship with AIDS activist Larry Kramer who died in May. That relationship began in vitriol and ended, as Fauci would say, “in love.”

In 1988, Fauci was the face of the federal government in what there was of a fight against AIDS.

He recalled when he became acquainted with Kramer:

“How did I meet Larry? He called me a murderer and an incompetent idiot on the front page of the San Francisco Examiner magazine.”

As was his habit, Kramer figuratively yelled at Fauci in the open letter,

“Your refusal to hear the screams of AIDS activists early in the crisis resulted in the deaths of thousands of Queers. Your present inaction is causing today’s increase in HIV infection outside of the Queer community.”

What’s marvelous is how Fauci responded.  Not in vitriol, or in dismissal of Kramer’s “Fake News,” but rather:

“I thought, ‘This guy, I need to reach out to him,’” Dr. Fauci recalled. “So I did, and we started talking. We realized we had things in common.”

Those “things in common” resulted in far more effective treatment of AIDS and in Dr. Fauci becoming Kramer’s physician, even working to get him  a liver transplant at age 66, extending his life for more than a decade.

Not only did Kramer regain his health, but his transplant set a precedent for H.I.V. patients and older patients.

Far more awaits us in news coverage of Dr. Fauci.

Sister Mary McCauley, like most of us, waits out COVID-19, even now in her 64th year in the Blessed Virgin Mary order. Her service to some 400 ICE targets and victims of the Postville raid is best told in an informative and moving talk she gave in San Antonio, Texas. She well outdoes news accounts of what happened in Postville a dozen years ago.

These comments were updated in email exchanges and by an article in the June issue of Sojourners magazine.

So let’s hear from Sister Mary, and some of her thoughts about working for and with those pejoratively called “illegals” or worse.

“News reporters asked […] Do you support people who break the law? I do not support the breaking of a law but I wholeheartedly support reviewing a law when it is not in accord with a well-informed conscience, the values of our country or it is no longer meeting the need of the day, for I knew that there is a law within our human heart, the law of love and the law of justice, that at all times must direct our thoughts, words and actions.  My response was rooted in my own story.”

About “my own story”: One might think that people in religious orders or various forms of service come from families with parents or relatives similarly employed or active do-gooders.

“My father served as District Attorney of Milwaukee County from 1944 until his death in 1964. In the fall of 1964 he was engaged in another election […] he was also engaged in a struggle with cancer.  A few days before he died he spoke with our pastor, and said this, ‘I want to die in office and go out with my head held high in vindication for the principles for which I have fought […] I have tried to lend dignity to my office and as a public servant to defend the rights of the little people.’

“These words came to my mind during the days following the raid.  They stayed with me, gave me courage and motivated me especially when I was asked about helping ‘illegal immigrants and my support of those who broke the law […]’

“My hope is that the Postville Story [still has] the power, not only to transform individual hearts, but ultimately to play a part in the critical transformation of our current immigration laws. Transformation is the result of openness and careful listening.

After an hour or so of standing outside the plant I recognized that there was nothing …I could do for the 389 arrested workers who were […]stripped, searched, shackled and forced onto buses bound for the Cattle Congress in Waterloo.  Innately I knew that my presence was needed at St. Bridget’s.  I returned to the Church only to discover a group of women huddled together with their children.  A young boy approached me and said:  ‘Can our friends come too?’

My spontaneous response was: ‘Of course they can […] tell anyone who is afraid or alone to come to St. Bridget’s.’

“Little did I know what those words would mean when […] over 400 men, women and children were pouring into St. Bridget’s.  They came to be with friends and family members. They came to see who had or had not been detained. They came because they were too afraid to be alone for fear that ICE officials might come to their homes. They came trusting that the Church and the Postville Community would guide and help them at this most horrible time in their lives.

“Despite the trauma, to be at St. Bridget’s […] was to see humanity at its best: people bringing food, blankets, pillows, toothbrushes, games. To be there was also to see what happens when the law of the land does not keep up with need of the land [….] when the law of the land does not provide a means for our 21st century immigrants, to ‘regularize their status in our country.’ We accept their labor, we depend on their labor, but we do not accept their presence.  Instead we call them and treat them as criminals.

“The tragedy of Postville screams for our compassion, our attention and our involvement in immigration reform.”

To cope with challenges and frustrations, Sister Mary says she turned to and still turns to an admonition from Christ speaking to the Apostle Paul in a vision noted in Acts 18:9-10: “Do not be afraid; keep on speaking. For I am with you…”

And it’s great to have Dr. Fauci and Sister McCauley with us.