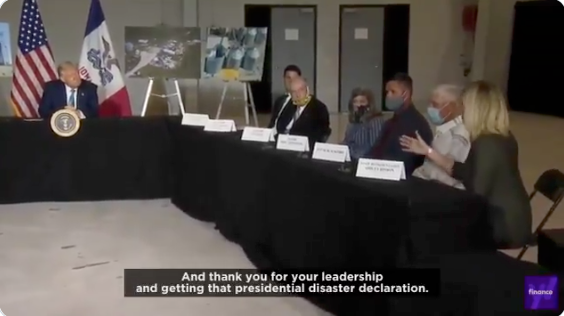 President Donald Trump came to Cedar Rapids on August 18, ostensibly to offer support after last week's devastating derecho. Like most things about this presidency, his visit was not normal.

Trump invited no Democrats to his briefing at the airport. Governor Kim Reynolds, Senators Joni Ernst and Chuck Grassley, Iowa Secretary of Agriculture Mike Naig, and Cedar Rapids Mayor Brad Hart were among the Republican guests. One state legislator was there too: State Representative Ashley Hinson.

Hinson tweeted her gratitude toward Trump and a short clip from the briefing, in which she thanked the president and highlighted the need to repair school buildings.

I'm extremely grateful to have talked with @realdonaldtrump today about the devastation Iowans are experiencing due to #derecho2020. Both POTUS and @fema are getting us the resources we need to help rebuild our communities. #HD67 #ialegis pic.twitter.com/R8J0aPKYmC

U.S. Representative Abby Finkenauer wasn't invited to the event but took the high road. She tweeted that she appreciated the president's visit and hoped he would "hear directly from Iowans affected by this disaster," adding that it's "critical" for Trump to "immediately approve Iowa's entire request for a major disaster declaration, including assistance to affected individuals and households."

Reynolds had requested an expedited Presidential Major Disaster Declaration and just under $4 billion in federal assistance on August 16. The following day, Trump approved $45 million in Federal Emergency Management Agency funds for repairing public infrastructure, but not the governor's request for individual assistance from FEMA ($82.7 million to cover an estimated 8,273 damaged homes and $3.77 billion for damage to farmland or agricultural buildings).

I assume Trump will make good on his promise to "take care of" the individual assistance piece, because not doing so would cost him thousands of votes in eastern Iowa. Not only is this catastrophe worse than the 2008 floods, it's hitting many residents already suffering the economic fallout from the worst pandemic in living memory.

Hinson portrayed the approval as a done deal: "Both POTUS and @fema are getting us the resources we need to help rebuild our communities." As the Republican challenger in Iowa's first Congressional district, she needs that to happen.

A more comprehensive post on the state of play in IA-01 is in progress, but for now let's consider whether associating herself with Trump will be a net plus for Hinson.

Speaking with political junkies about the first district, I often hear about how many Trump supporters live there. And it's true, northeast Iowa counties swung heavily toward Republicans in 2016. But it's worth recalling that Trump carried the 20 counties in IA-01 by a relatively small margin: 48.7 percent to 45.2 percent.

A vote share below 49 percent is not a great starting point. It's hard to imagine the president's standing has improved in this part of the state lately, since public polls this summer have shown him barely leading Biden statewide.

IA-01 is more Democratic than Iowa as a whole. In the 2018 governor's race, Fred Hubbell outpolled Reynolds in those counties by 49.3 percent to 48.0 percent, despite losing statewide by 50.3 percent to 47.5 percent.

Lots of older white Catholics live in northeast Iowa, and Biden is poised to improve on Hillary Clinton's showing among that demographic.

That's not an insurmountable advantage for Democrats, but it's safe to say that if the battle for Iowa's electoral votes is decided by a narrow margin, Biden will beat Trump in IA-01.

Hinson may outperform the top of the GOP ticket; she was re-elected in 2018 from a suburban state House district that supported Hubbell for governor. But she probably can't overcome a big deficit for Trump in the IA-01 counties, and she can't afford to lose Linn County (containing the Cedar Rapids metro) by the kind of margin Finkenauer had against GOP incumbent Rod Blum in 2018. The Democrat will likely run up a bigger margin in Dubuque (her home town) this year than she did last cycle, because Hinson doesn't have the deep roots Blum has in that area.

Any comments related to Trump's visit or the first district race are welcome in this thread.