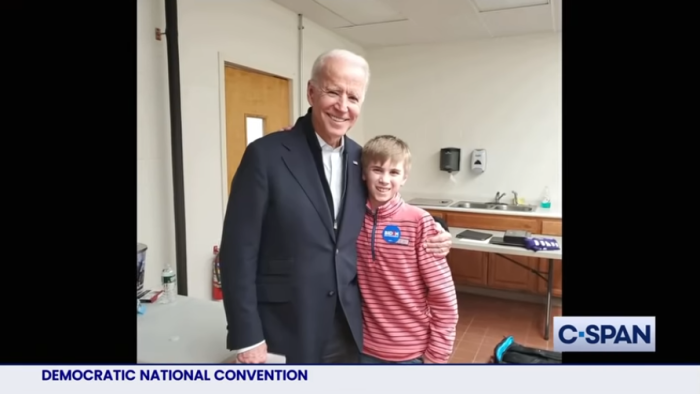 Ira Lacher: Donald Trump is Cain, who slays his brother Abel, hoping to gain favor from God. Joe Biden is Job, who suffers so much yet remains faithful. -promoted by Laura Belin

What did we learn from the just-concluded Zoom meeting organized by the Democratic National Convention? We learned that the 2020 election is a battle of metaphors.

Donald Trump is the greaser you’d shoo away from your daughter with a shotgun. Joe Biden is the kid who always gets your daughter home by curfew, walks her to the door and sees that she gets safely inside, all without even trying to steal a goodnight kiss.

Donald Trump is Joffrey Baratheon, the Game of Thrones “sneering little shit,” according to Rolling Stone. Joe Biden is Jon Snow, who faithfully guards the northern borders of Wisteros.

Donald Trump is Captain Hook, who wants to annihilate Peter Pan and all the Lost Boys. Joe Biden is Captain Picard, who always guides the starship Enterprise and its crew safely home.

Donald Trump is Cain, who slays his brother, Abel, hoping to gain favor from God. Joe Biden is Job, who suffers so much yet remains faithful.

Donald Trump is a lout. Joe Biden is a mensch.

Joe Biden does not excite everyone. Maybe even anyone. Certainly he doesn’t excite left-tilting fringe Democrats, who were crusading for policy lurches, many of them off-putting to much of America, like abolishing police and private health insurance. These no-one-but-AOC/Bernie/Liz progressives are still mad at the Democrats for nominating Hillary Clinton in 2016. And just as then and in 2000, they threaten a Biden victory by threatening to withhold their votes.

Joe Biden was not my first choice for the Democratic nominee. I wanted a nominee who would spearhead a new, dynamic way of dealing with poverty, of inequality, of climate disaster.

But then, COVID-19 brought the entire world to the emergency room. And thanks mainly to Donald Trump’s bizarro non-response to the pandemic, America finds itself flailing amid its worst health crisis, its worst economic crisis and its worst divisiveness.

So now is not the time to get behind a captain determined to embark on new ports of call. Now is the time to get behind a captain who knows how to seal the leak in the boat and bail it out when it’s taking on water in the middle of the ocean. A president who can reassure our generations-long allies and each and every American that the most consequential nation-state since ancient Rome will not go permanently batshit.

Most people who voted for Donald Trump in 2016 will vote for him again in November. Joe Biden can’t do anything about that. No Democrat can. But Joe Biden can persuade some of those who regret voting for Trump to not vote for him again. Maybe, like scores of influential Republicans who have endorsed Biden, he may persuade them to vote for — gasp! — the Democrat. Considering the wee margin that Donald Trump won battleground states, such as Michigan and Pennsylvania, that may be enough.

Yes, this is an election of metaphors.

Top image: Screen shot from the video of 13-year-old Brayden Harrington speaking to the Democratic National Convention about how Joe Biden encouraged him as a member of the same “club”: people who stutter.