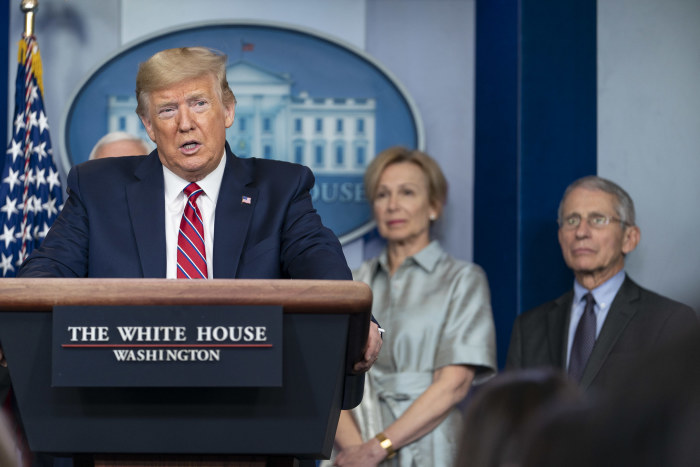 Ira Lacher: This is about refusing to do anything that could have saved your neighbor from dying. -promoted by Laura Belin

Imagine if, on December 8, 1941, President Franklin Roosevelt had told the American people, on the day after the Japanese bombed Pearl Harbor:

“There’s this little thing we’re having with Japan. But it’s fine, and it’s going to go away. It’ll be like a miracle.”

“Shame on the lamestream news media for reporting fake news that passenger planes were hijacked by terrorists yesterday and crashed intentionally into the World Trade Center and the Pentagon.”

And yet, when President Donald Trump was faced with an epidemic that he knew was one of the deadliest diseases America had encountered, he proclaimed:

““It’s going to disappear. One day it’s like a miracle—it will disappear.”

In admitting to journalist Bob Woodward that he deliberately lied because “because I don’t want to create a panic,” the president of the United States refused to take action that, experts say, would have prevented at least 36,000 people from dying.

But the president of the United States sees nothing wrong in inciting panic among white suburban voters, warning of black and brown rioters torching their peaceful neighborhoods.

Skeptics believe that after Trump’s toady party spews forth their usual cries of “fake news” that he’ll get over this, the way he won in 2016 despite admitting on the Access Hollywood tapes that he groped women’s genitals. But this admission, in Woodward’s forthcoming book, Rage, isn’t about performing a lewd act on someone none of us know. This is about intentionally refusing to take action to safeguard the American people.

This is about refusing to do anything that could have saved your neighbor from dying. Or your friend. Or a grandparent. Or a spouse. Or a parent.

We don’t know whether Republican state governors knew Trump was lying about the deadliness of the virus. So we don’t know how many additional tens of thousands died because those chief executives followed Trump’s exhortations to reopen their states long before health experts warned it wasn’t safe to do so. And, like Iowa’s Kim Reynolds, have commanded school districts to conduct in-person learning when the virus is still infecting hundreds per day, without letup.

Presidents’ terms of office begin when they place a hand on a Bible and repeat these words, from Article II, Section 1 of the U.S. Constitution: “I do solemnly swear [or affirm] that I will faithfully execute the Office of President of the United States, and will to the best of my Ability, preserve, protect and defend the Constitution of the United States.”

That Trump, in his less than four years in office, has trashed the Constitution by using executive orders to circumvent it is beyond all doubt. But that’s an esoteric argument for academics to hash over. Until this week, we didn’t know that Trump has also wilfully violated the president’s supreme duty: to protect the American people.

My relatives of The Silent Generation tell me that when FDR told America of the threat from Japan and Nazi Germany, even opponents of Roosevelt — and they were legion — rallied around the president and girded for a difficult struggle. There was no panic, only a determination to do what had to be done against a relentless and dangerous enemy.

I was no supporter of George W. Bush. But he did the right thing by informing the American public following 9/11 that we faced a grave threat from terrorists who thought nothing of using commercial airliners to kill masses of people.

In the wake of his announcement, and in his actions in the following days, Americans didn’t panic; instead we rallied around the leader of our nation as we came to grips with a reality we weren’t eager to face but did so with a national will and with tried-and-true American optimism. (Of course, Bush squandered that advantage by going to war with Iraq, a nation that had nothing to do with 9/11.)

And, God knows what I think of Donald Trump. But had he come out in February and read blandly from his prompter to tell us that we faced a dire threat from an unseen enemy and we had to take collective action to slow a pandemic while our health experts worked to stop it, he would have had my support. Because who wants thirty-six thousand — much less almost two hundred thousand total in America — of our friends, neighbors, spouses, and parents to die, needlessly and often alone?

There are those who predict that these latest revelations will do nothing to dampen the enthusiasm of Trump’s fellow travelers. After all, as Trump told an Iowa audience on January 23, 2016, “I could stand in the middle of 5th Avenue and shoot somebody and I wouldn’t lose voters, ok? It’s, like, incredible.”

But we’ll see. Because now, he’s finally gone and done it.

Top image: President Donald Trump speaks during a press briefing on March 20, 2020, with members of the White House Coronavirus Task Force. Dr. Deborah Birx and Dr. Anthony Fauci. Official White House Photo by Shealah Craighead, public domain, available via Flickr. Trump had told Bob Woodward on March 19 that he liked to play down COVID-19 so as not to make people panic.