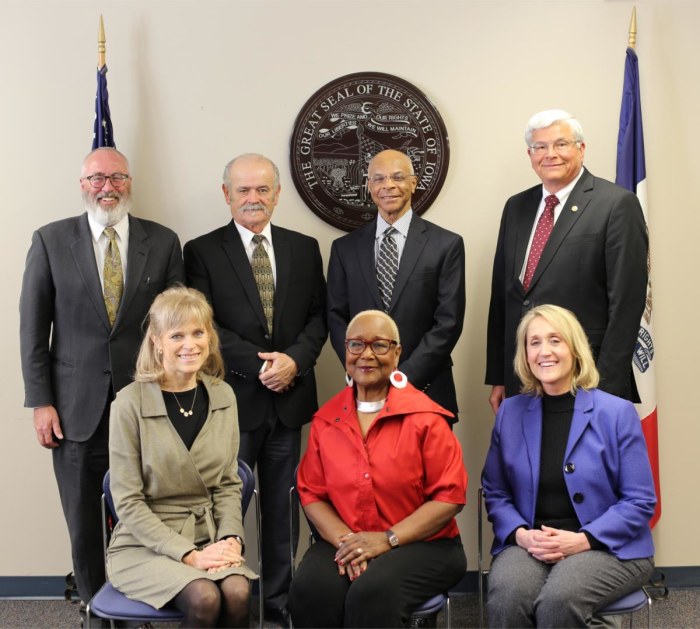 The Iowa Board of Corrections violated state law in 2019 by failing to send Governor Kim Reynolds a list of individuals qualified to serve as director of the Department of Corrections, a state audit confirmed on September 21.

Department officials assured auditors they would share the findings with the Board of Corrections and advise members of their duties under state law. Spokesperson Cord Overton told Bleeding Heartland on September 22 the department had sent board members a copy of the findings and the relevant code section.

He didn't explain why the department failed to ensure that the board complied with the statute last year, when Marty Ryan raised concerns with the acting director.

The auditor's annual Report of Recommendations for fiscal year 2019 noted that Iowa Code Section 904.105 requires the Board of Corrections to "Recommend to the governor the names of individuals qualified for the position of director when a vacancy exists in the office.” The board did not follow that process before Reynolds appointed Beth Skinner to lead the department that manages Iowa prisons in June 2019.

The Board should establish procedures to ensure compliance with Chapter 904.105 of the Code of Iowa pertaining to vacancies in the office of the Director. The Board's approval of the names of the qualified individuals and the Board's approval to provide the same to the Governor should be documented in the Board minutes.

The audit also included the department's written response: "The Department will share this recommendation with the Board of Corrections and, to the best of its ability, advise the Board of all of their duties and requirements as set in Iowa Code."

Why did it take a state audit to get department leaders to commit to having this board comply with the law? They were aware of this requirement well before Reynolds appointed Skinner.

"I WAS ASSURED THE BOARD WOULD FOLLOW THE LAW"

Marty Ryan has attended Board of Corrections meetings as an interested observer. In a Bleeding Heartland post published last December, her recounted his efforts to alert officials about their obligations.

I had been waiting for the board to convene in a regular meeting to discuss the qualifications of applicants to replace Department of Corrections Director Jerry Bartruff, who retired last December [2018]. [...]

At the Board of Corrections meeting in April [2019], I was assured the board would follow the law and recommend candidates to the governor. Acting Director Dan Craig met with me the minute I walked in the door that day. He knew I was concerned the correct process might not unfold, based on what happened when Bartruff became director several years earlier.

After Bartruff’s appointment had been announced, I informed the Board of Corrections members during a public comment time at one of their meetings that the board had the duty and responsibility to recommend qualified applicants to the governor. I cited the code section (§904.105) and witnessed several board members writing it down. They seemed shocked that they were never told about this legal requirement.

Ryan eventually learned that three board members privately "vetted all candidates for department director" but "never did so in an open meeting. The subcommittee’s recommendations were never brought before the board for a vote."

After reading the state audit on September 21, Ryan told me, "I feel vindicated." He added an observation from his life and business partner Stephanie Fawkes-Lee: "It’s problematic when those charged with upholding the law--or in this instance, with warehousing those who broke the law--cannot comply with the law.”

After the audit became public, I sought comment from Department of Corrections spokesperson Overton. Why didn't someone address this matter with board members last year? And had the department already shared the auditors' findings with the board?

In a written statement provided on September 22, Overton ignored the first question but confirmed,

The department has reviewed the Auditor's report for FY2019 that was released on Monday, September 21st. The report has been sent on to the board members for their awareness and review. The board was also provided a copy of section 904.105 of the Iowa Code, which outlines the board's duties. The department will continue to advise the Board on their statutory duties.

According to Jason Clayworth's report for the Des Moines Register, Reynolds had no idea she should have received a list of candidates before naming Bartruff's successor.

Reynolds told reporters Tuesday [September 22] she was not aware of the board's required role in the process when she appointed Skinner. She didn't specify any action that would be taken as a result of the audit.

"So, what I know about that is I think the auditor has, through a report, noted that the board didn’t fulfill a step they were supposed to fulfill, but again I did not know," Reynolds said.

The governor's legal counsel and other staff working on boards and commissions should have known about the code section. But that's a topic for another day.

Ryan wasn't trying to undo Skinner's appointment, he wrote last year. In contrast to Iowa's judicial selection process, state law doesn't force the governor to choose a Department of Corrections director from candidates referred by the board. Still, Ryan was troubled by the unlawful process.

I do believe the governor had the authority to name Beth Skinner as Department of Corrections director. However, the meeting at which the board considered applicants was illegal, since it lacked notice to the public to meet, post a tentative agenda, or provide a quorum to conduct business. [...]

Because the deliberations over possible directors happened in secret, the public can’t learn which candidates were deemed to be better qualified than the others. The public does not even know who else applied to lead the department. Those matters are essential to transparency in government, and essential to the process of choosing the best candidate.

Clayworth asked State Auditor Rob Sand about the significance of the findings.

At least this audit prompted the Department of Corrections to promise to do better going forward. That's no guarantee the Board of Corrections will comply with the statute next time there is a vacancy, but it's a step in the right direction. After the Iowa Public Information Board dismissed Ryan's open meetings complaint against the Board of Corrections, there were grounds to worry that board members would feel emboldened to flout the law in the future.

Final note: It's nice to have a state auditor who cares about these details. Under the leadership of State Auditor Mary Mosiman, auditors found no compliance issues in their report of recommendations for the Department of Corrections for the fiscal year ending June 30, 2015. However, as Ryan recalled, the Board of Corrections failed to submit a list of qualified candidates to then Governor Terry Branstad before he appointed Bartruff in January of that year. 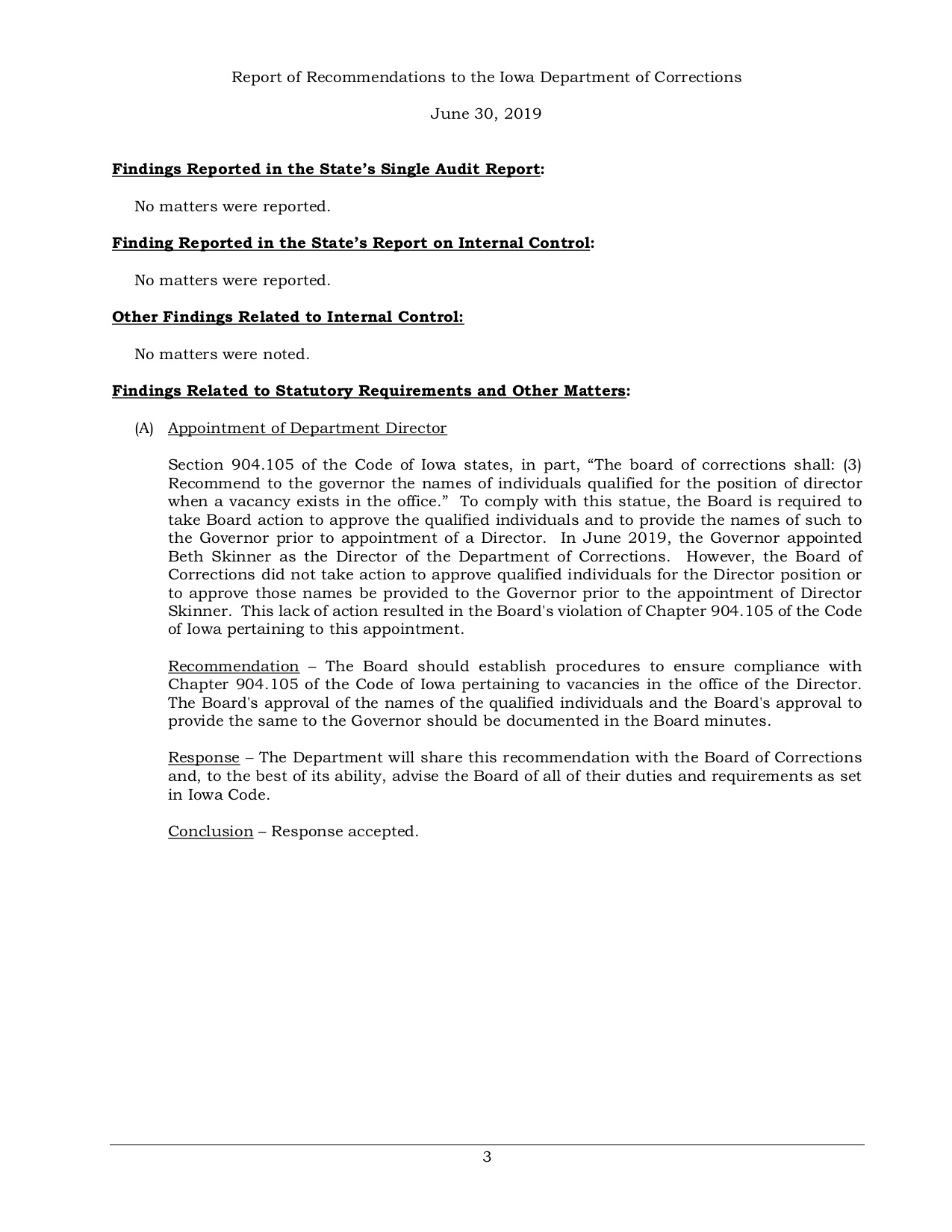