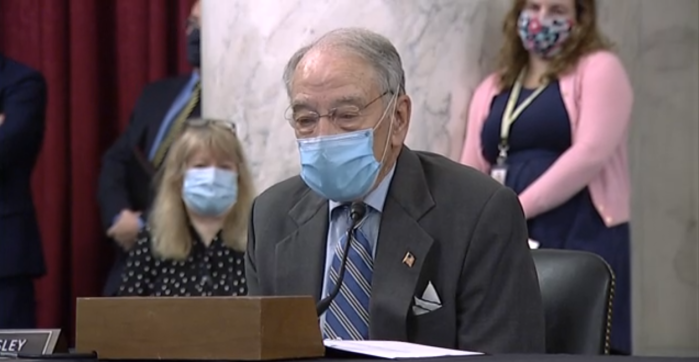 Senator Chuck Grassley has no current plans to get tested for COVID-19, his staff told the Des Moines Register on October 2.

The Senate Judiciary Committee held a lengthy hearing on September 30 to question former FBI Director James Comey about the investigation of President Donald Trump’s 2016 campaign, and an executive business meeting on October 1 to discuss judicial nominations. Videos show socially distant seating at both events. Grassley wore a mask throughout the latter meeting. At the former, he didn’t have his face covered while speaking; it’s hard to tell from the video whether he was wearing a mask at other times.

Senator Mike Lee of Utah spoke at both meetings, with his face uncovered. Like many other prominent Republicans who tested positive this week, Lee had mingled and was seated near the front at the Rose Garden event on September 26 to roll out Amy Coney Barrett’s Supreme Court nomination.

Iowa’s senators were fortunately absent from that super-spreader event. But everyone who was anywhere near Lee this past week–including all Judiciary Committee members and staff–should be getting a COVID-19 test.

“Sen. Grassley’s doctors have not recommended he be tested as he has not come into close contact with anyone suspected of having or confirmed to have coronavirus,” Grassley’s spokesman, Michael Zona, said in a statement. […]

Zona said Grassley, who is 87 and third in line to the presidency, “will continue to follow guidance from the Senate’s attending physician, the CDC and Iowa’s health officials.”

It’s good that Grassley wore a mask and was not seated near Lee during the hearing, but 6-foot separation doesn’t offer magical protection from the virus. In an enclosed space, droplets can circulate farther. And can the senator be sure he didn’t have any close contact with staff this week who had spent unguarded time around Lee? People are often infectious a few days before showing any symptoms.

Republicans’ new favorite catch phrase seems to be “out of an abundance of caution.” Lee claimed he got tested on October 1 “out of an abundance of caution” after “experiencing symptoms consistent with longtime allergies.” Sorry, no. Anyone who declines to social distance or goes without a mask, especially in an enclosed setting, forfeits all claim to being cautious or responsible. Lee went to a meeting attended by people in vulnerable groups, with his face uncovered, while feeling symptoms.

“Senator Ernst continues to follow the advice of the Senate physician, wear a mask and adhere to public health guidelines,” her spokesperson, Kelsi Daniell, said in a statement. “And out of an abundance of caution, Senator Ernst was tested for COVID-19 today and it was negative.”

Given the known incubation period for this virus, and the chance for rapid tests to produce false negative results, Ernst should get tested again in the coming week, regardless of whether she is showing any sign of illness.

While Grassley has generally worn masks in public in recent months, Ernst has not demonstrated consistently safe conduct during the pandemic. She was hugging or otherwise in close contact with many at a Hardin County GOP fundraiser in early August, telling a reporter, “I think we’re OK” because the event was outdoors. Ernst expressed no apparent concern about the mostly maskless, indoor crowd at a Pottawattamie County GOP dinner where she spoke in early September.

Even on October 3, with the president in the hospital, Ernst’s campaign failed to insist on masks for the volunteers and supporters who gathered to support her outside WHO-TV’s studio. Her political Twitter feed continued to mock Democratic challenger Theresa Greenfield for “hiding in Chuck Schumer’s basement”–that is, holding few in-person events over the past six months.

Returning to the main point of this post: Grassley’s in the highest-risk age group for severe complications from COVID-19. He should be proactive about testing, even if only “out of an abundance of caution.”