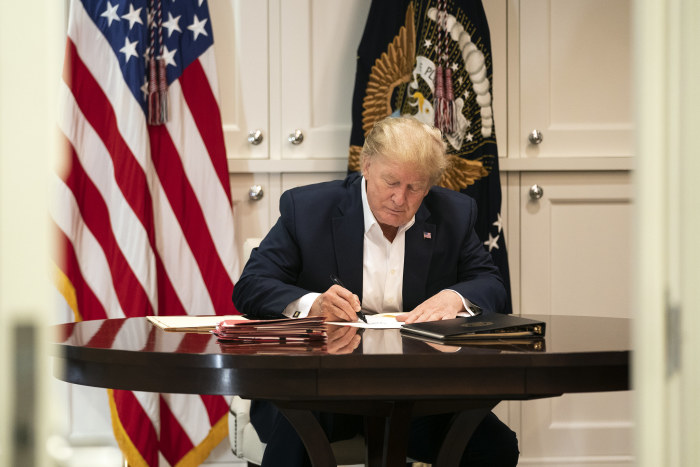 President Donald Trump was whisked away by helicopter from the White House lawn to Walter Reed Hospital to undergo treatment for COVID-19. It happened on live TV, and the American public met the news with an outpouring of concern and best wishes.

Trump responded with reckless contempt. For a long weekend in October, America seemed less like a superpower and more like an emerging dictatorship led by a man who cares more about public relations than protection.

From the beginning of Trump’s diagnosis, there was confusion and stonewalling. After all, America’s self-designated superman couldn’t be brought down by a mere virus he had compared to the flu.

Dr. Sean Conley and the prop physicians standing behind him helped reinforce the invincibility myth. Conley wouldn’t answer basic questions about the president’s health, including the last time he tested negative for COVID-19. His answer to a question about the use of supplemental oxygen turned out to be a lie. Later, he spun the lie by saying he was “Trying to stay upbeat.”

The doctor channeled the patient.

While hospitalized, Trump tried to control the narrative. Instead of relying on doctors to give honest details about his condition, he produced his own version of reality through videos and photos, pretending to work because no virus could stop him from doing the work of the American people. Never mind that some of that work appeared to be signing a blank piece of paper.

The only thing that spoiled his narrative was a pesky free press that continued to ask the hard, never-answered questions.

Images have defined and sometimes doomed American presidents and presidential candidates. They include pictures of Michael Dukakis driving a tank in an oversized army helmet, George W. Bush standing on a battle carrier in a flight suit proclaiming “Mission Accomplished,” and George H.W. Bush throwing up in the lap of the Japanese prime minister.

But with this October surprise, the current president trumped them all and created two images that will live in the archives of bad judgement.

Like a toddler fussing before nodding off, Trump forced the Secret Service into a COVID-19 joyride to soak up the adulation of his followers. The only problem was the image of an infected president breaking quarantine against all medical directives. That one spread faster to social media than coronavirus did at that Rose Garden ceremony.

The second image he may regret is the one of a Trump striding up the stairs to the White House only to strip his mask off for some kind of grim reality TV show as he stood on the balcony, face uncovered, saluting his helicopter. 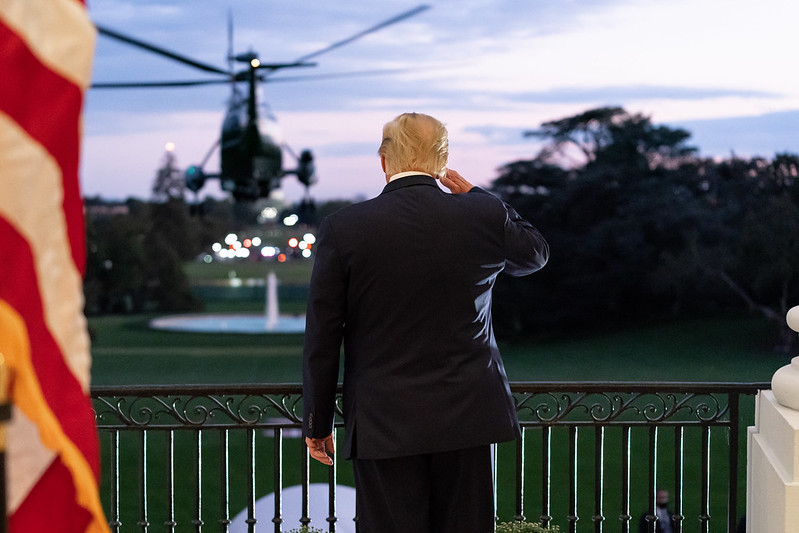 Unhappy with the first take, he came back unmasked to finish the shoot and potentially contaminate even more of his staff and film crew.

After he settled into his so-called quarantine in the White House residence, he made a video telling the American public not to fear COVID-19. Never mind that he was given experimental treatments, unavailable to most, as well as steroids usually reserved for only the sickest patients.

And the surprise continues. We still don’t know when the president tested negative before he tested positive, so there is no way to accurately contact trace. We also don’t know how sick Trump really is, because he refuses to release his lung scans.

Now, the White House has devolved into a hot zone monitored by FEMA.

But my guess is history won’t be kind to his COVID cruise and his unmasked grim reality show during a pandemic. 215,000 Americans weren’t available for comment on the long weekend of the October surprise.

Bruce Lear lives in Sioux City and retired after 38 years of being connected to public schools. He was a teacher for eleven years and a regional director for the Iowa State Education Association for 27 years until retirement. You can reach him at BruceLear2419@gmail.com.