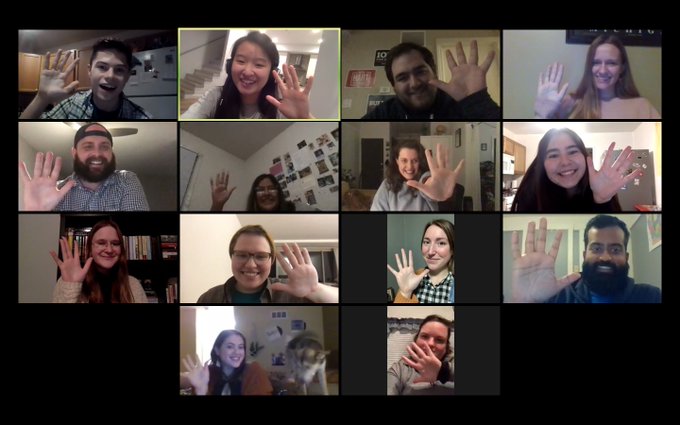 Youth vote could be decisive in Iowa, other states

Dan Guild digs into polling data for clues on how big an opportunity the youth vote represents--not just in Iowa, but in every close race across the county. -promoted by Laura Belin

In the aftermath of 2016, the press focused on a number of reasons for Hillary Clinton's defeat. Rural voters were appropriately at the center of that discussion. Less discussed was what happened with those under age 30.

In the aftermath of that election, I researched the impact of young voters. I found that had Clinton carried the youth vote by the same margin as Barack Obama, she would have won 306 electoral votes.

Exit poll data on the youth vote isn't perfect, but even with its limitations, evidence suggests the decline in Democratic support among those between the ages of 18 and 29 was arguably the decisive factor in how Democratic margins declined from 2012 to 2016.

More than a third of Donald Trump's margin was made up from defections among those under 30 years of age. In Iowa, he won the youth vote.

What does the data say about 2020? This chart shows results from recent Iowa polls that released the cross-tabs of their results by age (sometimes under age 35, sometimes 30). Both the race for president and for U.S. Senate--probably the most important Senate race in the nation--are close.

But what isn't close is the youth vote. Remember, Trump carried Iowa voters under age 30 in 2016 by 6 percent. He is behind by as much as 37 percent this year. Caveat: the young voter sample in each poll is small.

But this polling is not unique. I have tracked 22 national polls that have released data on younger voters. In those polls, Biden leads Trump by 57 percent to 30 percent. That 27 point margin is larger than Obama's margin over Mitt Romney in 2012.

Let's look at the raw numbers in Iowa. Democratic turnout with those under age 35 has declined significantly since 2008. Additionally, the Democratic voter registration lead in this group (50,000+) is now almost gone.

But the other element is the size of the no-party vote among those between the ages of 18 and 34. That trend is not specific to Iowa: Pew has noted that the young are substantially less likely to register by party, and you see that in these numbers.

In 2016 about 23 percent of ballots cast came from those under 35. When you consider the incredible shift in preferences among that group, you begin to realize just how big of an opportunity the youth vote represents--not just in Iowa, but in every close race across the county. 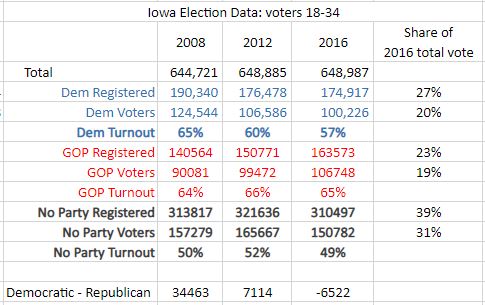 If Democratic-leaning youth vote in numbers like they did in 2008, and if all youth vote in large numbers (as polls currently predict), they will represent an enormous force for change.

According to the statewide statistical report from the 2016 general election, 117,015 Iowans between the ages of 18 and 34 cast ballots before election day. The total participation for that age group was 362,920.