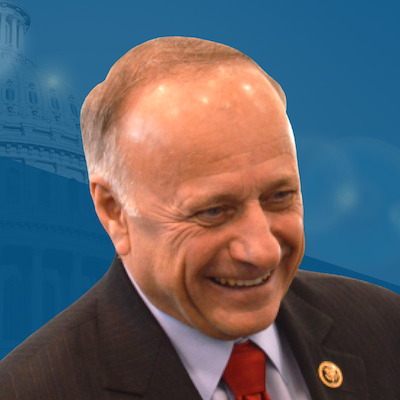 Outgoing U.S. Representative Steve King was one of 23 Republican members of Congress who sought unsuccessfully this week to have the U.S. Supreme Court throw out Pennsylvania’s presidential election.

Iowa has long had no-excuse voting by mail, and to my knowledge, King has never suggested that system is unconstitutional. Neither King nor his Congressional staff responded to Bleeding Heartland’s inquiry about the apparent inconsistency. In the past month, King has amplified false claims of election fraud on his social media feeds.

The Pennsylvania Supreme Court rejected Kelly’s suit in late November, saying it was filed too late. That state’s Republican-controlled legislature approved and the governor signed a law expanding mail-in voting in 2019, but Kelly didn’t file his case until after Joe Biden had defeated Donald Trump in the state.

The U.S. Supreme Court rejected the attempt to block Pennsylvania’s certification in a one-sentence order from Justice Samuel Alito on December 8, with “no recorded dissents.” Alito’s order came out less than an hour after the final brief was submitted in that case.

On a related note, the Republican attorney general of Texas filed an absurd lawsuit on December 7 seeking to have the U.S. Supreme Court stop the states of Georgia, Wisconsin, Michigan, and Pennsylvania from casting electoral votes for Biden. Supreme Court blogger Amy Howe explained,

This highly unusual use of the court’s original jurisdiction — which is most often used to resolve interstate disputes involving, for example, water rights — came just six days before each state’s electors are required by law to meet and cast their ballots in the Electoral College.

The filing by Texas Attorney General Ken Paxton accuses government officials in the four states of using the COVID-19 pandemic to make changes to their states’ election laws through “executive fiat or friendly lawsuits, thereby weakening ballot integrity.” The state officials, Paxton writes, “flooded” their states with absentee ballots and “weakened the strongest security measures protecting the integrity of the vote-signature verification and witness requirements.” As a result, Paxton contends, the 2020 election “suffered from significant and unconstitutional irregularities in those four states” – for example, treating voters in Democratic areas more favorably than in other areas. When taken together, Paxton asserts, these flaws make it impossible to know who “legitimately won the 2020 election and threaten to cloud all future elections.”

North Carolina also extended its deadline for receiving absentee ballots, and Iowa has long allowed absentee ballots to be counted if they were mailed at least one day before the election and arrive by the following Monday. However, Texas is not seeking to toss out those states’ presidential election results, presumably because Trump carried both.

Republican attorneys general from seventeen states filed a brief on December 9 supporting the Texas suit. Brad Heath, who covers big court cases for Reuters, noted that some of those states have laws similar to those being challenged. Texas’ own governor extended early voting for the 2020 election, due to the COVID-19 pandemic.

Iowa’s Attorney General Tom Miller, a Democrat, did not join this effort, which is nearly certain to fail in the Supreme Court.

UPDATE: King was among 126 House Republicans to sign a brief in support of the Texas lawsuit.