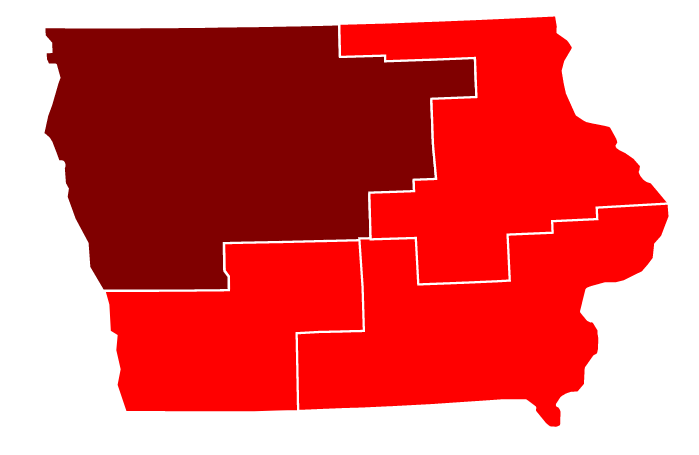 The Cook Political Report developed the “partisan voting index” during the 1990s as a way to measure whether a state or a Congressional district leans toward one party, compared to the nationwide electorate. For each district, votes for president in the two most recent elections are compared to the national popular vote.

Based on presidential voting in 2008 and 2012, when Barack Obama won Iowa's electoral votes and had double-digit advantages in the eastern Iowa Congressional districts, the Cook Political Report calculated the PVI's for Iowa's four U.S. House seats as follows:

Many Democrats can't break the habit of seeing eastern Iowa as naturally friendly territory, but that hasn't been true for a while. After Donald Trump outpolled Hillary Clinton by about 9.5 points statewide in 2016 and carried every Congressional district, the Cook Political Report calculated these PVIs for Iowa's U.S. House districts based on the 2012 and 2016 results:

Trump won Iowa by an 8-point margin last month and again gained more votes than his Democratic opponent in every Congressional district (though it was very close in IA-03). I wrote shortly after the election, "Looking only at the 2016 and 2020 presidential voting, I would guess that the PVI for the two eastern Iowa districts will be in the R+4 to R+5 range. The third district might be more like R+3." That turned out to be a good guess.

Using a partisan voting index calculator that you can download here, I entered the 2016 and 2020 presidential results statewide and each U.S. House seat.

Note: Cook's analysts use the two-party vote share for these calculations. So for PVI purposes, this year's national popular vote works out to 52.26 percent for Biden and 47.73 percent for Trump. Iowa's certified results show Trump won 53.1 percent of all ballots cast for president, while Biden won 44.9 percent. But looking at only the votes for Democratic or Republican candidates, Trump had a 54.2 percent vote share in Iowa, while Biden had 45.8 percent.

After doing the same math for each Congressional district, I came up with the following:

Click on any Congressional district on this interactive map to bring up raw votes and the two-party vote share for Clinton and Trump in 2016 and Biden and Trump in 2020.

Note that Biden barely improved on Clinton's showing in the first, second, and fourth districts. Only in the third district did he noticeably outperform Clinton, and not by much. In those sixteen central or southwest Iowa counties, Trump won 51.9 percent of the two-party vote share in 2016 but only 50.0 percent this year.

Some might be surprised to see the third district colored red on this map, given that Democratic Representative Cindy Axne defeated David Young with 48.9 percent of the vote to the Republican's 47.6 percent. But this map isn't about Congressional voting. It's about votes cast for president. For the second election in a row, Trump did better among residents of IA-03 than he did among the national electorate.

This Congressional map will become obsolete after Iowa lawmakers approve a redistricting plan in 2021. It's possible that one of our new Congressional districts will lean Democratic--for instance, if Polk and Story counties end up in the revamped IA-03, or if Linn and Johnson counties are both part of IA-02 (as they were during the 2000s).

But for now, Democrats should harbor no illusions about where we stand. Iowa voters lean about 6 points more Republican than U.S. voters, and every Congressional district as currently configured is an uphill battle for a Democratic candidate.

UPDATE: I changed the headline to make clear that GOP candidates are favored in every district. Three of them would be considered "lean Republican" seats, while IA-04 is solidly Republican.