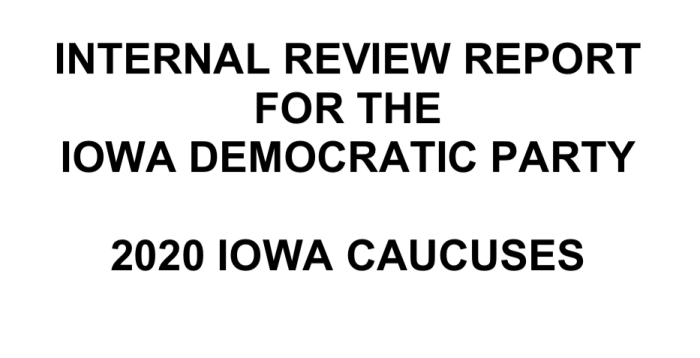 Ira Lacher highlights key points from the internal review of the 2020 Iowa caucuses, conducted for the Iowa Democratic Party. -promoted by Laura Belin

Iowa political junkies have another reason to be thankful that Joe Biden and Kamala Harris will be sworn in on January 20.

Since a Democratic nomination fight for the 2024 elections appears unlikely, it means that, like a baseball pitcher undergoing Tommy John surgery to repair a horribly injured shoulder, the Iowa caucuses have more time to rehab from their 2020 kerfuffle, which earned worldwide derision.

When the party on December 12 released its postmortem on the 2020 debacle, news outlets were quick to blame the Democratic National Committee (DNC) for much of the trouble. "Iowa autopsy report: DNC meddling led to caucus debacle," was the headline from Politico. "Iowa caucus mishap fueled by DNC interference, state missteps: autopsy report" chimed in The Hill. From CNN: "Review largely blames Iowa caucus problems on Democratic National Committee." USA Today and The New York Times also treated the story similarly.

And they were all wrong. Because that's not what the 29-page report says.

The report, prepared for the Iowa Democratic Party (IDP) by the Campbell Law Firm and Faegre Drinker Biddle & Reath LLP, agrees that the DNC, which prefers primaries to caucuses, delayed the IDP's planning process by failing to sanction the state's satellite caucus proposals until late summer. In addition, the DNC's drawn-out cybersecurity concerns held up development of the reporting app, which flummoxed most caucus chairs on caucus night, leading to long-delayed release of vote totals.

"The DNC has certainly taken the position that there should no longer be caucuses in any state and has imposed requirements that make it even more difficult to carry out caucuses," the report states.

Additionally, the report calls out the DNC for mandating use on caucus night of software to convert the caucuses' raw tally figures into data useful to the DNC. A coding error caused the software to malfunction, further delaying the vote reporting. "Attempting to graft an entirely new software element onto the back-end reporting system at the proverbial eleventh hour is likely always going to be problematic, and it was ultimately the cause of a major problem on caucus night," the report says, noting that the IDP was not involved in the tool's development.

But mostly, the report indicts the IDP for lack of foresight, organization, communication, training, and inability to deal with and correct challenges on the fly.

On the IDP's endorsement of the notorious reporting app, developed by Shadow, Inc. (now known as BlueLink):

"The DNC did arguably contribute to the delay in the development of the app by withholding its final determination on virtual caucuses until August 2019 and by taking over a month to then approve Shadow as the IDP’s app development vendor. However, the IDP—not the DNC—is ultimately responsible to ensure that its caucus tools and infrastructure are in place prior to the caucuses. In this case, that would entail contracting with Shadow in June 2020 and beginning the development process immediately—even if the IDP was uncertain whether the DNC would approve of Shadow as a vendor. The risk of loss for the IDP in contracting with Shadow in June 2020 was a few thousand dollars in wasted development costs. But the risk of loss for the IDP in waiting until October 2020 to contract with Shadow was much greater: a rushed and very late app rollout." (page 21)

On the IDP's lack of training temporary caucus chairs in the use of the app, which resulted in most chairs forsaking the app in favor of reporting the results by phone, which led to additional problems:

"Because the reporting app was rolled out a mere two weeks before the caucuses, users received no training on the installation or usage of the app. They were left to stumble their own way through a convoluted installation process, which was too demanding on the many users who lacked tech expertise. Emails sent to the IDP’s app support email address frequently went unanswered. Most temporary chairs and precinct chairs simply gave up on using the app and decided to call their results into the IDP’s boiler room without even attempting to report through the Shadow app. The IDP did not encourage them to use the app and instead confirmed that users should simply call in results if they didn’t want to use the app." (page 22)

On the IDP's inept organization, staffing and management of its "boiler room" communications and reporting center, which consisted of too few volunteers, too few phone lines, and security measures that prevented volunteers from accessing the web-based tools needed to tabulate for information from nearly 2,000 caucuses:

"First, there were issues with the technology, including not being able to access the webtool for volunteers to input the caucus results into the Shadow database. This was the result of a failure to integrate the technology into the plan for the boiler room. Second, there was a high call volume and an inability to adequately handle that high call volume. Specifically, there were not enough telephone lines and volunteers; the IDP had two different public phone numbers that were ringing into the boiler room in addition to the phone number provided to caucus chairs; the incoming calls were not segregated by number; there was no ability to scale up; and, as the night wore on, call volume increased due to incoming calls from both well-intentioned and possibly some not-well-intentioned callers. Notably, these issues were all deficiencies in the IDP’s general planning and preparations for the boiler room prior to caucus night." (page 24)

On the IDP's naivete and clumsiness in dealing with an insatiable media desire to report the results that night:

"[T]he IDP appeared to contribute to expectations with the media that were not likely achievable—or it at least failed to effectively manage the media’s expectations. There was a clear expectation by the media that they would have results to report on caucus night, even early on caucus night. When the results were not made available immediately, the media sharply criticized the IDP and the caucus process. ...  The IDP should consider proactively managing media expectations regarding the timing of caucus results reporting and overtly build into those expectations the possibilities of unexpected procedural or technical problems and difficulties arising from close races." (page 25)

Finally, the report squarely recommends that if the Iowa caucuses are to continue, it is up to the IDP to recognize reality: that unlike its Republican counterpart, which was flawless in 2020, the quaint and charming process, which includes the complicated candidate viability requirement, may be as anachronistic as Grant Wood's American Gothic:

"The DNC has certainly taken the position that there should no longer be caucuses in any state and has imposed requirements that make it even more difficult to carry out caucuses. Those requirements included mandatory reporting of the initial expression of the vote and the requirement that the final expression be preserved for recount/recanvass purposes. Further, Iowa faced an additional challenge in balancing the requirement to provide non-present participation opportunities while still maintaining its position as first in the nation in presidential election cycles. Specifically, Iowa had to avoid any process that looked like primary voting or a ballot; otherwise, it faced the threat of New Hampshire moving up its primary to take place before the Iowa caucuses. These circumstances created some limitations on what Iowa could do to both fulfill the non-present participation requirement and maintain its first-in-the-nation status. ...

"The bottom line is that the caucus process is complicated. Some criticize the complex nature of the calculations that need to be conducted by precinct chairs. Some criticize the fact that a candidate receiving less than 15% at a precinct caucus is considered non-viable and receives no delegates. Others criticize the lack of accessibility that can result from requiring everyone to participate on caucus day (and, for the most part, on caucus night) and from the length of time it takes to participate."

The report makes clear that the IDP has a lot of splainin' to do. "If the IDP determines it will continue to conduct caucuses," the report concludes, "it should consider (1) simplifying the caucus process, similar to the caucuses held by the [Republican Party of Iowa] and in other states; and (2) finding a way to increase early participation similar to Nevada’s caucuses."

No state is going to change the mind of the Democratic National Committee, which, agreeably, has its own problems electing people to federal and state legislatures and governors' chairs. But it is up to each state party to organize, recruit appealing candidates, communicate why people should vote for them, and in Iowa's case, present a titanium-clad reason why the rest of the world should give a damn what we think.