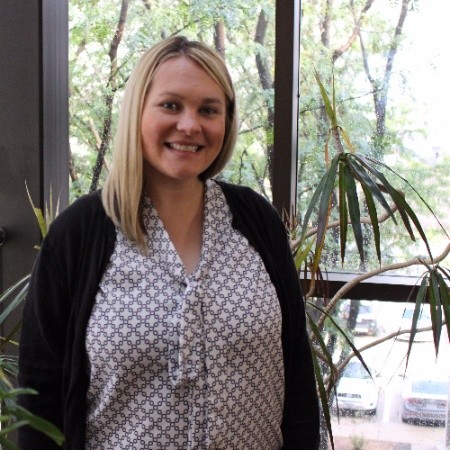 But first, some background on myself and how I became involved in this work.

My name is Rachel Manuel Bruns, and I live in Des Moines. I grew up in eastern Iowa and earned my undergraduate degrees at Drake University with majors in Law, Politics, and Society and Public Relations. I also completed my Masters in Public Administration at Drake. I have two children, and my spouse is a clinical pharmacist. I work full-time for a national nonprofit association working to expand access to volunteer and national service opportunities.

I spend a considerable amount of time immersed in maternal and fetal medicine research and providing support to central Iowa families facing challenges accessing quality maternal health care. I currently volunteer as a chapter leader for the International Cesarean Awareness Network and also serve as a patient advisor for the new Iowa Maternal Quality Care Collaborative.

While I’m part of these groups, what I write at Bleeding Heartland should not be misconstrued to represent anything other than my own opinion. Additionally, nothing I share should be viewed as medical advice.

I started my journey with Iowa maternal health care almost four years ago when I was pregnant with my first child. When I found out I was expecting, I asked my primary care doctor who they recommended for obstetrics and I was referred to a local OB-GYN group. Little did I know that recommendation would change my life. If I knew what I know now about maternal health, I would not go to that provider group (and many others in the metro).

I did not enjoy being pregnant by any stretch of the imagination, but I was lucky not to have any complications with either pregnancy. So my perspective largely stems from difficulty finding providers who were willing to support my birth plan, as opposed to issues related to pregnancy or postpartum care--though Iowa women face many challenges around those issues as well.

It is now common knowledge that Iowa (along with the rest of the country) is facing a maternal health crisis. Maternal mortality is on the rise, and we are facing an OB-GYN shortage, along with an increase in the closure of labor and delivery units.

Since other news media have covered those problems, my writing here will focus on what I think local media is not paying attention to: some Iowa providers and hospitals may not be following evidence-based practices and opportunities to improve maternal health.

As much of what I will be writing about is centered around OB-GYN care, I want to make it clear I am not “anti-OB-GYN." I know many wonderful OB-GYNs, family physicians, and maternal fetal medicine physicians practicing in Iowa, and I am well aware of the challenges they face in their work environments and careers. That said, I also know a lot of OB-GYNs are not following evidence-based practices. In fact, some adhere to practices that are not only outdated, but potentially harmful.

I’ll spare you all the details, but my first birth ended in a cesarean after a failed induction when I was a few days past 41 weeks. Fast-forward to my next pregnancy: I was thrust into the reality that it is difficult to find a provider in the Des Moines metro who is truly supportive of patients wanting to have a vaginal birth after cesarean (VBAC). A future article will discuss the research and evidence on VBACs. Spoiler: many Des Moines OB-GYNs are not following guidelines in this area.

After a lot of research, I started doing shared care with Broadlawns Medical Center and the University of Iowa, where I was able to see the certified nurse midwives (CNMs) for care. In Iowa City I found a (mostly) supportive VBAC environment that disclosed the risks and benefits of both VBAC and repeat cesareans. When my water broke on its own just past 41 weeks, we drove the two hours to Iowa City and our second child was born vaginally a few days later (again I’ll spare the details).

I am confident that if I had stayed with a hospital-based provider in Des Moines, given the length of time from when my water broke to the birth, I would have been pressured into a repeat cesarean due to the misguided policy that once a person’s water breaks, the birthing person only has 24 hours to give birth or they will automatically need a cesarean. This is one of the several outdated practices that I have experienced personally and that I hear about firsthand from birthing people across Iowa. Per research, waiting for up to 48 to 72 hours after the water breaks is safe when meeting certain care criteria.

While I was pregnant with my second child, I wrote to several organizations, including the Iowa Department of Public Health and the Iowa Medical Society, outlining some of these outdated practices I was learning more about. You can read the full text of my letter below. Other Iowans in a local pregnancy/postpartum private Facebook group also signed.

The letter highlights several areas of concern, some of which I discuss further in future posts. Outdated practices still in use are driving an increase in unnecessary interventions (inductions, epidurals, etc.), which lead to more preventable cesareans, which lead to more complications including lifelong health issues and even maternal mortality.

Some of these issues are based on hospital policies, while others are more provider dependent. In some cases the hospital and providers are not always on the same page, which can create confusion for patients. Unfortunately hospital providers and staff tend to treat hospital policies as if they are laws (they are not). Staff often insist that birthing people must comply with a hospital policy, such as not eating while in labor.

With my first birth, at around hour 15 of my 26 hours in labor, I was hungry. The hospital policy was to not “allow” solid foods. I asked if I could have something besides a popsicle or broth and I was told it was not allowed. Eventually a kind nurse brought me toast with peanut butter and said, “Please don’t tell anyone I brought this to you." You can read the evidence on why eating and drinking during labor is safe (and for many necessary) and why this outdated practice continues. During my next birth, nineteen months later at the University of Iowa, I was encouraged to eat throughout labor.

A common challenge in hospital based birth is access to comfort measures for the laboring person that are not pharmaceutical in nature. Currently in Iowa, while some hospitals may “allow” birthing patients to labor in a tub of water--which provides several benefits to the laboring person--they don't “allow” water birth. From what I’m told, opposition from pediatricians informs such policies, even though the available research shows no increase in newborn death or any other bad health outcomes. Per Evidence Based Birth, “although more research on waterbirth is needed, current evidence shows that hospital 'bans' on waterbirth are not evidence-based.”

A common practice among OB-GYNs is to do routine and regular cervical checks throughout the pregnancy, especially closer to the estimated “due date”. The evidence shows there is no benefit to doing weekly cervical exams. Some studies even show an increased risk of breaking the bag of waters prematurely.

During my first pregnancy going to an OB-GYN provider group, I had a cervical check at every appointment. In the last several weeks leading up to my due dates, those checks were uncomfortable with the OG-BYN assessing effacement and dilation. During my second pregnancy with CNMs, I never had a cervical check - it was not even mentioned until week 40, when a midwife asked whether I wanted a check.

Earlier this year, Florida passed a law requiring written consent for any pelvic examination, whether it be done in a hospital setting, physician’s office, by a nurse practitioner. The response from the leading organization representing OB-GYNs was appalling. The group claimed the law would "interfere in the patient–physician relationship."

I am not familiar with any reports of assault including forced cervical checks in the metro, but I do know that the practice of cervical checks is common. It creates a lot of anxiety for birthing people about “how far along” they are, even though effacement and dilation is not useful in assessing when labor will begin and can change quickly once labor starts.

I hope this post provided a glimpse into some maternal health problems that are widespread in Iowa and across the U.S. Simply put, the biggest opportunity to improve care is for providers to start following the evidence and listening more to their patients. (I'll have more to say about that in a future installment.) Part of the responsibility rests with the birthing person, but doing your own research can only go so far. I thought I was well-informed during my first pregnancy, but it is hard to seek out information on things classified under “you don’t know what you don’t know."

My next post will discuss in more detail the need to expand access to midwives in Iowa. Additional posts will cover informed consent/refusal, inductions, cesareans, and other issues facing maternal health in Iowa. If you have a specific interest in a related topic, please feel free to reach out to me at rachel.m.bruns@gmail.com.

__________________
Appendix: November 2, 2018 letter advocating for Iowa to join the Alliance for Innovation on Maternal Health Program (AIM) administered by the Council on Patient Safety in Women’s Health Care. 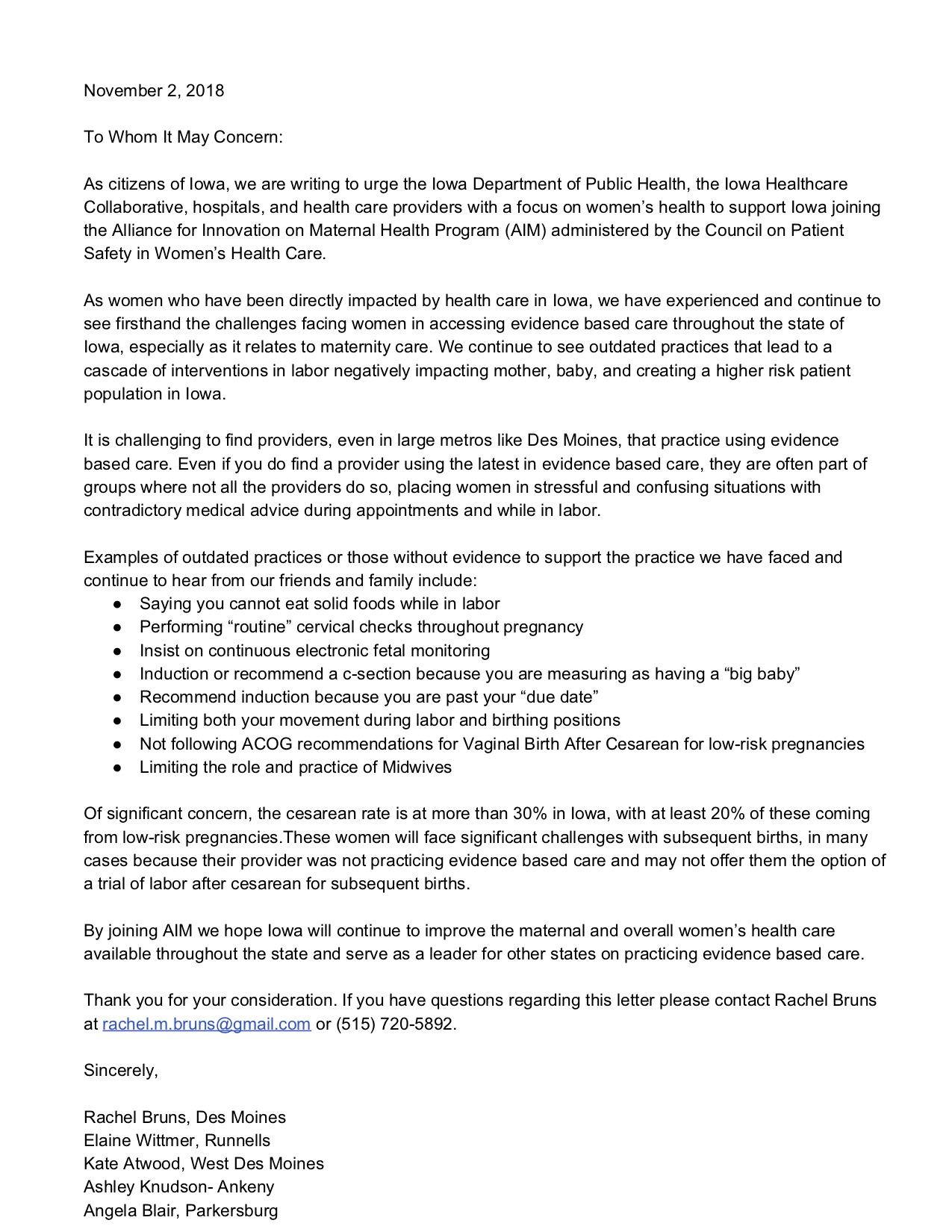 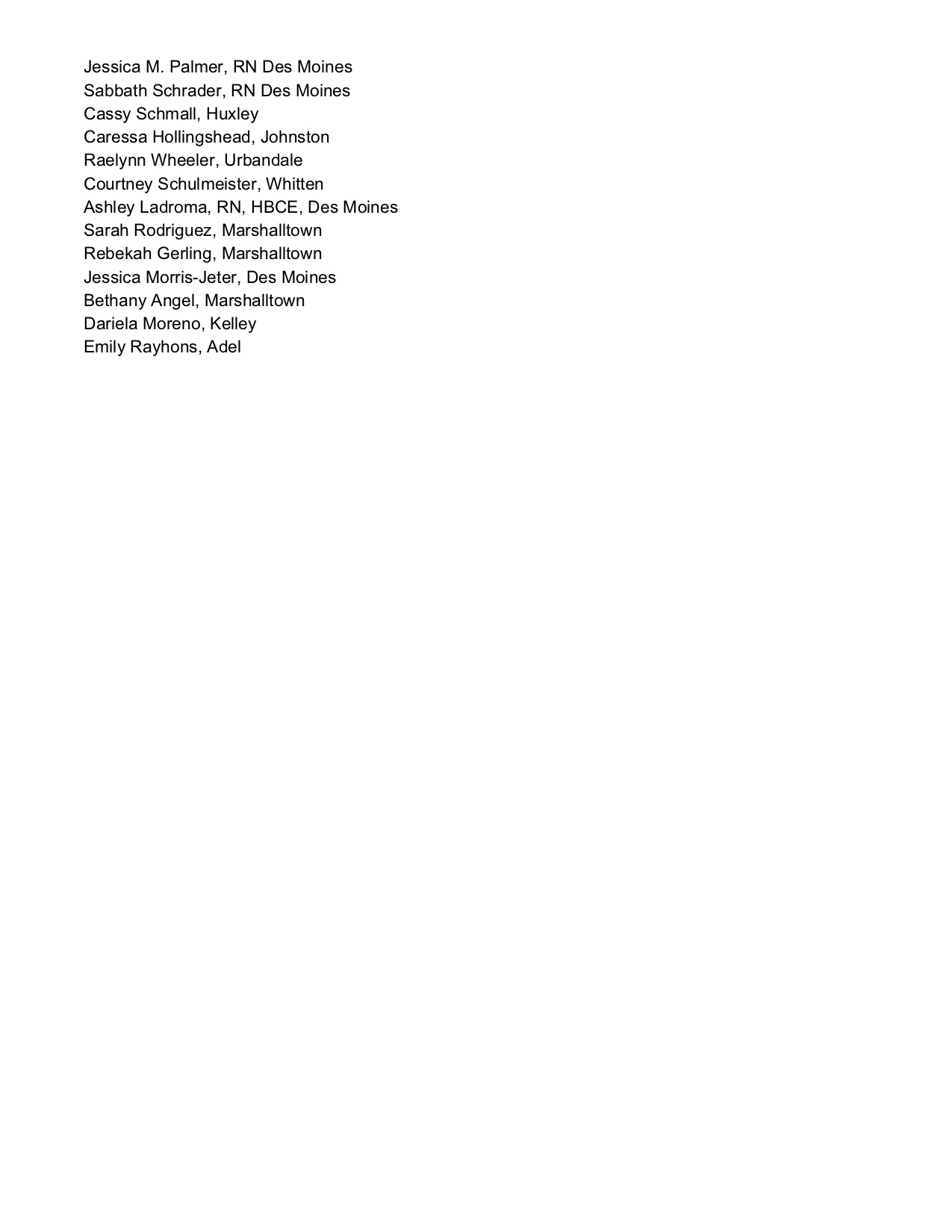