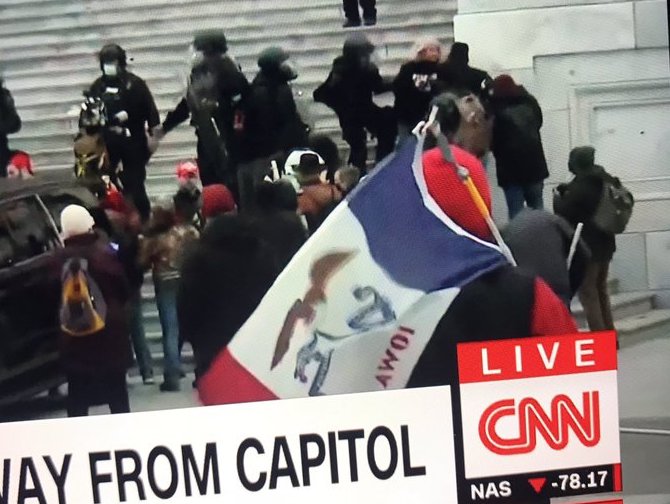 Ira Lacher: “If there were any discussion, Wednesday’s events should eliminate it. Trump needs to be impeached. Again. And criminally charged with inciting sedition.” -promoted by Laura Belin

Wednesday, January 6, America witnessed an armed insurrection. Revolt. Treason. It was fomented by the president of the United States.

The Atlanta Journal and Constitution reported: “Hours before unrest hit the Capitol, President Donald Trump arrived to his rally to embolden supporters to charge the U.S. Capitol Wednesday to show ‘fight’ for his unsubstantiated claims of election fraud ahead of a congressional vote count to affirm Joe Biden’s election victory.”

Although the most egregious examples of treason took place outside and inside the Capitol building in Washington, D.C., it was not a spontaneous occurrence. Protests, albeit nowhere as violent, took place in the capitals of all six states Trump closely lost in the November election and in which certified the election results.

At least one member of Congress has called for Trump to be impeached for inciting this violence. Massachusetts Democrat Seth Moulton tweeted: “Trump is directly responsible for this insurrection and violence. He needs to be removed from office immediately. It is the Constitutional responsibility of Vice President Pence and the cabinet to exercise the power granted them by the 25th amendment. Or Congress must immediately impeach and remove the President for the safety of our nation.”

Republican leaders expressed what could only be described as faux horror at the mob violence they encouraged. “What we are currently watching unfold is un-American,” House Minority Leader Kevin McCarthy tweeted. “I am disappointed. I am sad. This is not what our country should look like.”

Of course it looks like this because McCarthy led a cadre of 143 Republican House members who said they would contest the certification of the Electoral College vote on Wednesday cementing Joe Biden as the 46th president of the United States. The insurrectionists halted the proceedings. But they will continue.

They will do so despite the efforts of the 45th president, who has for months stoked the fires of treason by repeating groundless and illegitimate claims of a “stolen” election — which state after state and court after court refuted. Wednesday, he tweeted this nonsense yet again, in a speech Twitter labeled “a risk of violence.”

All this comes in the wake of a debate as to whether the nation should leave Trump alone to slither under a rock after he leaves office on January 20, or prosecute him for apparent state and federal offenses, including trying to suborn the Georgia secretary of state to overturn that state’s election.

If there were any discussion, Wednesday’s events should eliminate it. Trump needs to be impeached. Again. And criminally charged with inciting sedition. And so should all his toadies.

Trump needs to be brought to account, not only for sowing the distrust of reality that exploded on the streets of our nation’s capital and inside the Capitol but also for wantonly abandoning his oath of office by ignoring a pandemic that has killed more than 320,000 in this country.

I get it — tens of millions support Trump because they are disgusted with the economic and social inequality that has destroyed  jobs, ruined lives, introduced thousands to opioid addiction, and instilled countless Americans with the total antithesis of hope that President Barack Obama made the hallmark of his 2008 campaign. Democrats share at least some of the blame of benign neglect.

I get that many cannot come to terms with a generation of massive economic and social upheaval that has weakened their white, Christian, English-speaking, male-dominated society. I get it that they rallied to a pretender who conned them into believing that he alone could fix it. And that they refused to be dissuaded, despite the evidence of their own two eyes, that not only could he not fix it but also that he apparently didn’t even care to try.

But everyone makes mistakes. The armed insurrection Wednesday that has led to at least one shooting should shame those Trump followers who still believe in the concept of a small-d democratic America and give them reason to renounce their fealty. With them, inside and outside government, there is the very real opportunity for all of us to sit down and confront their reasons for their discontent. Every America owes it to them to try.

And what if they continue to accept the Trump era’s hallmark nihilism?

I don’t have the answer for that. But if they continue, they undoubtedly will cause the historians of the future to write, “Once upon a time, there was an America …”

Top image: Rioters including someone carrying an Iowa flag outside the U.S. Capitol on January 6. From a screenshot of CNN’s coverage of the events.