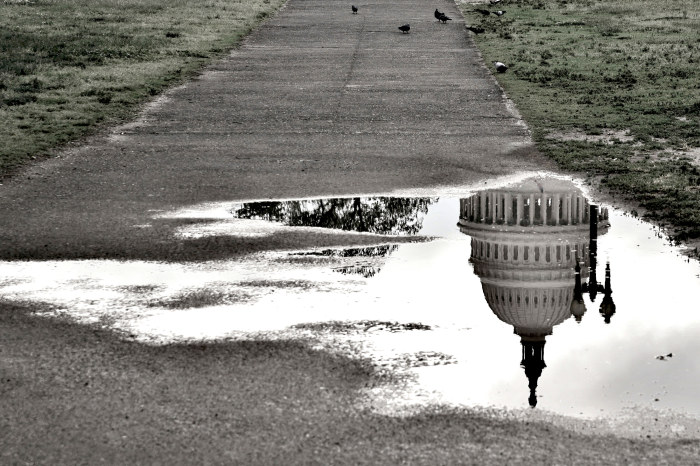 Ira Lacher: The latest U.S. House vote on impeachment may further isolate Trump's running dogs in Congress. They deserve to be isolated. -promoted by Laura Belin

Before the House voted to impeach the president of the United States for the second time in little more than a year, Representative Tom McClintock, Republican of California, pontificated that the president really didn't say what he was documented as saying. “He specifically told the crowd to protest peacefully and patriotically," McClintock claimed.

Uh, no, he didn't. "When you catch somebody in a fraud, you are allowed to go by very different rules," the president said before the riot.

McClintock wasn't the only one to distort reality. "For months, our cities burned, police stations burned, our businesses were shattered, and they said nothing," bleated Matt Gaetz of Florida.

Uh, no, they didn't. During last summer's protests against random police violence against black people, then-Democratic nominee Joe Biden wrote in a statement, “[B]urning down communities and needless destruction is not [right and necessary and part of the American response]. Violence that endangers lives is not. Violence that guts and shutters businesses that serve the community is not.” Added then vice-president candidate Kamala Harris in a speech on August 27, "We should not confuse [peaceful protesters] with those looting and committing acts of violence."

The most sanctimonious on Wednesday was Jim Jordan of Ohio, who on insurrection day led the GOP putsch in the House to reject the certified electoral college results: 306 votes to Biden and 232 to Donald Trump. “It’s always been about getting the president, no matter what," Jordan harrumphed. "It’s an obsession, an obsession that has now broadened. It’s not just about impeachment anymore, it’s about canceling, as I’ve said. Canceling the president and anyone that disagrees with them.”

Who has risen up against the president? Patriots. Because Donald John Trump has abused the powers of his office time and again -- by imposing an unconstitutional ban on Muslims entering America ... unconstitutionally profiting financially from his office ... attempting to quash the FBI's investigations into possible collusion with Russia for the 2016 election ... separating children from their families at the border and imprisoning them in cages ... supporting murderous white supremacists in Charlottesville, Virginia ... denying a pandemic and being directly responsible for a hundred thousand deaths ... pressuring a foreign head of state to dig up dirt on Biden, for which he was impeached in 2019 ... pressuring Georgia state officials to muck up the election returns that won the state for Biden ... and a week ago, inciting insurrection, for which he could also be criminally prosecuted.

The Republicans' other line of deflection Wednesday was about what impeachment could to to "further divide the country." “Instead of moving forward as a unifying force, [the] majority in the House is choosing to divide us further," declared Oklahoma's Tom Cole. (Iowa's GOP members of the House cited the same talking point.)

"Accountability is divisive. That’s the point. If there is a faction of the Republican Party that sees democracy itself as a threat to its power and influence, then it has to be cut off from the body politic. It needs to be divided from the rest of us, lest it threaten the integrity of the American republic more than it already has. Marginalizing that faction — casting Trump and Trumpism into the ash heap of history — will be divisive, but it is the only choice we have."

On Wednesday, Donald John Trump became the first president to be impeached more times than he won election. If his offense had been simply to amass hush money in a secret slush fund, as Richard Nixon certainly would have been impeached for had he not resigned first in 1974, the tsk-tsk that goes along with it, even if Trump weren't removed from office, might be a telling enough stain on his sorrowful Oval Office occupancy.

But Donald John Trump didn't simply amass a slush fund. He didn't simply perjure himself, as Bill Clinton was accused of doing. He didn't try to remove a Cabinet officer against Constitutional muster, as Andrew Johnson was impeached for. No. Donald John Trump was impeached -- by the most bipartisan vote in history -- for inciting a deadly insurrection that cost the lives of five Americans.

Fortunately, the majority of those who represent Americans decided that it was far more necessary to take on the most insidious domestic threat America has faced since the Civil War than it was to be intimidated by sniveling Republican know-nothings.

Last Wednesday's insurrection was well planned by violent white supremacists intent on bringing down American democracy. They have been organizing for decades with this goal in mind. And to save America as the founders envisioned it, we need to confront this menace in our midst.

This Wednesday's vote may further isolate Trump's running dogs in Congress. But they deserve to be isolated, until and unless they realize that they serve not one person, or a twisted MAGA ideal oozing with white-power racism, but a nation of immigrants, of many faiths and beliefs, and of many shades of color.

Wednesday's vote underscored that America is truly united -- as a Constitutional republic against domestic terrorism and insurgency. We must resolve never to lose sight of that purpose, and take on all those who reject it. Regardless of whether they precede their names with "House member." Or "Senator." Or "President."