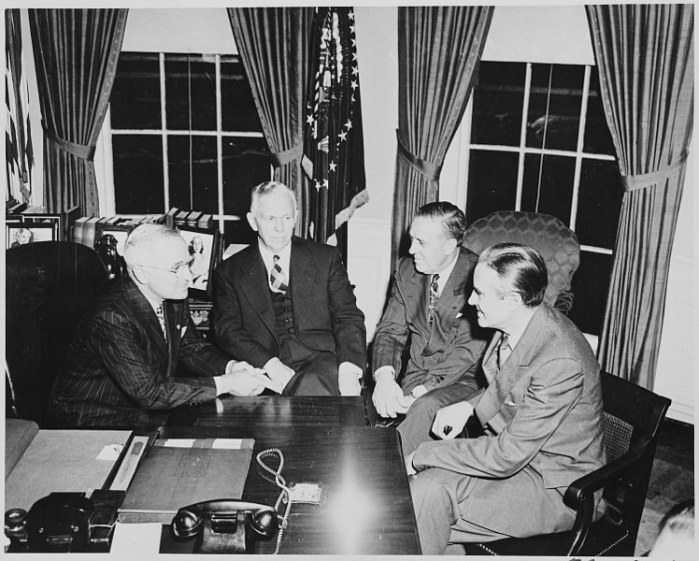 Democrats' survival strategy: Back to the Future

Ira Lacher: To regain the trust of critical voting blocs between the coasts, Democrats need a new Marshall Plan for America. -promoted by Laura Belin

It was in 2016 that Lenka Perron, a self-described long-time Democrat, jumped off the bridge into QAnon hell-hole oblivion.

The suburban Detroit resident told The New York Times how she saw working-class jobs disappear after the passage of the Bill-Clinton-inspired NAFTA trade agreement, despaired over how her preferred presidential candidate, Bernie Sanders, succumbed to what she considered an orchestrated campaign to anoint Hillary Clinton, and lamented that Hillary Clinton’s leaked emails unmasked a let-’em-eat-caviar disregard for those Americans the party of FDR was supposed to champion.

Like Lenka, Republican conservatives and reactionaries gleefully pontificate on how Democrats have failed Americans. But, surprise! They’re not the only ones. Barely six months into Donald Trump’s presidency, Franklin Foer wrote in The Atlantic how Democrats had continually botched their allegiance to the voters of FDR and the message they were conveying:

“Demography’s long arc may yet favor the Democrats but in the meantime the U.S. electoral system penalizes a party with support concentrated within and around metropolises. White voters without college educations remain a vast voting bloc—especially important to Democrats in Senate races and in contests to control state governments. As the Democrats seek to recover, they need a deeper understanding of the forces that have driven these voters beyond the party’s reach.”

Democrats may not have learned that lesson, even in how to appeal to their longtime core such as black voters. Commenting on the morass that has become the city of Baltimore, Osita Nwanevu wrote in The New Republic:

“It is simply true that Black communities within Democratic cities like Baltimore have been struggling without much progress for generations and that their Democratic leaders have often been corrupt, inept, and ambivalent about addressing the problems they face.”

Sadly, even despite the Senate taking the first step toward passing President Biden’s $1.9 trillion COVID-19 relief package on February 5, and with approval in the Democratic-controlled House all but assured, the party of asses is destined to remain the party of “what-the-hell happened in 2022?” unless they can gain the trust of the segment of Americans who remain the core of political critical mass between the true-blue East and West coasts.

And for that, Democrats need a new Marshall Plan for America.

Named after the then-Secretary of State George C. Marshall, the original Marshall Plan was a concerted, massive investment to rebuild war-razed Europe following the defeat of Nazi Germany in 1945. Beginning in 1948, more than $15 billion in direct and indirect aid — $1.5 trillion in today’s dollars — passed between the United States and the United Kingdom, Germany and other western European nations. The plan was intended not only to build up the continent’s economy and create a sustainable market for U.S. goods but also to keep nations from falling into the Soviet Union’s sphere of influence.

Its effectiveness in rebuilding the European economy has been debated, but some historians, such as J. Bradford De Long and Barry Eichengreen, have argued that the plan was an “extraordinary success.” They write, in The Marshall Plan: History’s Most Successful Structural Adjustment Program, “The stability of representative democracies in Western Europe made its political institutions the envy of much of the world.”

Many are now arguing for such a bold enterprise that would accomplish even more than Biden’s COVID relief plan. As envisioned by the University of Pittsburgh and collaborators, the Marshall Plan for Middle America Roadmap would address inequities in middle America, particularly in the Ohio Valley and Appalachia, that include ongoing opioid addiction, as well as access to affordable and reliable health care, broadband, and most, of all, good-paying jobs. “If developed in consideration of existing needs and persistent injustices, these investments could create more sustainable and more equitable economic opportunities in the very communities that otherwise risk being left even further behind,” the overview states.

Writing in The Washington Post, the mayor of Pittsburgh, joined by mayors of Cincinnati, Columbus, Youngstown, and Dayton, Ohio; Huntington and Morgantown, West Virginia; and Louisville, Kentucky, agreed:

“Rather than a “Green New Deal, our plan would seed long-term regional investments in Appalachia’s rural and suburban communities, while leveraging the technological successes of our tentpole cities to assist them. The same goes for our neighbors in the Ohio River Valley throughout the Rust Belt and up to the Great Lakes region.”

Could such a plan come to fruition in the woefully stagnant Congress? It could — if Democrats shaped such an investment as benefiting white working-class Americans, who have voted en masse for Republicans as far back as 1968. The racial aspects of such a commitment would be apparent to many progressives — it could easily be seen as further alienating the black urban populations that Nwanevu spoke of. Left-wing Democrats are already sounding general quarters on what they see as a capitulation to a muddled middle.

But Democrats have gouged themselves a massive doughnut hole by instilling within many, like Lenka Perron, the perception that they no longer care about people like her. While most disaffected Democrats aren’t likely to surrender to the Lethe of seditious conspiracy theory, they could very well continue to forsake the party and empower ever-more-reactionary Republican policies. Those threaten to leave America even farther behind the inexorable tide of worldwide collaboration needed to achieve sustainable energy, resist economic and military disruptors, and most important, eliminate the pandemic and rescue the planet from irreversible climate disaster.